Chillin With Mark at Cap Ferret

There are times when friends can be so generous.  Our friends Chris and Frédérique, a married couple from the San Francisco Bay Area, offered to let us use their apartment on the Atlantic coast of southwestern France for a week.  Frédérique’s parents purchased the apartment as a vacation home for their family in the 70’s. 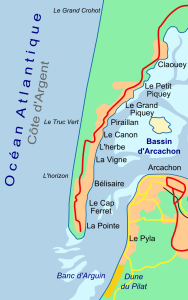 Cap Ferret is about an hour west of Bordeaux, situated on a thin strip of land separating a bay, the Bassin d’Arcachon, from the Atlantic Ocean.

We can only imagine the fond memories Frédérique must have of her formative years in this quaint little coastal village.

We’re almost hesitant to describe Cap Ferret, because it is such an undiscovered marvel, we would hate to ruin it.  In contrast to the crowded, busy, highly-developed resorts along the Mediterranean coast of France, this little jewel on the Atlantic coast is quiet, pristine and unspoiled.  It is understated and atmospheric, a lot like Martha’s Vineyard offshore of Cape Cod.

The apartment where we stayed was in a little oyster village on the bay called l’Herbe.

Our balcony, on the second floor of the building, looked out over oyster beds and dozens of anchored small boats in the bay.  Below is a series of pictures we took showing the view. 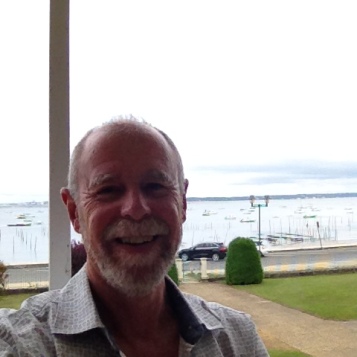 We noticed that the small boats anchored just offshore all changed positions in an almost regimented manner as the tides came in and out.  A few miles south, toward the right in these photos, is where a wide channel leads from the Bassin out to the open ocean.  The boats were tied to anchor balls on their front ends.  As the tide came in from the ocean, it pushed the boats from the front, and they all uniformly turned and faced southward.  Hours later, when the tide reversed and headed back out to sea, the boats would turn and face north.  The change was subtle, but we did catch on, and every day we enjoyed watching the choreography of the boats at anchor as they changed direction in unison.

Our apartment building at l’Herbe was located on an exceptionally beautiful, large parcel of land facing the Bassin.  The property is enclosed by a very old, substantial metal fence with a distinctive style that reminded us of Morocco.  Displayed on a shelf inside our apartment was an old photo of an iconic, Islamic-looking structure.

We learned from Frédérique that the strange building in the photograph once occupied the ground we were on.  It dates back to the 1860s, when a French entrepreneur who made his fortune in Algeria came to Cap Ferret and built a fantastic Moorish-style chalet for himself and his family.  The old building, iconic as it was, fell into disrepair and was demolished.  In its place today stands the comfortable (if somewhat nondescript) modern apartment building where we stayed.

The property retains an old, settled feel, with massive cypress trees from the 19th Century, and the original metal fence with the Moorish design erected in the 1860s.  It is a unique and very special place, situated in an ideal location directly on the waterfront.

We have previously mentioned our five kids, from our prior marriages.  In descending age order, they are Frank’s son Connell, Frank’s son and John, Brian’s daughter Katie, Frank’s daughter Naomi, and Brian’s son Mark.

A highlight of our visit to France was that Mark, age 24, joined us for a nice long stretch, including a portion of our week at Cap Ferret.   He’s been traveling in Eastern Europe himself this spring and summer.  He flew over from Budapest to join us for a total of eight days.

The quiet waterfront apartment in l’Herbe was the perfect nest for the three us to enjoy some low-key, quality family time.  We had wonderful meals together, mostly home-cooked, including plenty of fresh oysters.

One sunny day, the three of us headed to an ocean beach on the southwest corner of the cape to watch the waves.  There we discovered large concrete blocks half buried in the surf and sand.  We speculated among ourselves about their origins, but as we came to learn later, they are bunkers that were part of Hitler’s defenses during World War 2 against allied forces landing on the coast of France.

Bunkers can be found up and down the Atlantic coast of France, all the way to Scandinavia.  The French have done little to preserve these unpleasant pieces of their history.  Nor have they undertaken the effort to remove them.  At Cap Ferret, the bunkers are slowly slipping into the ocean as the sandy foundations give way.

They were fascinating to see and for Mark to explore. 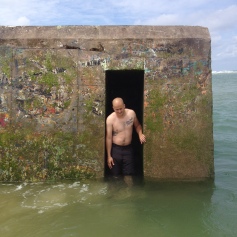 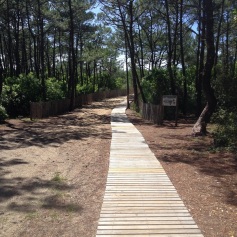 We are extremely grateful to Chris and Frédérique for their generosity in offering us this amazing, tranquil refuge for a week on the Atlantic coast in southwest France.