We Love Paris When It Drizzles

We closed out our month in France with a two-week visit to Paris.

The time was late June, and the days were gloriously long.  There was a mixture of intermittent showers and sunshine every day.  We had the drizzle of winter, interspersed with brilliant sunshine.  It was the very cusp of summer, and absolutely beautiful in Paris.

The rains made the flowers, bushes, grass and trees lush with new life.

Like every river we had seen in France this spring, the mighty Seine was almost at flood stage, its waters rushing and brown from the heavier rains a few weeks earlier. 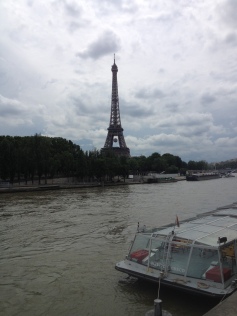 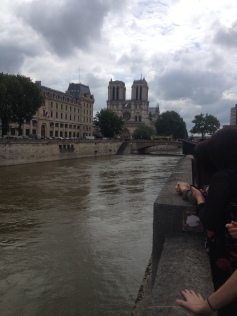 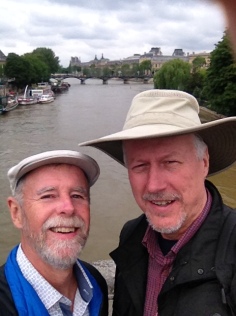 Two Weeks To Do As We Pleased

Two weeks is a luxuriously long time to stay in Paris.  We had a quiet, spacious old apartment in the Marais, one of Paris’s most historic neighborhoods.  It affords easy access all the major tourist sites in Paris. 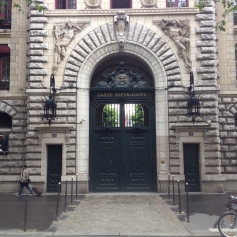 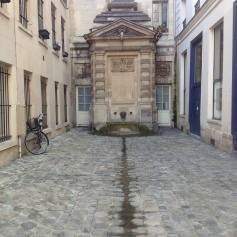 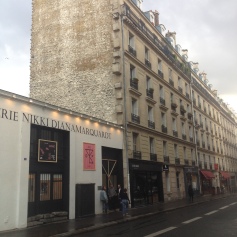 We had our first sojourn in Paris more than a dozen years ago, in 2003.  It is an undeniable reality that a person cannot visit Paris for the first time more than once.  The particular thrill of seeing Paris with fresh eyes, like the magical experience of first meeting that special person who became your husband or your wife, simply cannot be repeated. 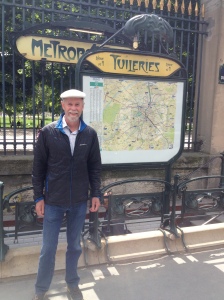 But Paris, like a devoted lover, opens her rich and unique variety of experiences to the return visitor.  The longer the visit, the more she reveals.

We took in quite a lot, and it is also the honest truth that we grew ever more intimate with one another, during our two weeks alone in Paris in June 2016.

We had the joy of asking ourselves, every morning, “What do we want to do today?”

We were living in Paris.  Whatever we wanted to see in Paris was only minutes away.

Just around the corner from our apartment was the Place des Vosges, a beautiful and perfectly preserved palace and square from the 16th Century.

On sunny days, the square was full of ordinary people, mostly locals, including many families with children.  Everyone was enjoying the green grass and open space designed centuries ago for the royalty and their guests. 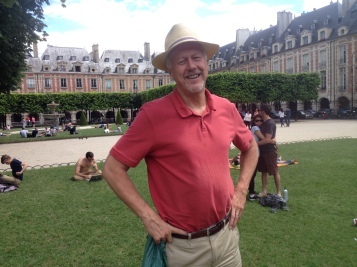 One evening, as we headed out to dinner, one of us (shown below) posed for a photograph on the street, Abbey Road style, as we entered the square.  The poor photographer (the other of us) was nearly run down by a speeding motorcycle.  Yikes! 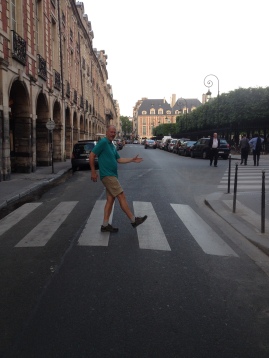 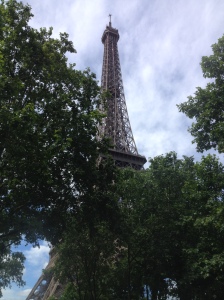 On a sunny day, we visited the Eiffel Tower.

As we approached on foot, we saw a tremendous line of people queued up for tickets.  It looked as if six or eight tour buses had arrived at the same time and discharged all their passengers for a tour

We had no desire to wait in such a long line, so we decided to content ourselves with looking up at the great monument.

Besides, we reasoned, you can see the Eiffel Tower from all over Paris.  That was enough for us! 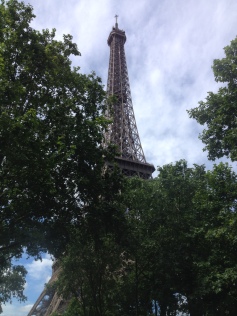 But, behold, we then walked around to the opposite side, and found to our surprise that there was almost no line over there at all.

Up we went, to the top.  It was a gorgeous day, crisp and bright, and the views were unforgettable. 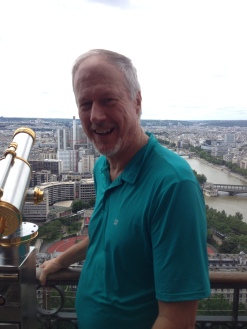 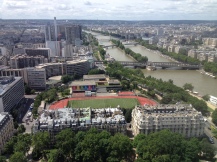 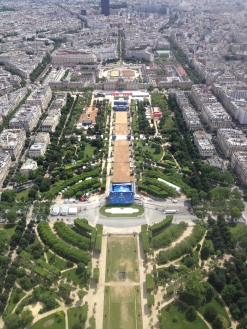 Another day, we toured the Musée d’Orsay, a converted 19th Century railroad station where the Louvre’s collection of impressionist and modern art is displayed. 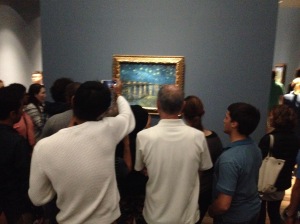 The place was mobbed, especially around some of the most famous impressionist paintings.

People these days crowd around the paintings, taking photographs with their cell phones.  It seems pointless and intrusive.  Why not just purchase prints of the paintings in the gift shop?  But, no matter, we love visiting the d’Orsay.

So, we were among the tourists who crowded — and shamelessly photographed — this favorite painting. 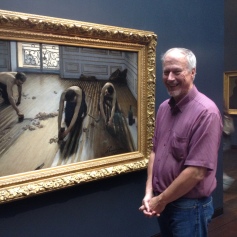 The paintings, especially the impressionist collection, are the main draw at the d’Orsay, but the sculpture collection is also remarkable.

We were both drawn, no surprise, to all the male nudes.

But there was one statute, called Le Desespoir, by the French sculptor Jean-Joseph Perraud in 1881, that had an immediate and lingering emotional impact.

It is a young man, nude, in the throes of despair.

Only an affair of the heart, one supposes, could have such an effect on one so young and so beautiful.

Paris, along with other cities in France, has been subjected recently to brutal terrorist attacks.

Life goes on as normal, but we were reminded of the threat by the presence of armed soldiers in the streets and in the underground, and caravans of heavily armed police vehicles with noisy sirens and blinking blue lights.

Our visit in June also coincided with the European Football Championship, hosted in Paris this year.

This big, multi-national  sporting event certainly would account for an  acute level of alertness by the authorities.

But (thankfully) the most dangerous thing we witnessed were occasional drunken football hooligans whooping it up on the streets.

The soccer fans were boisterous, and sometimes a little gross, but harmless.

The Night Of Music Everywhere

On the 21st of June, the Summer Solstice, we traversed the Marais, heading north toward an obscure little Thai restaurant we had read about in a guidebook.

We had no idea, but we quickly came to learn, that this was the night of the Fête de la Musique, a special night of music on the streets of Paris.  The festival happens only once a year, on the 21st of June.

Musicians perform on little stages in the streets and in churches and cafés all over Paris, practically any kind of music you can imagine, from classical to folk and American popular music.

Almost every block featured an outdoor stage, sometimes more than one.  As we strolled along after dinner, it seemed as if the music and the crowd from one stage would almost bump into the neighboring stage, but somehow it all flowed amicably and without a clash.

The first group we saw, pictured here, was an amateur orchestra of adults and children who performed in a beautiful old church resembling a Roman temple.

The French have a great love of music.  We were enchanted to see how universally everyone in Paris, regardless of age or ethnicity, seemed to embrace the Fete de Musique on this magical night.

It was also sort of characteristic of our travel adventures to stumble upon such an event, completely unaware beforehand of its existence.

What a special night it was, like New Year’s Eve!

The next day, we saw a huge quantity of wine, beer and soft drink bottles, deposited neatly by a full recycle bin on the street, like a shrine.

It was a fitting tribute to all the fun the night before.

One Fine Evening On the Canal Saint-Martin

At the Thai restaurant, on the same night as the Fête de la Musique, we met a nice younger couple at the next table.  They were both native Parisians.  It was the two of them who educated us about Fête de la Musique. They also were happy to share a recommendation about an aspect of Paris not accessed by most tourists – the Canal Saint-Martin. 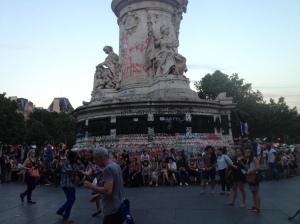 Off we went the next night. We took a bus to the Place de la Republique, a vast and very lively public square with a slightly rough edge.

It was very different from the touristy plazas in the heart of Paris.  The monument in the center was covered with graffiti.  There was a display of  posters of refugees from Syria and Afghanistan, with their personal stories.  The plaza was overrun with large and diverse throngs of local people, most of them just hanging out and enjoying the pleasant evening — and, oddly enough, a group of ballroom dancers with their own loudspeaker system. 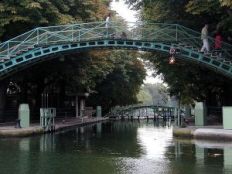 A few blocks from the square, we found the Canal Saint-Martin.  On a warm summer evening, it is a magnet for young Parisians.  They line both sides of the waterway for almost a mile, hundreds of young people drinking wine and beer and eating picnic-style dinners.

The mood was festive and relaxed, and the conversations were animated.  We seemed to be the only Americans there — and the only people in our age bracket.

If you want to know what it is like to be young and Parisian, try visiting the Canal Saint-Martin on a beautiful evening in late June. 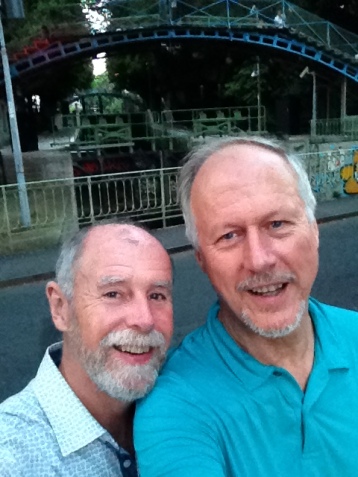 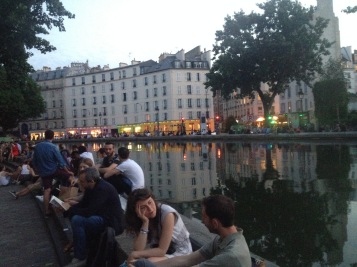 One day we crossed the Siene and toured the Palace de Justice.  It is both a beautiful, functional courthouse, and, in the basement, a museum commemorating the reign of terror under Maximilen Robespierre.

It was here that thousands of people were held in filthy, dank, crowded cells and condemned to death before being guillotined.  It also is the place where Marie Antoinette met a similar fate, although her cell was nicer.  In the end, Robespierre himself was beheaded on the guillotine.

All over Paris, there are reminders of the Revolution.  It is sobering to contemplate that an event that began with such noble ideals descended into a bloodbath.

On the wall of the Catholic Church in our Marais neighborhood, the historic Saint-Paul-Saint-Louis, we saw inscribed the names of priests and other religious figures who were put to death during the Revolution.

What struck us about the French Revolution was how convulsive it was in French society.  By contrast, our American Revolution of the same era was far tamer.

We mentioned at the outset the lushness of the foliage in France this spring, in the wake of all the heavy rains earlier in the season.

An outstanding example was the Luxembourg Garden, adjacent to a 17th Century royal palace, on the day of our visit, on a vibrantly bright Sunday afternoon.

The Luxembourg is an especially beautiful and well-maintained public park in the very heart of Paris.  Parisians are fond of their parks, and can be found there in great numbers in fair weather.  We were delighted to be among them. 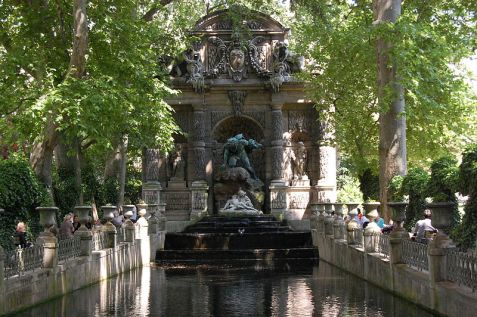 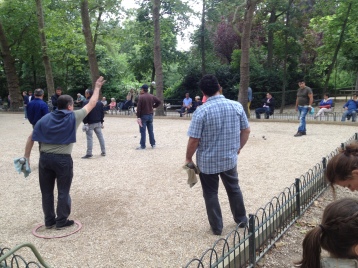 The Continued Joy Of Home Cooking

During our two weeks in Paris, we prepared our meals at home as often as not.  We treasured the experience of shopping for food in France, and then cooking it in our own kitchen.

Even on the nights when we ate out, we often fixed hors d’oeuvres at home before leaving.  Our typical plate included pâté, olives, blue or roquefort cheese, cured meats and fresh fruit, accompanied by red wine.

Just across the street from our apartment was a very nice boulangerie. 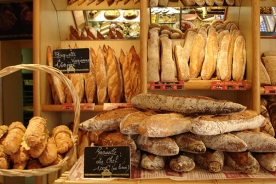 Almost every evening, we stopped by the boulangerie to purchase a fresh baguette, still warm from the oven.  The cost was the incredibly modest price of only one euro ten cents.

A daily, fresh baguette is one of the great joys of living in Paris, especially when shared with the love of your life. 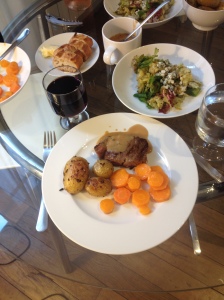