We flew from Marrakesh to Marseilles, and from there we launched our excursion into the South of France.

In contrast to Spain, where we traveled exclusively by train, in France we rented a small car, because most of our destinations were not accessible by rail.

We spent our first night in France in the delightful, touristy city of Aix en Provence.  We found a small hotel down around the other side of the main railroad station, on the outskirts of the town center (“centre ville”).

It felt giddy being back in a European city.  We bought a Michelin road map that served as our guide for the remainder of our tour of France.

The main street in Aix was especially crowded with tourists. Consistent with the advice we had followed in Venice a year earlier, we wandered a block away from the main tourist area and found a quiet little bistro.  We sat out front and enjoyed a beer.

The waiter was….how shall we say?….nonchalant.  He made it obvious he didn’t much care for us, but in a way that was utterly impersonal.  We were delighted.  How French!! 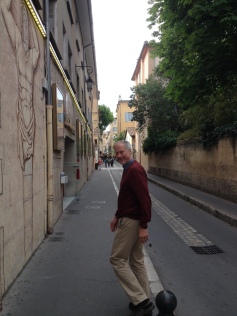 The next morning, there was a street fair on the main street in Aix.  We stopped to enjoy a street musician, an African guy with dreadlocks accompanying a French singer.

Then we headed down to the Mediterranean coast, where we spent a week at a lovely small apartment on the beach near Montpellier.

The ambient temperature was not quite warm enough for beach-going, and it rained at least a bit almost every day.

Still, we had enough sunshine, and the weather worked to our advantage, because the crowds were small.

In our cozy little  beach apartment, we resumed our tradition of home cooking.

Every day, we shopped at the local market for fresh vegetables, a baguette, hors d’oeuvres and a main course for dinner.  Our drink of choice was red wine.

It was ever so relaxing, and romantic, to spend a week at the Mediterranean, with no agenda and no obligations!

Our final stop in the Mediterranean region of France was the ancient city of Narbonne.

Narbonne was a waypoint on the Via Domitia, the Roman road leading to Iberia (Spain).

Poor old Narbonne, its river, once a great channel leading to the Mediterranean, silted up about 500 years ago.  The city’s growth ceased abruptly and it fell into decline.

Today Narbonne has a charming small canal passing through the center of the town.  But its days as one of the great port cities of the Mediterranean are long gone.

A massive cathedral at Narbonne, originally planned to be comparable in size to Notre Dame de Paris, was only partially built.

It sits there today, a stub.

At first we thought the old cathedral was a victim of riots during the French Revolution, or perhaps bombing during World War II.

The finished portion, though, is beautiful! 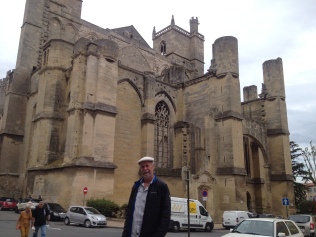 We met a nice German couple outside the cathedral, who were on a bicycle tour. 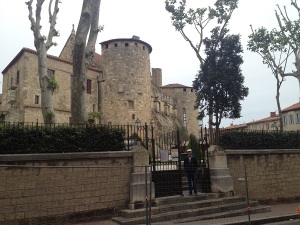 They asked where we had been on our travels, and seemed impressed when we recited the litany of some of the places we have toured — Central and South America, Spain, Morocco.

The husband then inquired, quizzically and with a hint of disapproval, “But why did you come here?”

One thing about Narbonne that certainly bears mentioning is that it was the birthplace of Saint Sebastian, a Roman soldier and early Christian martyr.

Often depicted being shot with arrows, semi-nude, Sebastian is not just a great saint, but also a gay icon.

From Narbonne, we drove north, toward our next destination, Le Bugue.  But that’s another post!