Hot Marrakesh and Our Rooftop Sanctuary 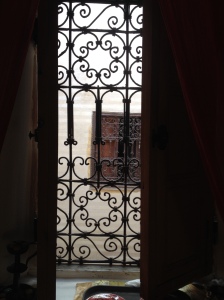 We spent five days in Marrakesh and in that time began to feel more and more accustomed to the culture there, which is so different from our own.  We were especially impressed by the warmth, hospitality and pride of the Berber people we met, and by their artistry.

Exploring The Medina On Our Own

On our first morning in Marrakesh, after our harrowing experience the night before trying to find our way to our “riad” (an old home converted to a small hotel), we wandered out into the Medina, this time in daylight.

The streets in the Medina are more like alleys.  They are teeming with pedestrians.  The feeling a visitor gets is generally very pleasant and hospitable, except for the speeding motor bikes, which to the newcomer are unnerving.

By following small signs, and without any sort of advance planning, we quickly found our way to a small, private museum known as Le Musée de Mouassine.

This museum is a grand, recently (and lovingly) restored 16th Century “riad” or home of a well-to-do family.  It was not unlike the riad where we were staying.

These aristocratic homes were constructed around a central courtyard featuring a fountain and abundant greenery.  Their design is very similar to the Roman style of the First or Second Centuries.

When you step into the courtyard, you enter a place of calm refuge.  With a flowing fountain and shade trees, it is shady, cool and quiet, altogether different from the hot, noisy, dusty streets just outside. 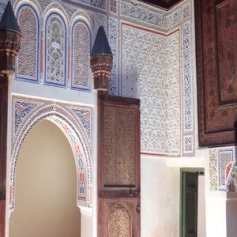 Also on that first day, we visited the Ben Youssef Madrassa, formerly a religious college for (male) students of Islam.  It adjoined the ancient Ben Youssef mosque, just outside the narrow alley leading to our riad.

The madrassa, built in the 14th Century, has not functioned as a school since 1960, but it has been beautifully restored and is open to tourists.  (On the other hand, none of the mosques are open to non-Muslims, and frankly after seeing all the non-observant tourists in churches and cathedrals in Europe, we found this to be an understandable rule.) 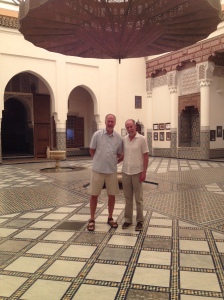 On our second morning in Marrakesh, at the suggestion of Lahcen, the young manager of our small hotel, we engaged a professional guide who escorted us on a half-day walking tour of the Medina.  It was a wise decision

Our guide, like Lahcen, was a native Berber.  He possessed the same keen intelligence and warmth as Lahcen.  He was a university graduate with a degree in history.  (We are sorry to say we misplaced his card and don’t remember his name!)  Both he and Lahcen used the term “Berber” to describe their people, although we later read that others prefer the name “Amazighen.”

In contrast to our experience with the street hustler who guided us through the Medina the night we arrived, our guide was a gentleman and a real professional.  During our half-day tour, we visited many of the sites mentioned in this article, “Landmarks of Marrakesh.”

Our first stop was the Marrakesh Museum, located in a beautiful 19th Century palace.

With all of the historical buildings we visited, our guide (as good guides do) was able to explain a lot about the artistry, craftsmanship, history and architecture.  It really enhanced the experience for us.

Truly the highlight of our guided tour, however, were the “souks,” the dizzing variety of stalls and little markets where craftspeople make and sell handicrafts, foods, spices tools, tiles, fabrics, and a great many other things.  The souks of Marrakesh are world-famous.

Each of the souks has a specialty, such as shoe-making, rug-weaving and production of beautifully dyed cloth.  The techniques they use are hundreds of years old.  Especially interesting to us were the blacksmith shops, where all kinds of metalwork is produced, such as the intricate iron bar window screens seen throughout Morocco.

Our guide knew many of the craftsmen and vendors, and we felt comfortable in his presence.  He greeted many old friends  and acquaintances as we ambled through.  In turn, the locals were courteous and hospitable toward us.

The skills we saw displayed in the souks really opened our eyes to the dedicated craftsmanship and artistry of the Berber people. Their techniques and tools are from another era, but their products are absolutely beautiful.

We hope the little photo montage below will capture the essence of our experience in the souks that day. 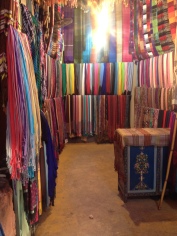 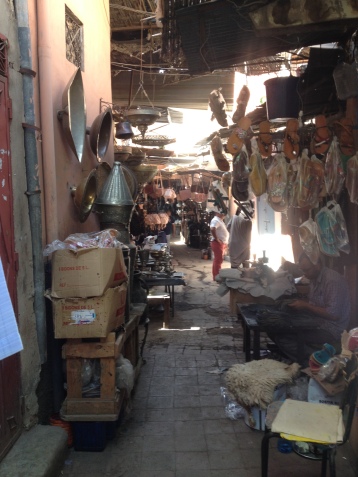 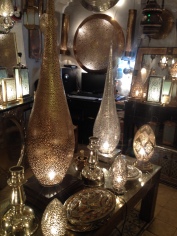 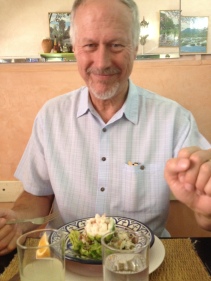 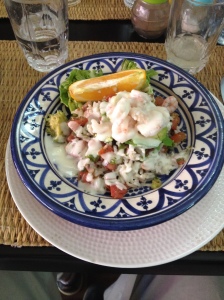 We finished our tour of the Medina with a delicious lunch at a nice restaurant recommended by our guide. He assured us the place was “clean” and indeed it was.  We had the most wonderful seafood salad, served on rice with yogurt dressing.  It was refreshing and  delicious.

Across the street from the restaurant, tucked away behind commercial buildings, was a small mosque, one of several we saw scattered around the Medina.  This was the men’s entrance.

We watched as the men entered the mosque for mid-day prayer, removing their shoes at the entrance.  They emerged just a few minutes later, dispersing out into the crowded streets after the brief mid-day prayer.  It was a scene to remember, an authentic Moroccan moment.

We could see that a great majority of the people in Marrakesh, certainly in the old Medina, are observant Muslims.  Our tour guide said the number is in excess of 90 percent.

Five times a day, all over Marrakesh, you can hear the ritualistic, almost wailing sound of the call to prayer, chanted out by male voices over dozens of loudspeakers.  To be honest, the call to prayer was quite strange to our ears, not like any chant we had heard before. 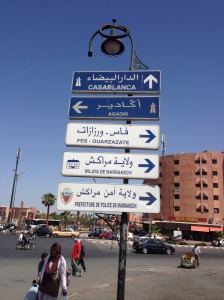 On our third day, we traversed the whole length of the Medina, which was now becoming familiar to us.  We exited the old walled city, out into the modern section of Marrakesh.  It felt strange to be back among automobiles, traffic signals and wide streets.

Our destination was the Jardin Majorelle, a beautiful 12-acre botanical garden.  Also inside the grounds is the Berber Museum, which displays an extensive array of Berber arts, including carpets, jewelry, costumes and handiworks.

In the middle of the garden is a memorial to the French fashion designer, Yves Saint Laurent.

The memorial to a French celebrity from the world of high fashion seemed a little incongruous, almost an affront, there in the midst of this traditional-seeming North African city. 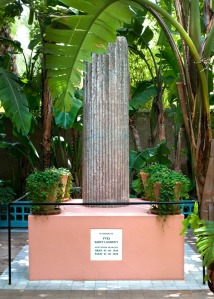 But then we read that Saint Laurent loved Marrakesh, and that he had financed and overseen the restoration of the Jardin Majorelle.  His ashes are scattered there.

The ambient temperature on the afternoon of our visit was very hot, over 100 degrees Fahrenheit.  It was a relief to enter the cool, green garden.  The contrast was striking.

The Jardin Majorelle is a treasure for everyone in Marrakesh, locals and visitors alike. 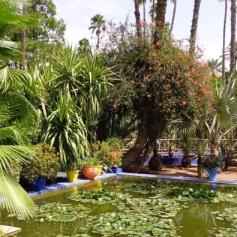 Up On The Roof

Much of the Medina, particularly the souks, is covered and shaded from the sun.  People in the desert have developed many techniques for living in what is really a harsh climate.  There are ingenious water works, operating for centuries, that bring abundant fresh water from the nearby Atlas Mountains and distribute it throughout Marrakesh.

But, still, there is no escaping the fact that walking around Marrakesh on a hot summer day, even at a deliberately slow pace, is very draining.

We enjoyed returning at the end of the day to our peaceful riad, and the cool welcoming feeling of the central courtyard with its fountain and greenery.

After sunset, but while it was still light, we would climb the stairs to the rooftop terrace at the riad.  The terrace featured two pet turtles who lived up there, and, more importantly, a nice, small, deep swimming pool.

Nothing is more refreshing than a dip in the cool water after a long day wandering around Marrakesh.  We had the terrace pretty much to ourselves.

Besides relief from the heat and noise and tumult of the streets below, the terrace also afforded us memorable, sweeping views of Marrakesh. 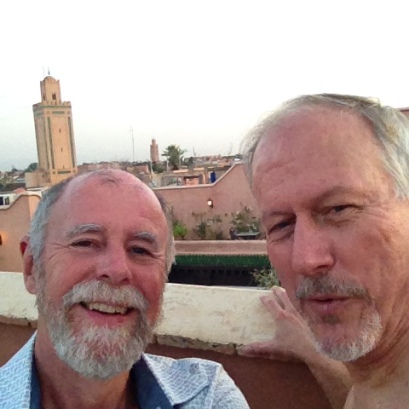 A Study In Contrasts

After five weeks traveling in Spain, and several months prior to that in Central and South America, we found Morocco to be strikingly different in almost every way imaginable.

There are, to be sure, many reminders in Spain of the 800-year period of Moorish rule in the Iberian Peninsula, just across the Straits of Gibraltar.  One such reminder is the minaret at the Cathedral of Seville, the so-called Giralda, which was modeled after the minaret at the great Koutoubia Mosque in Marakesh.

But, in terms of climate, culture, art, religion, geography, or any other measure, North Africa stands apart from the nearby lands on the other side of the Mediterranean Sea.

We are very glad we took the time to visit Morocco, after Spain, and before we went to France.  It added a whole new dimension to our experience.