Rookies, Lost in the Medina

Our first night in Marrakesh, Morocco, was a true immersion experience.

We arrived on the Ryan Air flight from Seville as the sun was setting.  We were armed with the address for our Riad (a luxurious old home converted into a boutique hotel), so we were planning to spring for a taxi and enjoy the sights on our drive into the Medina, the ancient heart of Marrakesh.

This was our first foray into an African country and our first Muslim country too.  We quickly saw that things were different.  At the airport there were no taxis in sight.  We found a guy on the sidewalk who claimed to be a taxi driver, but he had no idea where our hotel was located.  We showed him the map on one of our phones.  He showed it to his fellow drivers, and they debated the location. 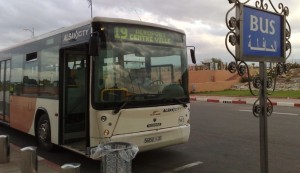 While they were debating, we noticed a parked bus which was heading into the city center so we talked to the driver. After looking at our map he said he could get us to a large square near our hotel and it would be a short walk.  We figured we could get a cab closer to the location so we hopped aboard and paid our 3 Euro fare. 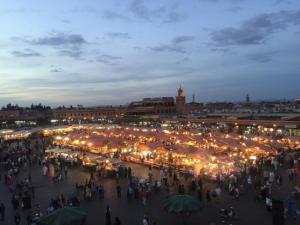 About 20 minutes later, the bus dropped us off at Jemaa el Fna Square, a huge open air market.  It was now dark and the square was abuzz with food stalls, vendors, snake charmers (really), musicians, and many, many more.  The sights and smells were almost overwhelming and very strange to our senses.

And there we were, two wide-eyed obvious tourists, pulling their suitcases through it all.

The bus driver pointed us in the direction of our Riad, saying it was about a 15 minute walk.  Once again, we checked the map on the phone and we headed

off across the busy square, feeling quite out of place and vulnerable.  Oh, and the phone map didn’t even show our Riad’s street, but we knew it was in the neighborhood of a particular mosque, so we headed in that general direction.

We soon discovered why the taxi driver did not know our location.  There are no cars allowed in the ancient Medina area.  There are also no road signs.  In fact, there are no streets as such, just alleys through vendor stalls.  Adding to the sense of danger were dozens of bikes and motor scooters zipping through at incredible speed and agility, threading a narrow path through hoards of pedestrians and shoppers.

The sights were rich, colorful and surreal.  The Medina at night affords a dizzying spectacle for all the senses.  Vendor shops were packed all along the route.  There seemed to be myriad side alleys that all looked the same.

It was getting later and darker, and we were feeling lost and a little helpless in a very strange and exotic new city. 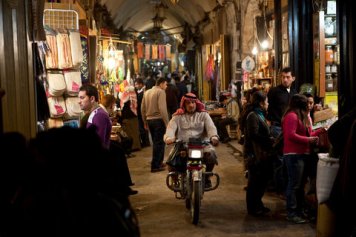 After about 30 minutes of walking, we finally arrived in the vicinity of our Riad.  We had hoped to see a sign for the Riad, but no luck.  We had no idea what was still in store.

From men hanging around an alley, we had multiple offers to help lead us to our Riad.  With little prospect of us finding it on our own, we took one of the guys up on his offer.  He was perhaps a tad more insistent than the others, fueled we came to realize he was, by alcohol.

Our escort started leading us down a series of alleys, deeper and deeper into an unmarked passage between ancient, dark buildings.  At points we all had to duck to get under the five foot ceiling.  Mild panic set in.  We had no idea who this guy was and he was leading us deeper and deeper into back alleys.  Were we going to turn a corner to find five of his friends with knives?

Finally we arrive at a door of a Riad.  In the alley, we offered our guide some coins and he became irate, insisting on 20 Euro for his service.  We knocked and the door was opened by the manager.  Unfortunately, it was not our Riad, and the manager was anxious for us to leave because our helpful guide was getting loud and insistent about his “fee”.

The manager suggested that our Riad was further down the next alley.  So we stepped back out with our “guide”, turned one last corner, and knocked on the door.  It was indeed our Riad at last.  After more shouting, his unsuccessful attempt to block our entrance into the Riad, and the eventual payment of 10 Euro, our guide went away.  We were a little shaken.

We were warmly greeted by our host, Lahcen Benaamer, the manager of the riad.

Lahcen did his best to apologize for the incident.  He offered us hot tea, a Berber tradition to welcome guests.

We then learned that the Riad owner had sent an email the night before, offering to have a driver pick us up at the airport and bring us to the Riad for 15 euro.  Alas, with the hectic travel and intermittent access to the internet, we only found his email after we were settled in Marrakesh.

But, then again, after just an hour, we were now seasoned Marrakesh travelers, not phased by anything the city had to throw at us for the next five days.

To give our readers an idea of the convoluted path into our riad from the closest square on our map, below is a turn-by-turn set of pictures we took a couple of nights later.

We start by entering through the passage to the left of the potted plant.  Each picture captures a different turn on the unmarked passage.  This was the only way in and out of our Riad.  No signs.  You just need to know.

Following a slightly inebriated “guide” may have been a rookie’s mistake in Marrakesh, but frankly there is no way we would have ever found our little hotel without his assistance.  We wish him well.