Happiness is a Cold Caipirinha

We were ecstatic when our longtime friend Dave Brinkley and his husband David Cole offered to fly down to Brazil to introduce us to this beautiful and slightly intimidating country.

Dave Brinkley was a high school exchange student in Brazil for a year in the 1970s.  As an adult he worked for a year in Rio.  He is fluent in Portuguese, LOVES Brazil, and he and David are great travel pals.

Santa Catarina is about ten miles longer than Manhattan and more than twice as wide.  The beautiful island, with a tropical coastal climate, features high mountain ridges, a beautiful large lagoon, and many miles of beautiful beaches with soft brown sand.

We passed through the populous city of Florianopolis just after crossing from the mainland.  We drove out to a remote section of the island, to a small resort town on a strip of land situated between the lagoon and the South Atlantic Ocean.

We hiked for about 5 miles in what the sign posted at the trailhead said was “moderately strenuous” route – easily the most exercise our lazy butts have had since hiking up a volcano in Costa Rica many weeks earlier.  A sweet stray black lab befriended us and followed us for the entire trail. 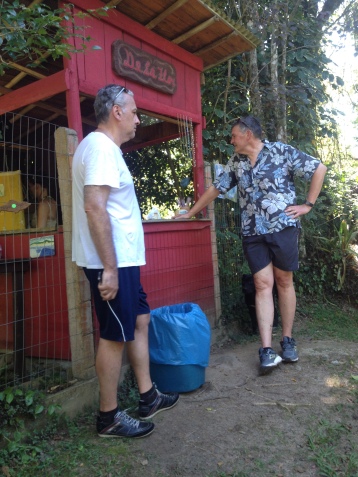 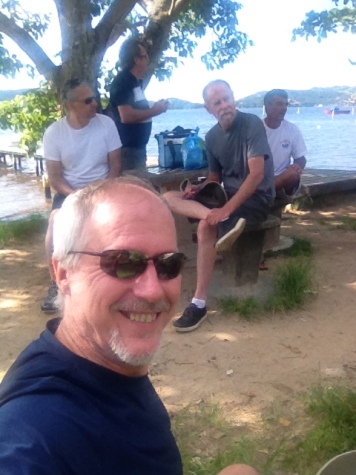 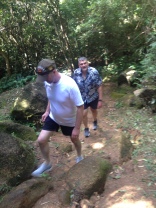 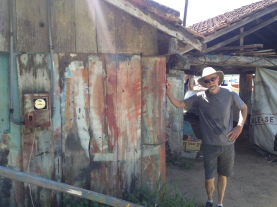 At the conclusion of the hike, we enjoyed a leisurely three-hour seafood lunch at a rustic restaurant right on the edge of the lagoon.

Edson, with a devilish twinkle in his eye, ordered up several rounds of Caipirinhas, Brazil’s national drink.  It is a sweet cocktail made from a sugar-cane-based liquor called “cachaça” (similar to rum but smoother).

The caipirinha is both delicious and socially lubricating. 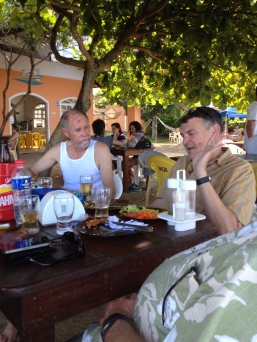 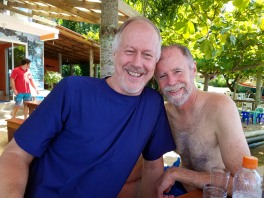 The restaurant setting by the lagoon was serene and beautiful.  Most of the restaurant patrons were dressed in bathing suits, and everyone was barefoot.

For the price of lunch, we also were offered a free ride in a water taxi, back to the dock at the trail head, near our house.  The skipper on the water taxi was a gregarious guy, and he shared the wheel with one of us — and then his young daughter — during the trip back.  It was a glorious day.

Another day we took a drive down the southern shore of the island, to a café in a little fishing village.  The restaurant is famous for the thousands of hand-written notes left by patrons and taped to the ceiling and the walls.   The notes, in every language imaginable, include love notes and witty lines, many of them dating back 40 years to the 1970’s.  Again, we enjoyed more caipirinhas and a lot of laughs. 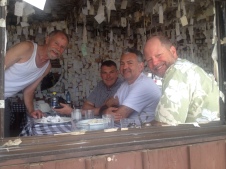 On yet another day, we headed just east to an ocean beach, a beautiful place that featured some outlandishly huge rock formations on the north end. 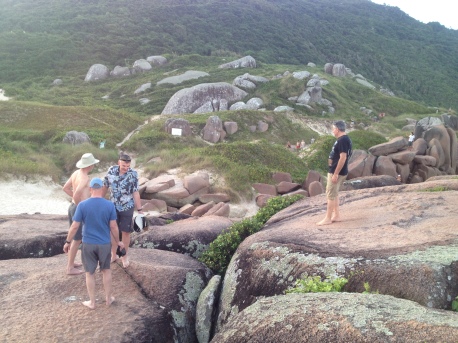 With heartfelt thanks to Dave and David, and to Edson — our high-spirited and fun-loving Brazilian host — this visit to Isla Santa Catarina and 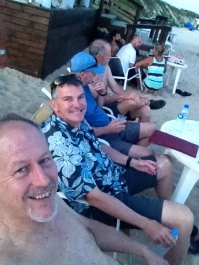 Florianopolis was truly a great introduction to Brazil.

Next, we were northward bound, to Rio de Janeiro (to be continued…)