The Ferry Between Puntarenas and the Nicoya Peninsula 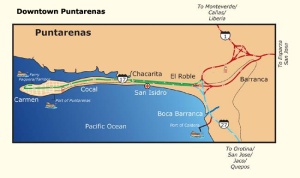 Last fall Brian and I took a 3-week Panama Canal transit cruise from Vancouver, British Columbia, to Fort Lauderdale, Florida.  We made a port stop at Puntarenas, Costa Rica, on the Pacific Coast, and enjoyed a day on shore, touring the rain forest.  Puntarenas itself is a long spit of land that protrudes from the mainland and runs parallel to the coast.  It appears to my eye to be an ideal protected port.

On Tuesday, February 10, as we left Manuel Antonio in our rental car, we had no immediate destination in mind.  Ultimately we knew we wanted to go to the area around Arenal Volcano, several hours away in the mountains of central Costa Rica.  We thought the mountains would complement our beach stay, where we had enjoyed unusually warm weather.  But both Brian and I were feeling the need for some additional beach time.  We were ready to move on from Manuel Antonio, but not quite ready to leave the Pacific Coast.

More on impulse than anything, when we approached the vicinity of Puntarenas, I steered the car in that direction, away from the route that would take us to the mountains.

If nothing else, I reasoned to Brian, it would be interesting to see the port one more time and reminisce about our visit there on the cruise ship.

We drove along the familiar narrow island, heading toward the pier where the cruise ships dock.  We aimed for the ferry terminal nearby.  The area around the ferry terminal was busy and confusing, but we spotted a sign saying a boat was departing at 2:00 PM for a place called Paquera on the Nicoya Peninsula. We checked the time.  It was 1:50 PM.  “Let’s go!”

Brian hopped out of the car and headed for the ticket office.  I steered the car in the direction of the boarding area and took my place in a queue of vehicles, both cars and trucks.  When I approached the attendant, he barked at me in impatient Spanish but then motioned me forward in the direction of the vessel itself.  I felt intimidated and uncertain but there was a sense of excitement in the air because of the impending departure.  Brian soon rejoined me with three slips of paper, one each for us plus a different one for the vehicle.  The total cost was only about $20 US. The attendant firmly commanded Brian to keep walking and not attempt to ride with me in the car.  Each vehicle was allowed a driver but no passengers.  I felt more like a pilot than a driver. The sun was warm and bright.  A strong warm wind was blowing, so strong in fact that it was blowing sand into people’s faces.  A woman carrying a baby kept the child’s face covered in a blanket.  I drove carefully up the ramp and onto the ferry.  The attendants directed me to a spot behind a pickup truck with a trailer attached.  Here the car would remain for the 90-minute journey to our destination.

I took our two backpacks, containing water and sunglasses, and, with my head protected from the sun by my Panama hat, proceeded up two levels to the top deck, where I found Brian waiting.

It was a thrill to pull away from Puntarenas and into the open water.  We had a plain view of the long pier where our cruise ship had docked last fall.  Today it was quiet and indeed it looked as if it had not seen a cruise ship in months.

We were on our way now to the beautiful Nicoya Peninsula.  The southern part of the peninsula is cut off by poor roads, or so we were told, from the northern portion, which in turn has pretty good road access back to the mainland. As a consequence of its isolation, the southern portion of the peninsula has the feel of an island.  In fact, the ferry reminded me very much of the ferry from Hyannis on Cape Cod over to Martha’s Vineyard.

Everyone else among the passengers seemed to be familiar with the ferry and its customs, more so than Brian and I.  They chatted amiably.  We heard no English being spoken.  It was a Tuesday, a long way from the coming weekend, and so the boat was only at about 50% capacity.  But most of the passengers seemed to be vacationers, and most appeared to be native Costa Ricans or visitors from other countries in Latin America.

Brian was drawn to the booming loudspeakers in the bar area, where a would-be disc jockey was playing a variety of Latin and Brazilian music.

As I looked back at the shrinking mainland, I could see enormous clouds covering all the central mountains, our next destination.  I was conscious of the rather extreme contrast between the summer-like weather along the coast and the cool, wet climate of the mountains.

Because of the persistent high winds, the waters of the bay were white capped and rough, but the heavy ferryboat plowed forward steadily with no discernible rocking.  The sun was high in the sky.  Everywhere the views were gorgeous.  Brian remarked that the land and bay resembled what the San Francisco Bay must have looked like before there were cities or settlements there.  I said yes, I agreed, except that it was much warmer here.

We felt like two very lucky guys, to be on an unplanned, inexpensive ride aboard a durable, nice, modern ferry, steaming purposefully across a beautiful body of water along a lush coast, in a warm, scenic and welcoming country.  We had no accommodations reserved, nor even a specific planned destination.  We were on a most pleasant adventure.