The Road Up To Arenal

On Friday, February 12, we got up early in Montezuma and left in time to catch a 9:00 AM ferry from Paquera to Puntarenas. It was a smaller vessel than the one we had taken across to Nicoya Peninsula the previous week, and even less crowded given the early departure.  We enjoyed yet another scenic passage.

Once on the mainland, this time with Brian at the wheel, we commenced the long drive to Arenal Volcano, up in the cloud-enclosed mountains we could see in the distance.  We stopped to fill the gas tank just after disembarking.  The road began to climb almost immediately after we left Puntarenas.

By noon we began to think about food.  We had enjoyed a delicious breakfast of yogurt, granola and abundant fresh fruit in Montezuma, but that was much earlier, before 7:00 AM, and now we were getting hungry again.

We changed roads in a large town called San Ramon (so many of the towns here have their counterparts with the same names in California, and San Ramon is one such example). From here, based on a suggestion from Marcos, the desk clerk at the Villa Roca resort, we took a secondary road for the steep ascent into the mountains.  Just as Marcos had said, we found it to be a relatively quiet and very scenic route.  The alternative route from San Ramon, he had advised, would be more heavily traveled, with more trucks.

Our driving directions through San Ramon were a bit confusing.  They took us on side streets and had us make several turns as we wound our way through town.  We spoke expressly about the advisability of stopping in San Ramon for lunch, as the map showed few other towns for the duration of our drive.  (The next town up is called Los Angeles (or “Angeles” on the map).) But somehow, due I think to the confusing directions, we kept going until we realized that San Ramon now was behind us.  We were back in the country, passing houses and ranches and climbing higher into the hills.  Our options for a meal seemed to have diminished drastically.

Eventually, on the outskirts of Los Angeles, we came to a small market along the road and Brian steered the car into a parking space out front, squeezing past a parked delivery truck that partially blocked the driveway. This seemed like our best and possibly only option for lunch.  But inside we found only bags of snack food and a refrigerator with chilled soft drinks.  There was no food of any substance, not even any fruit.  We nodded to the attendant but left, feeling a bit defeated — and still hungry.  We considered, but only briefly, the prospect of turning back toward San Ramon.  Brian backed the car past the delivery truck, an awkward move, and soon we were on the road again, driving more or less steadily upward into the hills.

A few kilometers later, as we rounded a curve on a downhill slope, we spotted a sign for a “Soda” just a few meters ahead.  In Costa Rica, we have learned that a Soda is a small storefront restaurant, usually if not always open-air, and serving mostly traditional Costa Rican food, which they refer to as “tipical.” The food at these places, we have found consistently, is very good, and the prices moderate.  (Once again, we owe our tiny bit of knowledge to Marcos, the friendly desk clerk at the Villa Roca gay report in Manuel Antonio, who told us about one such place in nearby Quepos.)

Here in the hills below Los Angeles, we were pleasantly surprised to find a soda right along the road.  It came into view abruptly as we rounded the curve and without hesitation Brian pulled the car into a parking space out front.  It was on the left hand, downhill side of the road.  Only one other car was parked there and we could see a couple seated at a table just in front with beers and glasses of water.  They had ordered and were waiting for their food.  Later we struck up a conversation with them and learned they were visiting for the winter from Reading, Pennsylvania.  They were pleased to learn I am a Pennsylvania native myself. (They seemed curiously knowledgeable about free and low-cost health care opportunities for Americans in Costa Rica.) 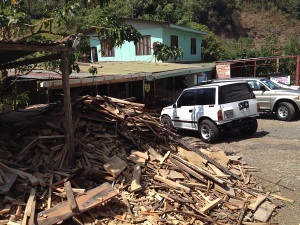 One of the first things I noticed about our soda was a large pile of scrap lumber out front, just to the left of the parking area.  It was unsightly and gave the place the look of a demolition site.  The next thing I noticed was that there was a wood fire burning in a stove, just behind the counter.  The pile of wood scraps was the fuel source for the fire inside.  The smell of the burning scrap lumber was not pleasant but the breeze was strong so the smoke was dissipating quickly. Still, it was not the best of impressions, but we were resigned to the prospect of eating here regardless, as it appeared to be our last option along this windy mountainous road. 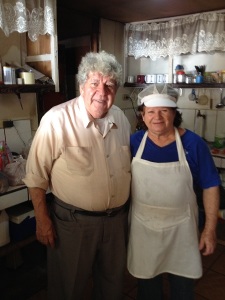 Imagine, then, our surprise and delight, first, when the proprietor proved to be a most welcoming host, with a round smiling face and a great shock of white curly hair.  He looked like a gregarious Irishman.  He knew almost no English but was gently persistent when he spoke to us and we were able to communicate our food order without difficulty.  We both ordered rice dishes, Brian the chicken and I the shrimp (this was a Friday in Lent, the first of them, and I was observing the “abstinence” rule, which prohibits eating meat on Fridays during Lent).  A question was raised about French fries versus salad.  Brian opted for fries, and I chose the salad.

Soon enough the food arrived.  It was a feast, absolutely delicious and in ample quantity, served quite hot.  I asked for “tabasco” sauce, a Costa Rican staple, and our host brought a bowl of homemade salsa with onions and peppers in a vinegar-based liquid, which was also delicious.

Using our best restaurant Spanish, we complimented our host on the wonderful food we had begun to enjoy. “Moi bueno!” we exclaimed.

“Mi esposa,” he explained, gesturing toward the kitchen, was the cook and deserved the credit for the meal.  He then led her out from the kitchen by her arm, both of them smiling broadly, so we could pay our compliments directly to her.  She was as warm and engaging as her husband, and the two had a natural rapport.  It was just as if we were in a pub along a road in rural Ireland, speaking to our genial hosts, but here we were on the edge of a rainforest, in the mountains of central Costa Rica. 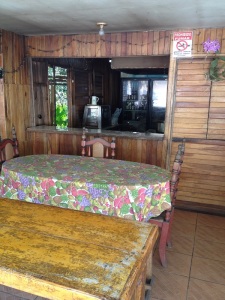 A delivery truck with three young men pulled up.  Our host spoke familiarly with the lead man and enumerated his needs for the week ahead, or so it seemed.  The men then unloaded a batch of grocery items and chatted amiably with the host.  It was clear from their banter that this was an old and regular routine and that they enjoyed each other’s companionship.

I record this in the hope we will never lose the memory of our gregarious hosts at Soda Las Orquidas, on the road to Arenal in the hills above San Ramon.