We met Michael from Baltimore on a bus ride from the beach to our hotel in Manuel Antonio. He visits Costa Rica a couple of times a year, each time staying the maximum three-month visit permitted for foreigners. The salty dog suggested during our five minutes together on the bus that we should make it to Montezuma Beach if we ever get a chance. He described it as a laid-back hippie town. A Costa Rican hippie town? That sounded great to us.

After we left Manuel Antonio, on our way to Monteverde, we thought again about what Michael had said and took a detour to Puntarenas to check into the ferry to the Nicola Peninsula, where Montezuma is located. When we arrived, the next ferry was leaving in ten minutes. Fate. Doors opening. So we drove aboard the ferry and off we went. The most spontaneous vacation decision to this point in our lives together.

ferry was great. Just a little over $20 for us and the car. A 70-minute ride on a slow boat. An open-air ride with a snack bar selling beers. There was a DJ on board playing some great Brazilian dance music.

This delightful Costa Rican woman and I were hanging over the rails, dancing to the music, and talking as much as we could with my limited Spanish. I thought she was with her husband. Turns out it was her brother and half way

into the trip he let me know she was single. I backed off on the dance moves a little once I better understood the situation.

shore we drove for about an hour on a small paved road, then on a dirt road for another twenty minutes until we arrived in Montezuma. We were beginning to doubt our decision along the way as there was very little sign of life along the way. And then we pulled into Montezuma. Truly a treasure if you like an extremely small hippie town located on a beautiful string of beaches.

We only came to check out the town and stayed three nights. It felt like the trip was beginning in earnest. The first week in Manuel Antonio was great, but spontaneous adventure is truly invigorating. 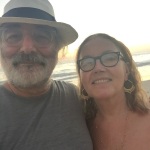 We met a delightful couple on our first night in town, Larry  and Nancy, from Marblehead, Massachusetts. Larry turned out to be a gifted photographer and we made him our official photographer for Montezuma.

So what does a Costa Rican hippie town look like? Well, very few locals. Lots of twenty-somethings living in tents on the beach and selling jewelry from tables during the day. Some would spend all day practicing with their custom made hula hoops. 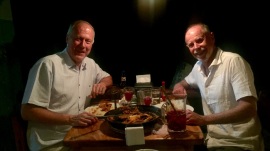 The entire town was two blocks long. After just one day, we recognized many of the faces in town.

The main street is right on the mile-long beach. Being on the inside of a peninsula with a large bay between us and the mainland, the beach had very active surf which seemed to come from several directions. Like in Manuel Antonio, the water was very warm and the waves fun.

After being chastised and cut up by our dermatologists back home too many times, Frank and I played in the surf in our sun shirts and Tilly hats. That’s right, we were absolutely adorable. But the hats and shirts allowed us to stay in the surf for a long time. Heaven right here on earth. 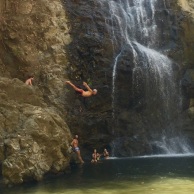 I found a great yoga class held in a large, open-air structure overlooking the beach. There were lots and lots of great, open-air restaurants. We chilled on the beach, swam under waterfalls and just chilled.   Nice.

We had breakfast one morning in a little bakery next to the town’s elementary school. How cute the kids were dressed in their uniforms being dropped off by their parents. Unlike Mexico, Costa Rica has free public schools. Just part of the reason the country is economically doing very well for the region.

So that was Montezuma. Came for visit and stayed three days. Pura Vida!