We have really enjoyed traveling together as a couple, just the two of us, on this vagabond adventure around the world.

We have met lots of wonderful people, and we have seen places we had only imagined before.

In September, however, we were quite happy to break from this pattern, temporarily, on two occasions, once in Rome and the second time in Amsterdam.

In Rome, we met up with Frank’s sister Peggy, her daughter Emily and Emily’s daughter Juliette.

The three ladies were visiting from Philadelphia, Frank’s home town.

In Amsterdam, a week later, we joined our dear friends David and Doug from Berkeley, California.

David and Doug (not to be confused with our friends Dave and David) had booked a weekend in Amsterdam as part of a three-city tour that also included Paris and London.

Roaming around Rome with Peggy and the Girls

Frank’s sister Peggy came from Philadelphia to Rome for five days with her daughter Emily and 11-year-old granddaughter Juliette.

We love Rome, we love these three lovely ladies, so we arranged to meet them for their first visit to the Eternal City.

On our suggestion, Peggy rented the same apartment in the Trastevere neighborhood where we stayed on our last visit in April.

We booked a separate apartment for ourselves, also in the Trastevere, near Piazza Santa Maria.  It was a five minute walk between the two apartments.

Our concern proved to be unfounded.  They were quite content spending time with us.  It was always part of their plan.  We thoroughly enjoyed every minute with them.

We arrived in Rome after a short train ride from Tivoli.  The moment we disembarked at the Roma Termini rail terminal, we were flooded with the joyful feeling that comes from the realization:  We are back in Rome!

Meanwhile, Peggy, Emily and Juliette had flown to Rome from Philadelphia the day before.  They were off touring the Vatican when we arrived.

We had a nice lunch, just the two of us, on a piazza just around the corner from our new apartment.  The weather was perfect, bright and clear.  Gone was the intense heat we had experienced back in April.

Along the way, we stopped at a place we visited last April, called La Prosciutteria, to pick up an hors d’oeuvres platter of meats, cheeses and olives. 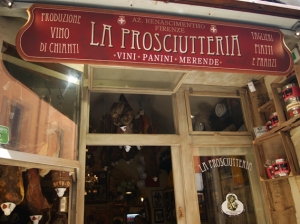 We also bought a bottle of wine.  This was to be a special occasion.

What a happy moment it was when we walked into that lovely old apartment!

Everyone was excited to be in Rome, of course.

But the fact we had managed to converge there for this overseas reunion, so very far from everyone’s home, made it very special indeed.

It is a memory all of us will share for years to come.

The conversation flowed freely over the delicious hors d’oeuvres before we headed out to dinner.

The restaurant we chose was just across the narrow lane from the apartment — the same place where we ate on our first night in Rome back in April.

The proprietress, a kindly lady who spoke no English, remembered us from last time.  How good it was to taste her delicious Roman cooking again!

We spent the next few days sightseeing all over Central Rome, mostly on foot, the five of us.  It was so much fun to tag along with Peggy, Emily and Juliette as they explored the highlights of Rome for the first time.

We escorted them to some of our own favorite sites – the Spanish Stairs, the Trevvi Fountain, the Pantheon, the Piazza Navone. 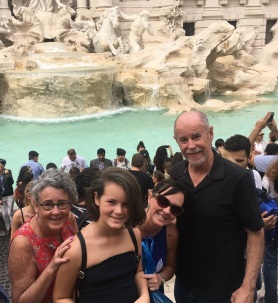 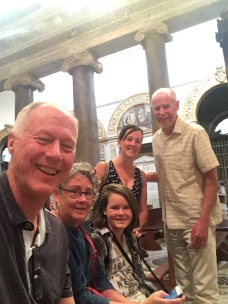 And we all enjoyed uniquely Roman fun stuff, like little cars in a row.  Juliette posed for a picture with a street performer dressed as an Egyptian aristocrat.

Our typical pattern was to meet the ladies in a piazza or a church courtyard after breakfast, and then head off for the day’s adventure.

Our approach to group sightseeing was very low key, with plenty of spontaneity.

“You can’t go wrong in Rome,” was our philosophy.  A grand time was had by all! 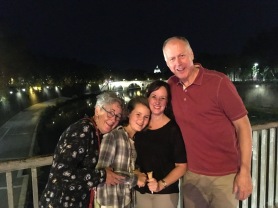 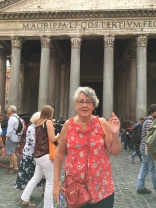 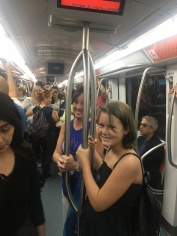 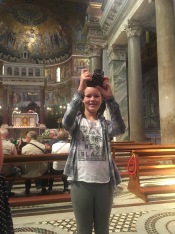 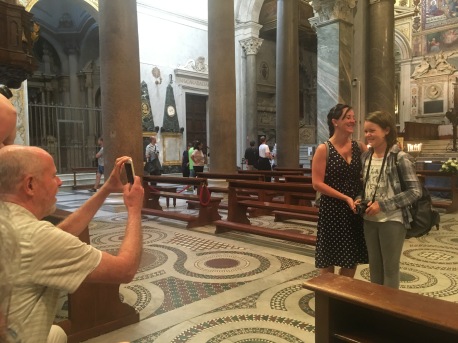 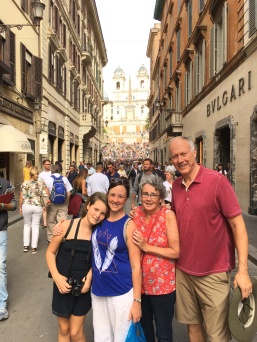 It was a great joy for us to be back to Rome so soon after our previous visit, to see the Trastevere area we had grown so fond of, and to share some of our favorite restaurants, strolls and tourist sites with our loved ones.

When we learned that David and Doug were planning to visit Paris, Amsterdam and London, we began to make plans to meet them.

Amsterdam was an easy choice.  It is one of our favorite cities.

Both couples booked apartments and made plans to hang out together for the weekend.

Our friendship with David goes back almost 20 years, to our days in a support group for married men who were coming to terms with being gay.  (The support group was also where we met as well.)

Living through those tumultuous times together creates a strong bond.

David connected with his husband Doug 15 years ago.

The two of them are among our closest friends.

Our Amsterdam apartment was on an upper floor of an 18th Century townhouse that fronted on a picturesque canal.

The staircase from the front entrance up to our apartment was a classic of its type, a steep winding set of steps characteristic of Amsterdam buildings.

They do it, we suppose, to save space in the interiors of the narrow buildings.

The steps are a little treacherous and certainly not accommodating for people with physical disabilities.  But these staircases are one of the distinctive charms of Amsterdam.  Even the modern buildings have them. 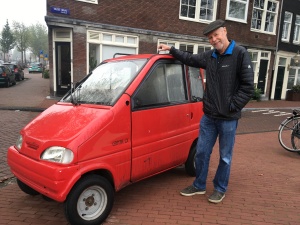 Shortly after we got settled, David and Doug dropped by.  They had walked about mile from their place, which was a bit father out from the center.

As soon they walked in, we felt as if we were never apart.

We had dinner at a nice Italian restaurant nearby, and then strolled around the canals.

Meeting up with David and Doug in Amsterdam was very similar to our reunion with Peggy and the girls in Rome.  In both instances, it gave us a uniquely happy feeling to be back in familiar territory, in a favorite city we had visited only recently, this time sharing the experience with loved ones from back home.

The next morning it was our turn to walk the mile or so back to David and Doug’s place.

They were on the top floor in a cute block of row houses on a quiet lane behind a large brick Catholic church.

We had a cheerful little breakfast with them at their apartment.

Afterward, we strolled through a large park nearby, admiring the Dutch gardening techniques.

Then the four of us caught a tram back into the city center to find a canal boat tour.

Our two technology fans (Brian and Doug) were intently scrutinizing the map on Brian’s cell phone for the location of a canal tour boat company they had identified.

David and Frank, meanwhile, were accommodating them.

They waited patiently as Brian and Doug pointed the phone this way and that, trying to determine the correct direction in which to walk the mile to the boat tour.

Just then, as Brian and Doug were staring intently at the cell phone, David and Frank noticed a canal tour boat cruising past us in the canal, getting ready to tie up at a dock, literally just a few feet from where we were standing.

Brian in the cap

Cap’n Frank at the helm

Doug in the cap 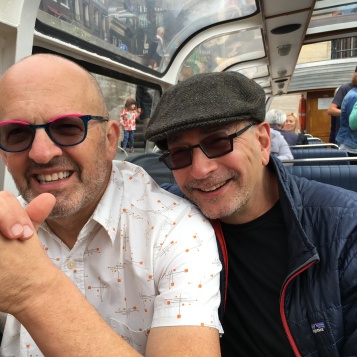 David in the cap, with Doug

David and Frank, the low-tech guys, handily won the round.  They pointed out the waiting boat to Doug and Brian.

In a minute’s time, we had purchased our tickets and boarded the boat.

Seeing Amsterdam from a canal boat is a wonderful experience.  It would be a pity to visit Amsterdam without taking some sort of boat excursion on the canals.  We all really enjoyed the outing.

Later that day, David and Doug had booked a tour with a guide, so we would be on our own.  We parted company after a nice lunch.

That night, the two of us did a little nostalgia tour of our own, walking through our favorite sections and stopping for a beer at a gay bar.

At the border of the Red Light District, we saw four nice-looking middle-aged men approaching, holding large red flags.  They proceeded to stand on four corners of the crowded narrow street, silently holding up their flags.

We asked one of them to explain.  He told us it was a protest without words, intended to draw attention to the demeaning and exploitative sex trade, and the difficult lives of the young women who work there as prostitutes.

“We want to show there is another way,” he said.

We guessed they were probably affiliated with a church or synagogue.  It was certainly a charitable and dignified response by some thoughtful Dutch men to the testosterone-driven seediness of the Red Light District.  Good for them!

The next day we took the tram to meet up with Frank’s cousin Bart.

It was great seeing Bart again.  We met at a bar he referred to as his “watering hole” for a couple of beers, in the late afternoon.  We enjoyed catching up with him.  He’s getting ready to launch his own web design business. 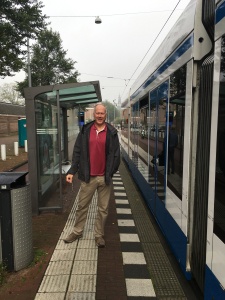 Then we headed back over to where David and Doug were staying, again by tram.  Their landlady had left them a small bottle of chilled champagne.  David and Doug don’t drink, so we asked them if we could have the champagne.  They gladly agreed.

The four of us went out for a nice dinner at an authentic Dutch neighborhood restaurant, just around the corner from their apartment.

This would be our final encounter with David and Doug until we return home to the San Francisco Bay Area in November.  The conversation flowed freely over dinner, with lots of good laughs.

How precious was the company of all of these loved ones, after months of foreign travel!