Tivoli is a picturesque city about 20 miles northeast of Rome.  It is on a slight rise (700′ elevation) so it also has beautiful views of the flat landscape all the way to Rome.

It has tremendous rivers and waterfalls and so became a favored spot for Romans to build their villas.  Today, tourists primarily know it as a wonderful day trip from Rome.  Thirty minutes by train and they are able to see several beautiful villas.  Our good friend Doug Heaps told us we had to see it, recalling stories of how he and his partner Paul used to come here.  Doug says go, so we went, for four nights in an apartment in old town.

Staying in the old section of Tivoli gave us stone buildings and narrow stone streets.  Many of the streets were pedestrian only.  However, the ones where cars did drive were frightening. 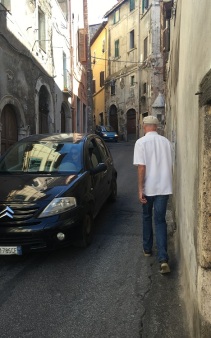 With no sidewalks, we found that Italian drivers would zoom up the narrow streets, allowing pedestrians only a foot or two on either side of their cars.  Most pedestrians seemed totally unfazed by this.  Whether it was a game of Chicken or not we can’t be sure, but pedestrians never make eye contact with the drivers.  They just soldier on, trusting that the cars will miss them.

The Fountains of Villa d’Este

This glorious estate was built in the 1550’s by Cardinal Ippolito II d’Este, a grandson of a pope and a man with a very privileged life (I’m sorry, did you say the grandson of a pope?)  His mother was Lucrezia Borgia, the daughter of the pope.

d’Este was made a bishop at age 2, an archbishop at the age of 10 and a cardinal at age 31.  After his failed attempts to become a pope, he had a falling out with the newly elected pope and was exiled to Tivoli.

Not to be defeated, he immediately began to plan a grand villa, pulling in architects to help with the design.  The defining feature of the villa are the many elaborate fountains. 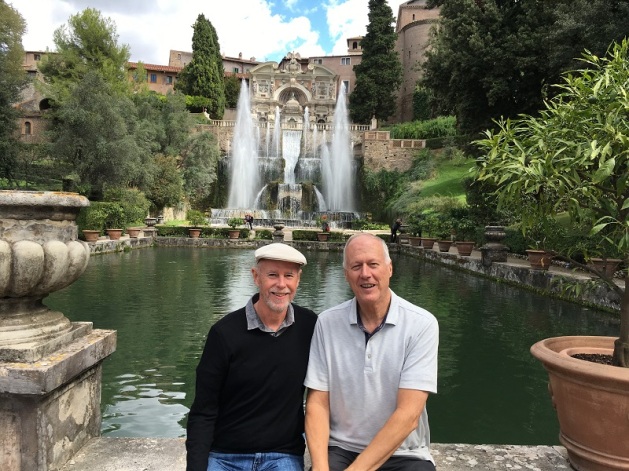 Tivoli has a great water supply, so the cardinal had the ability to build many enormous and luxurious fountains.  Coming from drought-prone California, the abundance verged on decadent. 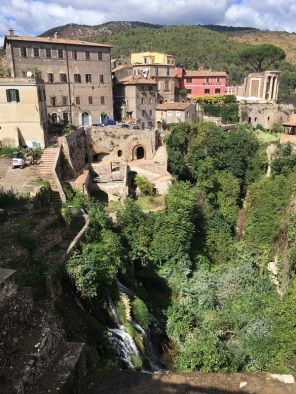 The Aniene river runs from the Sabine Hills and through the center of Tivoli into a large gorge.  Back in the day, the waterflow was enormous and the sound of the waterfalls deafening.

However, in the early 1800’s the town suffered a number of devastating floods.  So in the 1860’s, they built two massive, 280 meter long tunnels to divert the water away from the center of town.  There are still numerous falls in the gorge, but they are controlled by man.

We were able to walk along ancient trails down into the gorge and back up the other side. Down near the river were a number of old Roman structures.  This was a party place back in the day. 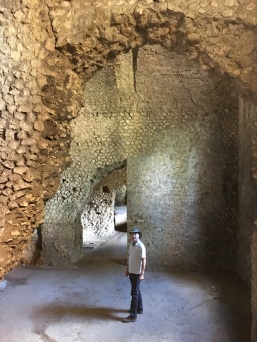 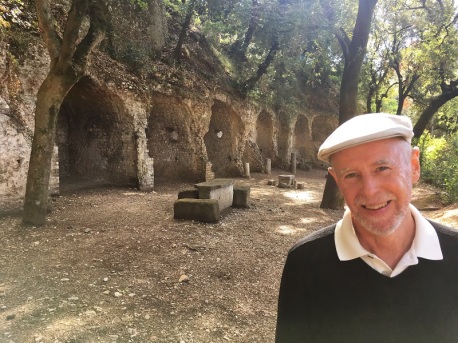 We found beautiful wooded areas, rushing water everywhere and at the end of the trail ascending into a Roman temple built on the crest of the gorge.

In the 1st century, at the height of the Roman Empire, Emperor Hadrian ruled the vast empire for 31 years.  He was not keen on the Imperial Forum in Rome, so he built a huge villa as a royal retreat in Tivoli.  In the later years, he simply ruled the empire from Tivoli.

We walked the few miles from town out to the villa along roads and paths used in Roman times.

As with many ancient Roman sites, most buildings were reduced to stone walls.  However, to walk around the massive grounds is to start to get a feel for the former grandeur of the place. 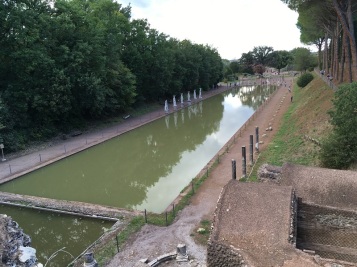 At least 1,000 people lived in the villa, including the emperor, guests, military and hundreds of servants.  It was really a small city.  There were several baths on the grounds with elaborate tunnels below the floors where fires were maintained to heat the waters and the saunas.

Tivoli is quite an interesting place, with a very rich history.  We were glad we had the chance to stay there for several days, rather than just visit on an excursion from Rome.  It made us feel like locals — so superior to all those day-trippers!