Separated by the mighty Danube River, the two cities of Buda on the west bank and Pest on the east were finally united as one metropolis only after the first permanent bridge was built across the river in the 19th Century.

Even today, the twin cities that comprise Budapest retain distinct identities, beginning with their geography.

We stayed over in Pest, which is flat, energetic and commercial.  Pest resembles Vienna, although not quite as prosperous, with its handsome old apartment blocks.

Buda, on the other side of the Danube, features hilly terrain, lots of natural hot springs, and the remains of a vast royal palace that was largely destroyed during World War II.

The apartment we rented in Budapest was especially nice.

Our building was situated right on the edge of a pedestrian-only zone that was lively and fun.

Our unit was in the back of the building, on the top floor, so it was peaceful and very quiet, despite its central, hip location.

It afforded us an ideal base for exploring Budapest. 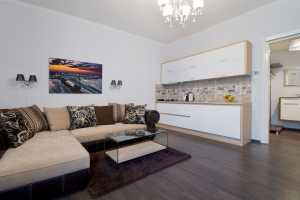 A couple of impressions about Budapest linger for us.

First, when we disembarked from the train that brought us from Vienna and exited the old railway station, it reminded us of Havana.  The building looked quite dilapidated.

As it turned out, the central railway station had a very grand front, appropriate to a major European capital city.  We had exited the building through a side entrance.

It was only along the side of the enormous old building that the authorities had allowed it to deteriorate.

Our first thought, though, was, “Wow!  Here’s another reminder of the one of the downsides of Communist rule — poor maintenance of the grand, older buildings.”

Still, Budapest does have a work-in-progress feel that distinguishes it from Vienna, which is like a rich older sister.

For example, we discovered what is known as a “Ruin Bar” in the old Jewish Quarter on the south side of downtown.

It was on a street where many of the buildings were abandoned for a time when the Communist government was still in place.  Gradually the buildings are being reclaimed and redeveloped.

In some instances, however, and the Ruin Bar was one, they have preserved the building in its deteriorated state, and, using kitschy decorations, have transformed it into a tourist attraction.

The Ruin Bar was lively and fun.  We had a date there with a nice Australian couple, Mary and John, who we had met on a walking tour earlier that same day.

We all really enjoyed the Ruin Bar, with its quirky charm.  Mary and John were delightful people, so friendly and down-to-earth.

Our second and more profound impression of Budapest was the power of the Danube River, which passes through the city and separates Pest from Buda.

The Danube is a massive river with the strongest current we have ever seen.  It is almost frightening to watch.

Although the beautiful and famous waltz composed by Richard Strauss is called “Blue Danube,” the waterway we saw was more gray than blue.

But the Danube certainly is worthy of a great musical composition.  It is truly a phenomenon.

Buda and Pest are linked by a series of majestic bridges across the Danube, each of them a feat of engineering.

How do you build a bridge across such a wide and swift-running river?

The construction surely must have been quite a challenge.

It is all the more impressive, therefore, that the people of Budapest actually rebuilt these bridges after they were destroyed during fierce fighting in World War II between the Russians and Nazi Germany.   That was quite an accomplishment!

A Classical Music Concert and a Turkish Bathhouse

Over on the Buda side of the Danube, up on the hill by the old royal palace complex, sits the 12th Century Matthias Church.

It is a particularly beautiful church with quite a rich history.  This was where Hungarian kings were crowned.  The great church was converted into a mosque during period of Turkish rule, and then reclaimed as a Roman Catholic Church upon the expulsion of the Turks in the late 1600s. 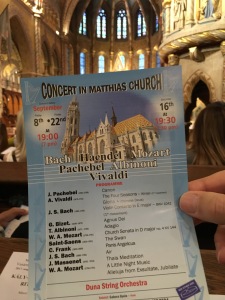 We purchased tickets for a performance by a chamber music ensemble at Matthias Church on our final night in Budapest.

Our new Aussie friends, Mary and John, were there as well.  It was fun to see them again.

The format was similar to a concert we attended last year in an old palace in Prague.  For each of the featured compositions, the musicians select just one movement for their performance, usually the movement most familiar to average people.

It’s a sort of “greatest hits” approach to classical music, geared more for tourists than serious music aficionados (who would expect to hear the full works performed). 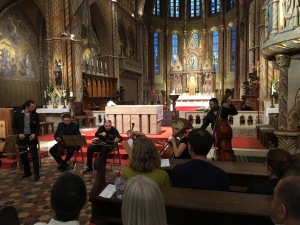 Tourists that we are, for us it was a wonderful experience.

The musicians had a high level of skill and training and an easy rapport.  They seemed happy to be performing, and their audience was attentive and appreciative.  The musical selections were all delightful to our ears.

Matthias Church, with its ornate interior and excellent acoustics, was the perfect setting for such a concert.

Our travel-weary souls were touched by the beautiful music.  It was a night to remember. 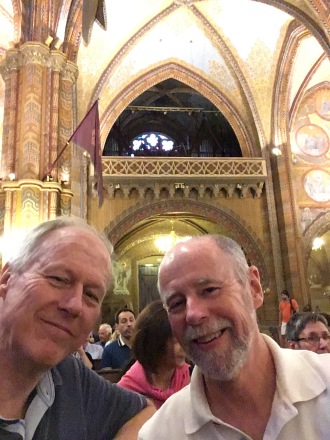 If our souls got sweet refreshment at the Matthias Church on that final night in Budapest, our bodies had a nice cleansing just beforehand.  We visited a 400-year-old Turkish bathhouse a mile or so down the river.

It was men-only night at the bathhouse, so there was only a modicum of modesty.  Everyone was issued a light Turkish cotton apron that tied around the waist.

The bathhouse is fed by an underground hot spring.  The heated, mineral-rich water, which emits a slight odor of sulfur, relieves sore muscles.  Immersion somehow induces the release of endorphins, triggering a sense of calm elation in the bathers.

After an hour or more sloshing dreamily around the pools and relaxing in the steam rooms, we were issued cotton sheets and shown to a warm room with comfortable chaise lounges.  This was the recovery room.  Conversations and cell phone use were not permitted.

We lay in peaceful contentment for another half-hour before getting dressed to leave.

Although a remnant of Turkish rule, the bathhouse in Budapest did not offer the full Turkish hamam bathing experience.

This would have to wait for our next stop, after Budapest.

We were on our way to Istanbul! 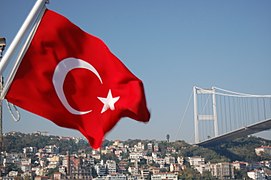