Liverpool is the westernmost of Europe’s major sea ports.  Millions of people have passed through Liverpool over the years, embarking by ship across the Atlantic Ocean, heading west for America.

Liverpool also has accommodated large influxes of immigrants as well, including desperate Irish refugees during the Great Famine of 1848-1853, and the Welsh from nearby Wales.

The newcomers also have included Chinese sailors who landed and then opted to stay, forming the largest Chinatown in the U.K. and perhaps in all of Europe.

Poor old Liverpool suffered relentless aerial bombing by Nazi Germany during the Second World War.  Almost the entire port area and most of the central city were leveled and had to be rebuilt after the war.

The ocean liner passenger transport industry, once so central to Liverpool’s identity, all but collapsed with the onset of commercial aviation.

Liverpool’s status as a major cargo port also suffered when the massive container ships were introduced, because the Mersey River estuary was too shallow to accommodate them.

You might think by now the life would have been wrung out of the place, but Liverpool still has a spark.

Its people are curious, inquisitive, friendly and engaging.

What remains of its Georgian housing stock from the 18th Century is beautiful and orderly, ever so distinctly British.

Today, Liverpool attracts the young.  There is a large student population enrolled in several universities.  Housing in Liverpool is relatively affordable. 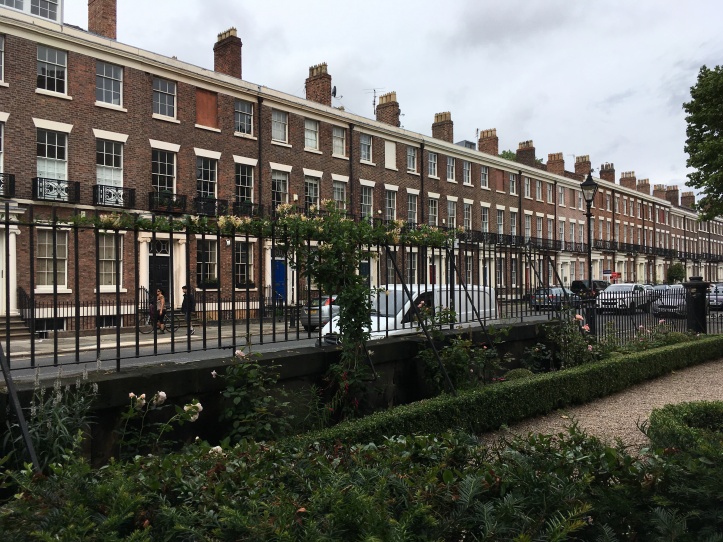 Not least among its virtues, Liverpool also has a pleasant climate, certainly during the summer when we visited.  An ocean breeze from the west continually refreshes the air.

If Liverpool were to be renamed, it might well be called “Buenos Aires” for its Good Air.

We drove to Liverpool from Conwy, Wales, a distance of only about two hours by car.

After spending a week or more in rural parts of England and Wales, we suddenly found ourselves in the center of a bustling large city.

We passed through a tunnel under the Mersey River.  The tunnel took us from bucolic-rural to busy-urban in one short step.

Abruptly, or so it seemed, we found ourselves in Liverpool City Center.

Okay, we thought.  We are certainly well rested after 10 days of country and small town life, so let’s get out on the town!

We found a walking tour scheduled to begin at 2:00 PM, only an hour after checking into our hotel, just down the street.

We grabbed a quick fish-n-chips lunch at a classically British pub near the central rail station, and then dashed across the street just in time to join the tour group.

There was a funny moment at the start of the tour.  We had a small group of only eight people.  We assembled in a square under a statue of Prince Albert.

Portia, our tour guide was an enthusiastic young recent university graduate who grew up in Nottingham and came to Liverpool for her education.

She was just getting started on her opening speech when she was interrupted an older man, who in hindsight probably “had a wee drop taken,” to use the Irish phrase.  (It means “intoxicated,” but sounds much nicer.)

The stranger wanted to explain some deep truth about the rock-and-roll music history of Liverpool, but he was not coherent.

Our poor young guide desperately needed to rid herself of him, lest he derail the entire tour.  Somehow we slid away and he did not pursue. 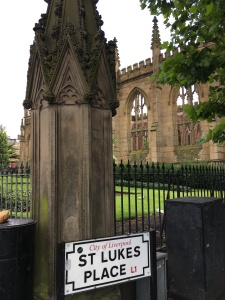 We were treated to a visit to the Bombed Out Church, which was destroyed by a Nazi bomb in 1941.

All that remains is the stone shell, remarkably intact after a fire that completely destroyed the interior.

“Ladies and Gentlemen, The Beatles!”

Our tour guide also took us to some of the old haunts of John Lennon and Paul McCartney in the early days of the Beatles.

It was interesting to learn that the two of them, John and Paul, methodically auditioned musicians in Liverpool to round out the band.

That was how its other two members – George Harrison and Ringo Starr — were recruited.  Lucky them!

From their modest origins in Liverpool, the Beatles launched themselves upon the world.

In the 1960s, when we were boys, the Beatles were a universal phenomenon, transcending national boundaries and language, race and age.  They were hugely popular across the whole globe.  They had enormous talent as composers and performers, and boundless ambition, and also the good fortune to find brilliant management and producers.  They soared to the top.

Even today, 50 years later, the music of the Beatles music still sounds deliciously sweet and familiar to our ears.

And yet, the Beatles came and went, and their influence was not quite so universal as we in our Western culture tend to assume.

This point was illustrated for us at dinner that night in Liverpool.

We found a great little Turkish restaurant in the city center.  Outside it was drizzling and cold.  We were wearing jackets and sweaters.  Inside, the restaurant was nice and toasty, warmed by a large wood-fired oven in back.

Just after we placed our food order, a nice, pleasant looking young man was seated at the table next to us.  He was Arabic, a schoolteacher from Kuwait.  He was spending the summer in Liverpool, studying English at one of the universities.

Partly from loneliness, no doubt, and partly for the opportunity to practice his English, he began talking with us.  It was awkward at first, but we all kept it up patiently, and with a little persistence we managed to sustain a pretty good conversation.

Just before our food was served, Frank pointed out a big, framed black-and-white photograph of the Beatles hanging on the wall, taken at the height of their popularity in the mid-1960s.

Frank explained to our Kuwaiti friend that his son, John, born in early 1981 — shortly after John Lennon was murdered in New York City — had been named for John Lennon.

The young Arab looked at the photograph, and then back at us, two or three times, with complete puzzlement.

He had absolutely no idea who the Beatles were, much less John Lennon.

For all the fuss about the Beatles, in the end it really was just pop music.

The next morning we left Liverpool, heading toward the north of England.

We had extra time, so we made a detour to the seaside city of Blackpool, about 50 miles up the coast from Liverpool on the Irish Sea.

Blackpool reached its zenith as a destination resort back in the reign of Queen Victoria.  It stretches for miles up and down the seacoast, with an endless assortment of promenades, cabarets, arcades, amusement rides and casinos. 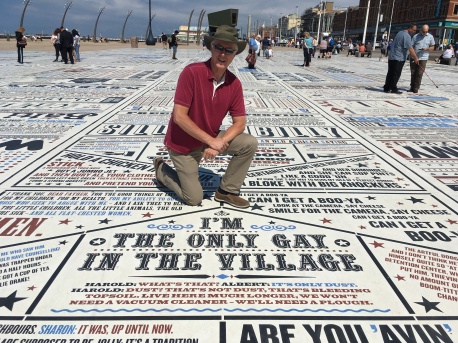 In one section, the entire boardwalk was plastered with quotes from old-time comedians who had performed in the local resorts.  We enjoyed the way language and words change meaning over time.

The weather was perfect on the day of our visit, sunny and pleasant.

Blackpool on a summer day was reminiscent of Atlantic City — another seaside jewel, a few decades past its prime, but still clinging to life.

Below is a photo of Frank at the end of a pier in Blackpool, the Irish Sea behind him.

This was the closest we would get to Ireland this year.

Next stop on our UK road trip – the Lake District.