“In Assisi, you expect St. Francis to walk around the corner at any moment.”

We drove to Assisi from Florence not quite knowing what to expect.

Assisi had been strongly recommended by Frank’s Uncle Danny, who spent six years in a seminary in Rome in the 1950s, studying to become a priest.

Danny told us Assisi was a perfectly preserved medieval village from the Thirteenth Century.

He was right.  Assisi is unique.  All of the buildings date back to the time of St Francis in the early 1200’s.  (Some are even older, dating from the Romans.)

As we strolled the streets, we felt like we were transported back.

In contrast to most European cities, in Assisi there is no modern city surrounding a historical city center.  In Assisi, everything is antique. 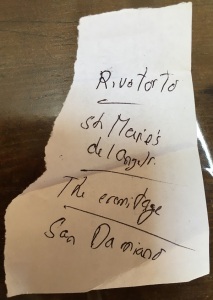 At dinner on our first night, we began chatting with a couple from Norway seated at the next table who were just finishing their week in Assisi.

We asked them what sites they would recommend and the husband, a professor, did not hesitate.  He had definite and enthusiastic opinions.

He jotted down his recommendations on a scrap of paper, which we saved.  He advised that these were special, spiritual places, away from the throngs of tourists.

The professor’s note provided a wonderful theme for our five days in Assisi – to follow in the footsteps of Saint Francis. 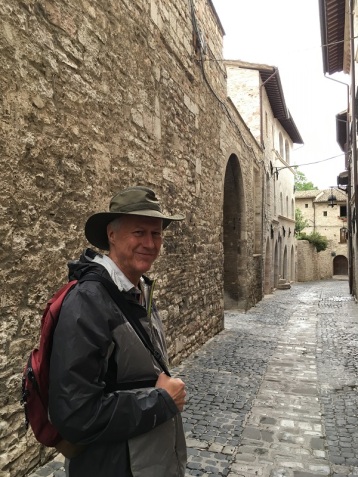 Our first target on the list was the hermitage where St Francis came to pray throughout his life.  It was about a four-mile walk uphill from Assisi through the woods.  Much of the trail is actually an old Roman road.  The walk was tranquil and uncrowded.  Knowing that the trail was over 2,000 years old was a great way to get settled into our new-found pilgrimage. 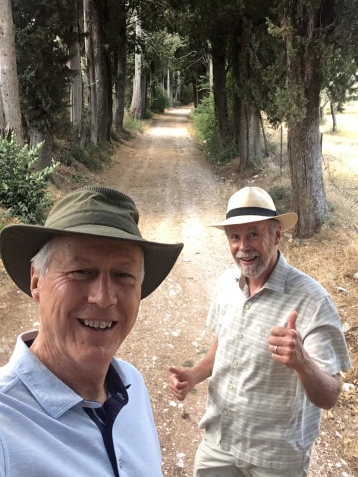 Arriving at the hermitage, we discovered an incredibly quiet and tranquil estate featuring medieval stone buildings, wooded paths and a few outdoor chapels.

The name of the hermitage, Eremo delle Carceri, means “Hermitage of the Caves.” In the time of Francis, there was only one structure on the site, and a number of caves in the hillside where Francis and other friars would live.  We visited the very cave used by St Francis, now enclosed within a building.

It was at this hermitage, during an early period of self-doubt, that Francis is said to have gained clarity about his mission to spread God’s word.  He then began to preach to a flock of birds sitting in a tree.  The birds apparently sat quietly and listened until he finished and gave them permission to leave.  This early event is the reason St Francis is often depicted with birds and other animals.

Walking the beautiful trails in this hermitage, it was easy to understand how he developed a connection with nature.  And, the tree where the birds sat is still there.

What a beautiful and spiritual retreat center, combining devotional prayer with the beauty of nature.  Our blood pressure dropped just being on the site.  We have visited lots of beautiful churches on our travels, but there was something entirely different about this sacred place in the outdoors.

Our next destination was a 20-minute walk from our apartment in central Assisi,

through olive orchards, to the church and convent called San Damiano.  This is where Francis received his spiritual calling in 1205, while still in his mid-twenties.

It is said that while praying in the church, Jesus spoke to Francis from the wooden cross hanging above the altar, telling Francis, “Repair my church.”  At first Francis took it as an instruction to physically repair that single church.  Later he understood it as a larger calling, to refocus the mission of the institutional church.

We had the opportunity to sit in the same small chapel where he had his vision.  Later in the week, we saw the original painted wooden cross which been relocated to a larger church in Assisi.  In this chapel a replica (now several hundred years old itself) hangs above the altar.

The chapel is part of a larger monastery, but to sit in those pews is truly moving.  Even putting one’s spiritual beliefs aside, just from a pure historical perspective, it is astounding that this location and so many others within Assisi are still available and almost entirely undisturbed.

For the next stop, we took our car for a short drive out to Rivotorto.  When Francis began 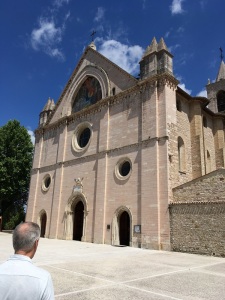 to attract disciples, he needed a location.

The local bishop gave him a broken down small stone structure with dirt floors where he and his initial three followers could live and worship.  Our destination was to visit that humble chapel.

When we arrived in Rivotorto, we were a bit confused.  Instead of a little chapel, we found a very large church.  When we went inside to try to ascertain the location of the chapel, we discovered that the large church had been built around it!

Given the simple construction of the original stone church, it could not have lasted intact for 800 years.  We are not sure if it was rebuilt anew, or simply repaired.  Either way, it is touching, both the simplicity of the dirt floor stone structure and the care with which it has been given. 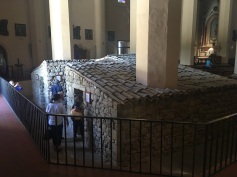 We were settling into our pilgrimage.

On our third day in Assisi we signed up for a two-hour walking tour of the historical center.

When visiting a new city, it is typical for us to seek out a walking tour.  It helps to add context and to discover sites we may want to explore more carefully during the remainder of our stay.

We were surprised when the tour led us to a nondescript door and we discovered that behind it was Francis’s birthplace.  His family was affluent and had a large house across the street.  But this little storeroom used for the family textile business was warmer in winter so his mother decided to give birth there.

Francis’s father was in France on business when he was born.  While he was away, the mother had the baby baptized as “Giovanni.”  When the father, a true Francophile, returned he decided to nickname the baby Francis in honor of his favorite country, France.

In subsequent years the storeroom where Francis was born was converted to a chapel.

We were also able to visit the family home across the street, now preserved as a museum.

When Francis returned from his short time in the military, traumatized by war and a period of captivity, and announced that he was going to pursue a life of poverty and spirituality, his father was furious.  He wanted Francis to work in the family business.

His father even locked Francis in a cell below the staircase in the family home to prevent him from following his monastic goals.

Poor Francis went from being a prisoner of war to being imprisoned in his father’s own house.  While touring the family home, we saw the actual cell, still perfectly preserved, 800 years later.

Reminiscent of Harry Potter’s fictional childhood room beneath the staircase, this barren existence would later be voluntarily repeated by Francis at the hermitage.

Once again, we were to find a church within a church.  The Porziuncola is the most

sacred site for followers of St Francis.  This small chapel was his main church when he was in his prime.  It has obviously been embellished with beautiful paintings after the large cathedral was built around it, but inside it is simple and feels authentic.

The grounds around the chapel used to be filled with small huts used by his followers.  Those structures were all removed, except for the nearby hut where Francis died.

Frank was raised Roman Catholic, and is well versed in the life of St. Francis.  In fact, Francis is Frank’s patron saint.  But before coming to Assisi, I (Brian) had little real knowledge about St. Francis other than the statues of him that people kept in their gardens.  I had not even considered that the city of San Francisco was named for him, nor that all the California missions were founded by Franciscan monks.

But to be in Assisi is to connect with this humble and devout man in a unique way.  To visit the significant places in his life and to learn the history of his evolution from lost soul to spiritual leader.  His influence was immense in his day and is still felt today.

Assisi is a rare experience.  A chance to feel the presence of St Francis as we walked his same streets.  It was an opportunity to carve out time on this vagabond journey for our own spiritual reflection.