The Good Life in Querétaro 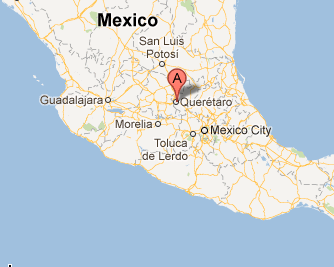 (See the link above for the Spanish pronounciation…it took us about a week to get it down.)

Its old stone streets are clean and safe, and the flat terrain makes them very accommodating for walkers.  There are churches everywhere, and the ringing of church bells is ubiquitous.  The antique buildings are beautifully preserved and maintained.

Locals and tourists mingle comfortably in this charming old city.

Unlike nearby San Miguel de Allende, another UNESCO site, Querétaro has very few U.S. tourists or ex-pat residents.  Practically no one in Querétaro speaks English.  Virtually all of the tourists we encountered seemed to be from elsewhere in Mexico.

Life for us in Querétaro was very much like being on a cruise ship.

In fact, we met our Querétaro hosts, Ned and Susie, on our February cruise from Honolulu to Auckland.  We became instant friends.

When Ned and Susie invited us to visit them at their home in Querétaro we found ourselves on yet another new leg of our vagabond adventure, deep in the heart of old Mexico.

Ned was born and raised in Mexico City.  He is thoroughly Mexican, completely fluent both linguistically and culturally.  But he looks and sounds (when he speaks English) just like a U.S. American, and indeed he is descended from U.S. citizens who settled in Mexico a generation or two ago.

Susie is from the Washington, D.C., area, and moved to Mexico City early in her adult life and raised her children there.  She owned a high-end retail home furnishings and decorating business in Mexico City and designed many of her own products, right down to the fabrics for upholstery and drapes.  She has a tremendous sense of style.

Since moving from Mexico City to Querétaro a decade or so ago, Ned and Susie make a business of buying and modernizing homes in the historic section of Querétaro.  They take old dilapidated structures, often abandoned for years, and with their construction crew turn them into absolute showplaces, both preserving and updating them.

Their own house, built in the 18th Century, was the first such project, and the results are outstanding.  Their home is a masterpiece of design.  We had the very good fortune of staying there for a week as pampered guests.  Filled with many of Susie’s favorite items from her former decorating business — all sorts of beautiful collectibles — their home achieves the rare distinction of being both palatial and homey at the same time.

Ned and Susie’s house, like most of the homes in Querétaro’s historic district, is deceptively modest from the street.  The house fronts directly onto a narrow sidewalk.  The entrance is an old, seemingly nondescript wooden doorway framed by an opening large enough to allow a horse-drawn carriage to enter.

Ah, but open that old wooden door from the outside, and pass through the foyer to the grand central courtyard.  Surrounding the courtyard is a balcony stretching the full length upstairs, and rooms built out to the edges of the property.  This central courtyard offered security, privacy and plenty of air for the rooms.

The upstairs features an open balcony and walkway around the courtyard.   There is a cozy family room on that level where Ned and Susie spent most of their time.  We all gathered there every morning to begin our day.

Leaning over the balcony, Ned and Susie would call down in Spanish to the domestic helpers in the kitchen area on the lower level, for whatever they (or we) required. 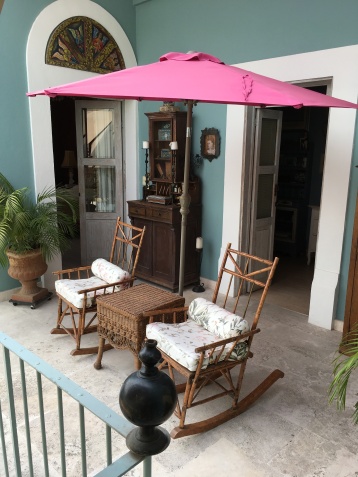 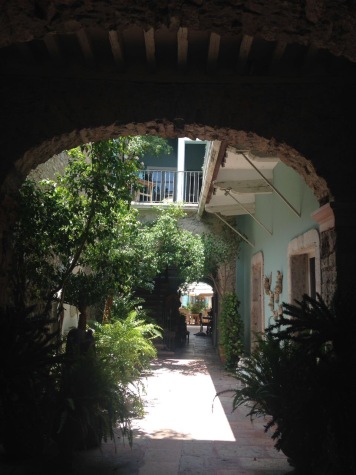 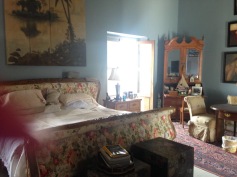 The relationship we observed between the proprietors and domestic help was gracious and genuinely warm.

Juanita, the cook and general supervisor, has worked for Susie and her family for decades.   Her husband, Consuelo, is construction manager for the house renovations Ned and Susie undertook.  They live comfortably, along with Juanita’s 20-year-old son Ricardo (a law student), in a large separate apartment at the rear of the house, above the kitchen.

Assisting Juanita during our stay was a young family man named Jesus, who is known by the nickname Chuy (pronounced “Chewy”).  He lives in Querétaro with his wife and children, but stayed in the household during our visit with Ned and Susie.  Chuy was funny.  He spoke and understood English quite well, but pretended not to.

When guests are over, Juanita and her crew put in extra hours, so they are basically available anytime Ned or Susie would call out Juanita or Chuy’s name.  Juanita would prepare amazing meals and Chewy would be ready with coffee or drinks at anytime.  It was a very easy lifestyle.  And Ned and Susie were loved by their staff.  Great and generous employers.

The experience of live-in servants was new to us, but in this household it was carried off with genuine affection and mutual respect.

Also joining us as guests of Ned and Susie were Ron and Jeannie, another couple we met on the cruise to New Zealand in February.  On the ship, the six of us ate dinners together and we went on a number of excursions as a group.

At the end of our South Seas cruise, when Ned and Susie suggested that we all join them in their home in Querétaro for a week in May, we all immediately agreed to the plan.

Awaken late morning and stumble out, one by one, to the upstairs sitting area.  From the kitchen downstairs, on request Chuy would bring a bowl of delicious fresh fruit and yogurt, coffee and pastries.

After breakfast, Mark the yoga teacher — a cute and intelligent young Irish-American guy originally from Baltimore, who lives with his Mexican husband in Querétaro — would arrive around 10:30 for the hour-long class.

Susie in particular has a remarkable knack for gathering really nice, interesting people in her life.  Mark is one such person.

Every couple of days, a masseuse would show up around noon to provide the most amazing hour-long massages to anyone who wanted them.  She had medical training but had been forced by family circumstances to give the prospect of a career in medicine.  She was the most gifted and intuitive massage therapist we have ever encountered.

Lunch was served somewhere around 2 or so in the afternoon and dinner was often late, typically after 9:00 PM, and sometimes as late as midnight.  All of Juanita’s meals were outstanding.  As Susie said, Juanita spoiled us — never again will we find Mexican food anywhere as good as the meals Juanita prepared.

Aboard the cruise ship, Susie taught us a competitive, high-speed card game called Popeye, which we have described in a prior blog post.  We continued the tradition during our visit to Querétaro, playing daily in the library next to the upstairs sitting room.  It would be difficult to describe the glee with which we play this silly game.

In between these domestic gatherings, we were free to amble around the surrounding historic district at our leisure to look around.  One day Ned and Suzie took us on a tour of two of the houses they are rebuilding and restoring in the Centro Historico.

We discovered that it was from here — at a church in Querétaro — that Fray Junipero Serra embarked for his historic mission-building expedition in California. 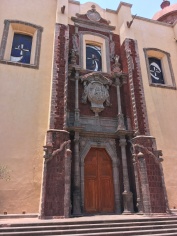 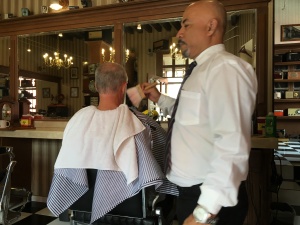 Another day the two of us went out for haircuts at a local barbershop Ned recommended.

As a large group, the six of us (Ned & Susie, Ron & Jeannie, Brian & Frank) made a couple of excursions by van to several nearby destinations.

One of these was the Peña de Bernal, one of the tallest monoliths in the world, in the quaint small town of San Sebastián de Bernal. 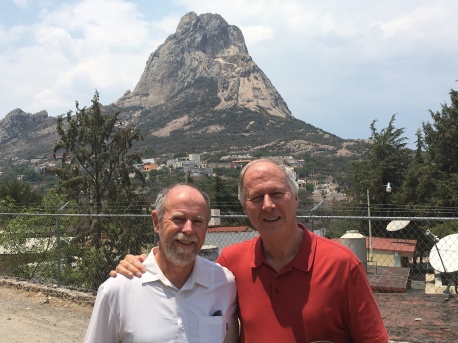 Another day, we visited San Miguel de Allende, long a haven for ex-pat Americans.  San Miguel is a popular choice for Yankee retirees who seek a low-cost and charming Mexican town where English is widely spoken.

It was in San Miguel where we noticed that Susie never passed a beggar without pausing to say a few kind words and make a small gift.  She did this without any sort of fanfare.  That’s the kind of person Susie is, truly a rare gem.

This was actually our second visit to San Miguel.  We had stayed there several years ago with a group of friends.  It felt great to be back, it is such a beautiful place!

Aren’t we fortunate, to have made such wonderful new friends, all the way down in the far reaches of the South Pacific, and then join them again for a happy reunion, on a distant continent, a few months later?