Sydney — A City So Nice, We Visited Twice

Sydney, Australia, is a major port city, located on a large, naturally sheltered harbor in a magnificent, hilly setting on a beautiful bay.

Sydney is like a big sister to Auckland, every bit as lovely, but bigger, more fully developed, worldly, and self-assured.

We enjoyed two closely-timed visits to Sydney, the first in late March for a two nights, and then a few days later, starting on Saturday April 1 until the following Wednesday.

In between, we spent four days with Frank’s Aussie cousin Toni and her husband Nevin at their beachfront home, an hour or so up the coast in North Avoca.

It was late summer, a beautiful time in the Land Down Under.

After Sydney, we flew home to the United States, marking the end of our long, pleasant sojourn in the lands of Oceania.

Our first apartment in Sydney was in Pott’s Point, a residential neighborhood of apartment buildings on a hill above the harbor.

Our host was a friendly, younger Malaysian guy named Gin, who had lived in Sydney for the past 10 years.

At the bottom of the hill on Potts Point sits a large Australian naval base, a bit of an oddity in the heart of a major city.

It did not escape our attention that there were hundreds of handsome Australian sailors living in barracks just down the road from us.

Immediately after meeting Gin, our host, and getting settled in the small apartment, we set out for a self-guided tour of the lands around Sydney harbor.

The first thing we discovered, right at the base of our hill, was Harry’s Café de Wheels, a famous vendor of street food.  Later someone told us Harry’s is just a tourist trap, but we loved it.  We were hungry for lunch and it suited us perfectly. 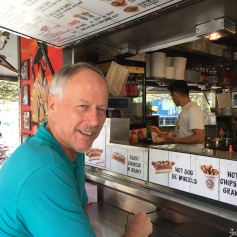 After lunch, we commenced our walk in earnest along the waterfront. 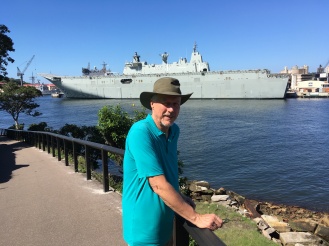 The naval base was restricted, of course, but just beyond it were the public docks.  From across a narrow channel we had a good view of the navy ships.

We came upon an Olympic-size swimming pool crowded with swimmers. 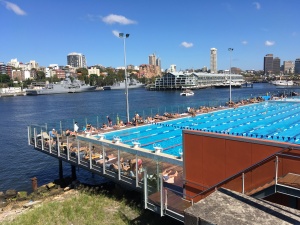 Then, farther along the waterfront, beyond the docks, was open parkland, forming a lush green belt along the water.  It stretched all the way over to the iconic Sydney Opera House about a mile away.

The weather was sunny and pleasant, and the views of Sydney harbor were beautiful.

Despite the throngs of tourists, somehow it felt relaxed and uncrowded.  There seemed to be ample space for everyone, and there were certainly ample views in every direction.

All of the visitors — people from everywhere in the world — seemed uniformly happy to be in such a glorious setting. 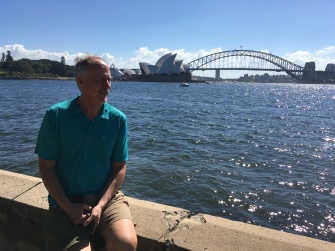 Our spontaneous, self-guided Sunday walking tour of the Sydney waterfront was unforgettable.  What a favorable first impression we got of Sydney!

A Glimpse of Gay Heaven at the Beresford Hotel

Gin, our Potts Point landlord, and a gay lad himself, recommended we stop by a bar called Beresford Hotel for their Sunday afternoon gay garden party.  He said he would look for us there.

We went to the Beresford, and it was quite a scene.  The back garden was a huge, open air space under trees.  The place was teeming with gay men of every description.

Animated male voices made such a cacophony of sound that we could barely hear the music.  Nor, with their mostly Australian accents, could we understand much of what our fellow patrons were saying, nor join easily in the conversations.

Despite these limitations, it gave us a joyful feeling to be in their presence of such a large crowd of handsome, well-dressed, and self-affirming gay men.

Oh, yes, says we to ourselves, Sydney’s the place! 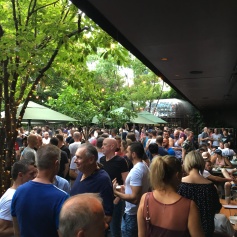 We never did find our friend Gin in the crowd.  But we did make some other friends, close than Gin to our age bracket, including a nice Kiwi guy from Christchurch.  Like us, he had been married and had children before coming to terms with being gay.

Our Kiwi friend joined us for an impromptu dinner afterward at Mr. Crackles, a lunch-counter-type restaurant on nearby Oxford Street, where they served sandwiches made of delicious, fresh-roasted-and-sliced-on-the-spot pork.  Yum!

Oxford Street, which is the heart of Sydney’s gay community, famous for its gay bars and gay-friendly businesses.

Oxford Street, by the way, is the venue for Sydney’s annual Gay Pride Parade, much like Market Street in San Francisco.

Sydney Harbor has a fine, deep outlet to the open ocean, the Tasman Sea, to the East.

As this map shows, it is truly an ideal setting for a seaport.

The gap separating Sydney Harbor from the Tasman Sea is not unlike San Francisco’s Golden Gate, except that it is far too wide to span with a bridge.

On Monday, the day after our arrival in Sydney, we participated in a large walking tour of about 70 people through the Central Business District and historic sites.  It culminated with a photo opportunity on the waterfront with a view of the Opera House. 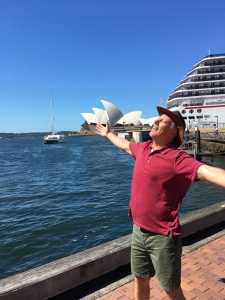 A few minutes later, as we walked, just the two of us, past the Circular Quay Ferry Terminal, we saw there was a ferry departing in 3 minutes for a town called Manley, which is located on the north side of the mouth of the harbor.

Without hesitating, we strode quickly aboard the ferry just before it embarked.

The ferry took us for a scenic ride along Sydney Harbor for quite some distance and then passed by the mouth of the harbor in the picture above.  A few minutes later the boat docked at Manley and we disembarked.

Manley was a delightful, self-contained little tourist town in its own right.  There is a commercial promenade leading across from the ferry terminal to the beach.  We stopped along the way for a quick lunch and then arrived at a most beautiful, crescent-shaped beach, full of happy vacationers, swimmers and paddle boarders.

From the beach in Manley, we discovered a hiking trail along the coast.  It traversed an old military base built to protect the entrance to Sydney Harbor from the Tasman Sea.

We followed the trail and eventually completed a loop that brought us back to the ferry terminal in Manley.

This was the first of three coastal walks we enjoyed in the Sydney region. 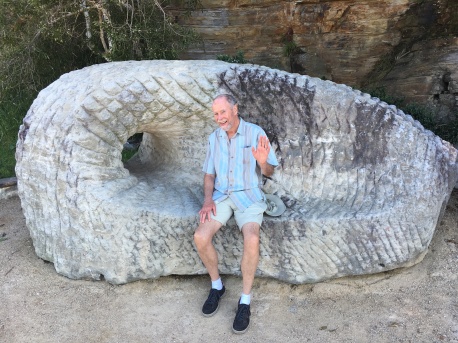 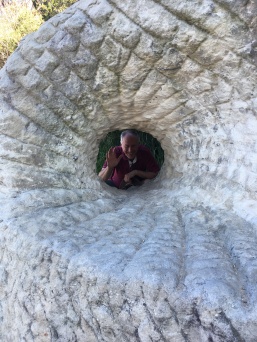 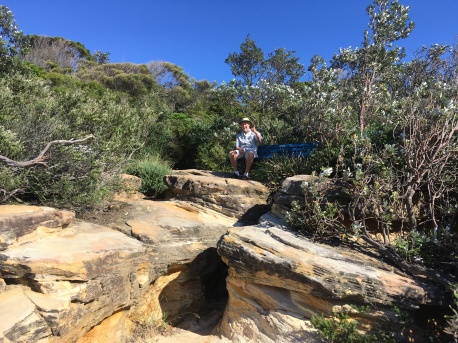 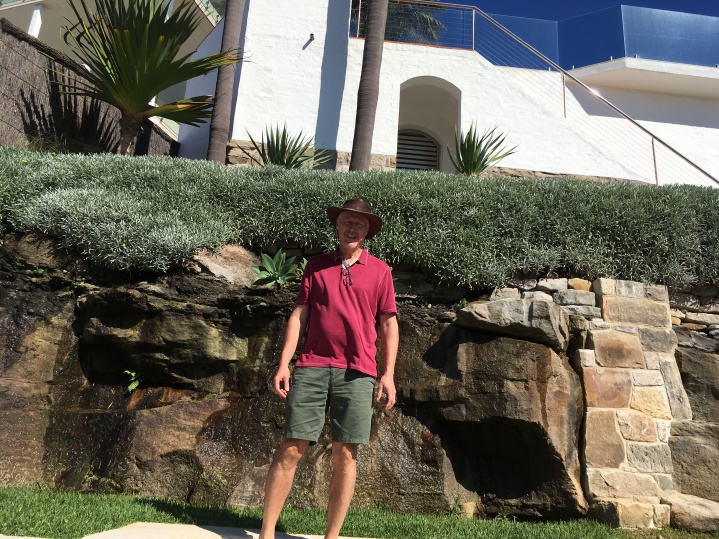 Our second coast walk in Sydney came thanks to a nice couple named Ray and Iwan, who live near Sydney.  They are friends of our friend Doug back home in Marin County, California.  Ray and Doug worked together 30+ years ago.

Ray and Iwan were very generous with their time and took us on a tour of their favorite sights in Sydney.  One of the first places they took us was the Gap, a park on the cliffs looking out over the ocean.  It is one of Sydney’s most dramatic and beautiful spots. 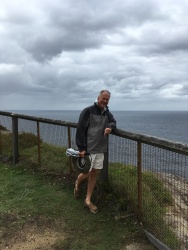 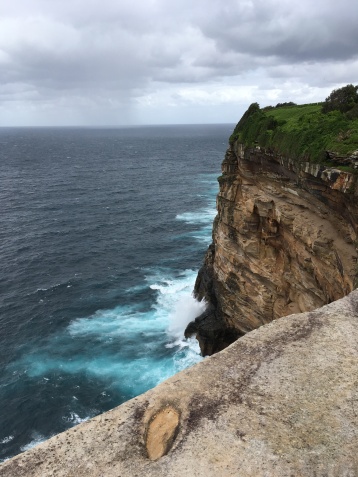 The third of our coast walks in Sydney — the longest and probably our favorite — was from Bondi Beach to Coogee Beach.  The weather that day was off-and–on sunshine and rain, which we really enjoyed.  We had our rain parkas for protection, and the rain kept the crowds away.  We enjoyed one amazing vista after another.

We passed by a dramatic old cemetery above the sea, several man-made concrete swimming pools built into the surf, and an elegant old lawn bowling club. 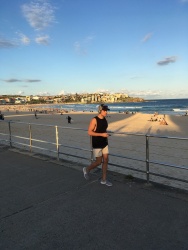 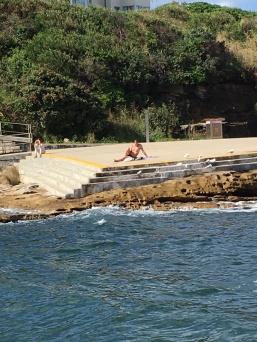 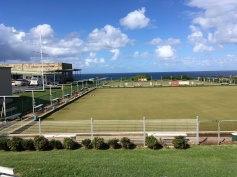 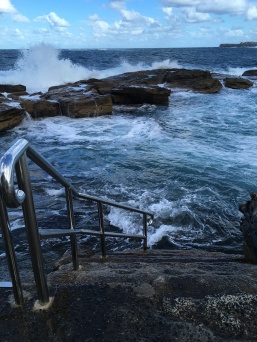 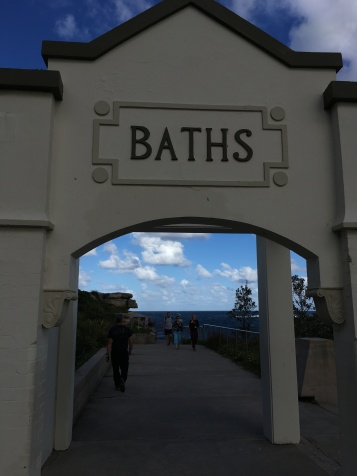 In between our two stays in Sydney we visited Frank’s Aussie cousin, Toni, and her husband Nevin, at their beautiful ocean-front home in North Avoca.  Their house sits up on a hill on the north end of the crescent-shaped beach, looking south, with a sweeping vista of the entire beach.  Just below their house, on the north end of the beach, is an extraordinary rock outcropping, extending out into the surf.

It was a relaxed and happy time there with Toni and Nevin and we especially appreciated their warm hospitality after our extensive travels.

Mind you, dear reader, we have been enjoying this lifestyle of continuous travel.  Still, it felt great to settle in at home there with Toni and Nevin for a few days.  We really love their company! 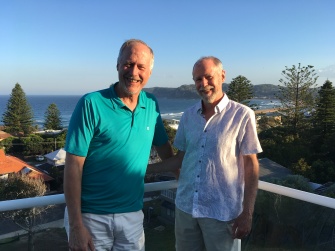 We were obliged to complete a small errand while visiting Toni.  We did this as a favor to yet another Weber cousin, Phyllis, who lives near us in California (and with whom we have been staying during visits home lately).

It happened that Cousin Phyllis owed a cash payment to the proprietress of a dress shop, for a purchase she made when visiting Toni and Nevin last Christmas.  (That was the occasion, by the way, when Toni and Nevin were married, there at their home.)

We conveyed Phyllis’s payment quite happily.  It was smiles all around.  Errand accomplished!

At the end of our stay with Toni and Nevin, they drove us back into Sydney.  There we all joined Cousin Nik (Toni’s son), Nik’s lovely wife Dee, and their darling baby boy Mo, for dinner at a very nice, noisy seafood restaurant at Bondi Beach.

It was such a happy occasion, this reunion of two branches of the family, the Australian and the American!

On the first afternoon of our second visit to Sydney, we attended a performance of the Bell Shakespeare Company’s “Richard III” at the Sydney Opera House.

It would have been a special treat, of course, to see pretty much any performance at such a beautiful and world-renowned venue. 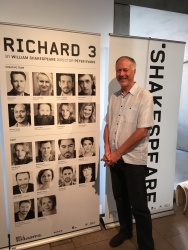 But the production of Richard III that we got to see was especially good, featuring a remarkably gifted actress named Kate Mulvany in the lead role as Richard. 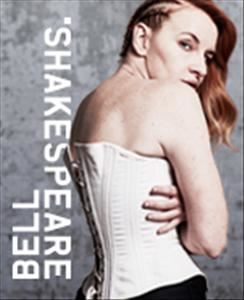 Mulvany also served as “dramaturge,” reworking the script a bit here and there.

In particular, she altered the ending, eliminating the self-congratulatory, moralistic speech by the Earl of Richmond, who defeated and killed Richard in battle.

Instead, the play ended with Richard, all by himself, on the stage.  As he died, mortally wounded by Richmond, Richard cried out, “I am alone!”

In that moment, Richard, the corrupt, murderous, horribly ruthless schemer, suddenly became more pathetic than evil.  We were reminded that he had been physically deformed from birth and ridiculed and isolated throughout his life.

Oh, it was a powerful ending!  The emotional impact lingered for days.

There’s more we could say about Sydney.

We could describe, for example, our tour of the old “barracks” that were built to house the early convicts (many of them political prisoners) who were exiled by the English to Australia.  The barracks later were used to house Irish girls who fled the Great Hunger of 1949-1850.  Their stories of loss and finding new lives in Australia were very affecting.

Or we might tell of the fantastic chrome statute of Captain Cooke.

Or we could describe our second apartment in a neighborhood called Darlinghurst, not far from Pott’s Point.

Or we could mention our visit with a lovely couple named John and Margaret out in the suburbs, where they hosted us for dinner one night.  John is the older brother of Paul, Frank’s good friend in San Francisco.  John prepared a delicious Middle Eastern feast.

Nor would we want to omit a description of the huge St. Patrick’s Roman Catholic Cathedral, a tribute to the great contributions of Irish immigrants to life in Sydney and elsewhere in Australia.

Yes, there were a great many delightful aspects of Sydney.

But we’ll just let the photographs below tell the story. 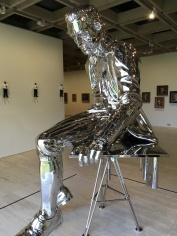 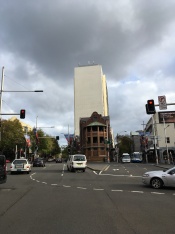 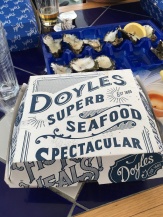 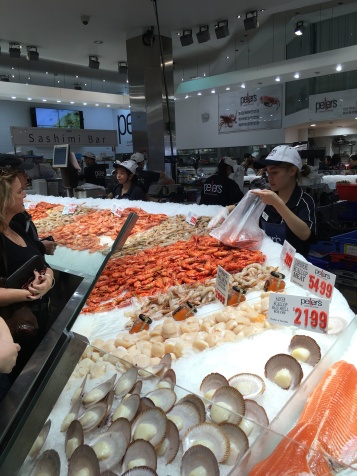 On Wednesday April 5, 2017, we caught a flight from Sydney to Los Angeles.

We were heading back to the USA for a brief visit, before the next leg of our world tour! 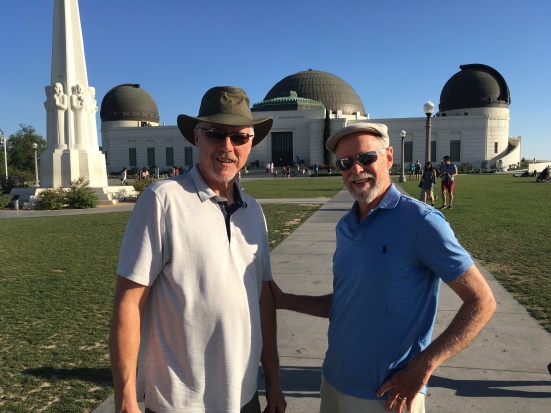