We spent a week in Berlin in late September.  The weather during that time, just on the heels of the equinox, was gorgeous.  Here we were, in the upper reaches of the Northern Hemisphere, just at the change of season from summer to autumn.  The angle of the sun was sharp and crisp.  Ambient temperatures in the sunny afternoons were warm enough to be comfortable without a jacket or a sweater.

For whatever reason — and the mild weather no doubt was a factor — our impressions of Berlin did not match our expectations of Berlin.

Instead of the dense, congested, grimy city we had envisioned, the Berlin we discovered is open, light and clean.  The streets are wide and pleasant, and the buildings are mostly low-rise and evenly distributed throughout the city.

It is the most pleasant of national capitals, modern, vibrant and accommodating.

And how would we describe the people we met in Berlin?  The attributes we remember would be polite, reserved, punctual and a little dour when they first meet a stranger.

A case in point was the man who owned and ran the bicycle business where we rented bikes on our second day.  When we entered his shop, deep in old East Berlin, he steadfastly maintained his gaze on some part he was  repairing.  He seemed intent on not extending any sort of greeting to us.  We accepted this quietly, and began looking around at the bicycles.  The key, it seemed, was to not take it personally.  Eventually he warmed up and engaged in an animated conversation, telling us he had been running this shop since the early 1970s, during the Communist era, a half mile east of the dreaded wall.  Although about 70 years of age, our proprietor disclosed he had a girlfriend who had been to San Francisco and really liked it.  He was crusty on the outside but soft and moist as sweet butter on the inside, like a pastry.  He was all smiles when we left on our bicycles.

In Berlin, we rented a spacious one-room apartment, three stories up.  Our unit faced south and had large, tall windows and a small deck, with a view of an enclosed courtyard below.  It was a quiet, airy, German den of romantic affection.

The location of our apartment was several blocks inside what formerly was Communist East Berlin.

Just a few blocks to the west of us was the Spree River, which winds through the city and divides east from west.

The weather in late summer was mild, and the overall impression we got was that Berlin is an exceptionally beautiful and livable city.

Reminders Of The War

A block-and-a-half away from our apartment, in the opposite direction from the river, was a massive building made of solid, steel-reinforced concrete that the Nazis erected during World War II as a bomb shelter for civilians.

We were puzzled by this structure at first, until we learned of its purpose — the protection of civilians against aerial bombing by the Allies.

Germany during the war was a nightmare.  We all know it.  But a visit to Berlin impresses upon the visitor the fact that the horrible events of the war were quite real and not all that long ago. 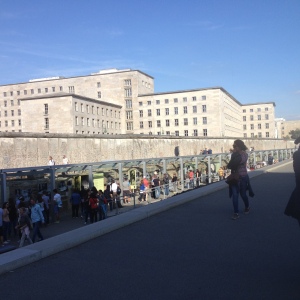 The “Topography of Terror” is a museum located on the premises of the former SS headquarters in central Berlin (the building itself was destroyed during the war and not rebuilt).

We toured the museum after first wandering quietly through the nearby Holocaust Memorial.

It is an evocative installation reminiscent of a crowded cemetery.

The effect of the latter is a distinct, raw feeling of grief, while the former conveys a sense of the culpability of German people and institutions (including big corporations that still survive) in the massive crimes of the Nazi regime.

It is haunting to realize that Hitler ascended to the post of Chancellor in 1933 through a democratic electoral process.  He was only in his 40s at the time.

The photographs of Hitler’s public welcome in Berlin, and the enthusiastic faces in the crowds, show the extent to which ordinary Germans were complicit in allowing the Nazis to achieve power and pursue their crazed and malicious agenda.  The regime itself was composed of a hard core group of fanatics, but it took tens of thousands of Germans to carry out the murderous Nazi program (domestically, the mass killings of Jews, Gypsies, gays and the mentally retarded; abroad, the aggressive invasion of neighboring countries).  Culpability among German people was widespread. 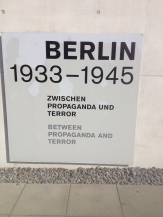 Richard, a close friend, was raised in New York in a Jewish family.  His father left Berlin in the 1930s and emigrated to America to attend medical school, leaving his widowed mother behind.  She was murdered by the Nazis early in the regime.  Unaware of her fate, Richard’s father persisted throughout the war in an effort to free her, sending money demanded by the Nazi government, to no effect.  Richard , like us, is a baby-boomer, born several years after the war ended.  His father cautioned him to avoid Germany.  “They are killers,” he warned, speaking of the German people.

The Germans we encountered were civilized and kind.  They did not seem like killers.  Many of them are church-goers.  How could this have happened?

Modern Germany deserves credit for its frank acknowledgement of this history at the Topography of Terror, the Holocaust memorial, and elsewhere in Berlin.

Both in Amsterdam and in Berlin, we came to a greater appreciation of the role of the United States and our Armed Forces in liberating Western Europe from the grip of the Nazis.  It is a source of lasting good will between Europe and the United States.  As Americans, we felt very welcome and comfortable in these cities.

A really outstanding feature of Berlin is the expansive Tiergarten park, which adjoins central Berlin, just outside the Brandenburg Gate.  It was less than a mile from our apartment, so on our first full day in Berlin we walked over, across the river, and attempted a self-guided walking tour through massive park.

The Tiergarten was pastoral and beautiful, all meadows, streams and woodlands, interspersed with statuary.

Once we realized how vast the park was, however, and saw the wide, accommodating paths, we opted to rent bicycles on the second day.

On bicycles, we were able to traverse much of the park.  It was quiet, pastoral and very scenic.

We could hardly believe we were in the heart of a major city. 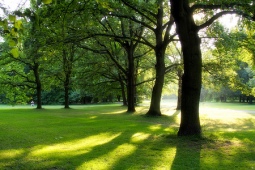 The Tiergarten was stripped clean of trees during the war, when people in Berlin were desperate for fuel.  The Allied bombing followed.  Earlier, when the Nazis were in their ascendancy, it is said Hitler used to enjoy strolling through the park.

The preservation of such a large, bucolic park in the very heart Berlin is quite a wonder.  We can be forgiven, therefore, for spending so much of our precious time in the Tiergarten during this — our first and rather abbreviated — visit to the great city of Berlin.

Bringing Down the Wall

We took a guided walking tour that began at the Brandenburg Gate and traced the path of the wall that formerly separated West Berlin from East Berlin.

The Berlin wall was not a single wall, but rather two parallel walls, with a “no man’s land” in between.  At intervals along the wall were guard towers where armed East German soldiers kept watch, with orders to shoot to kill anyone who scaled the first wall and tried to reach the second wall on the other side.

To further impede passage, not only was the no-man’s land sprinkled with land mines, it also was covered with a deep layer of soft sand across which it was all but impossible for a person to run.

The last stop on the walking tour was the beautiful Gendarmenmarkt Square (meticulously rebuilt after being destroyed during the war).

We sat outside, on the steps of the old church, and listened attentively as our tour guide spoke with great intensity and animation about the events of 1989.  The wall was breached at last, allowing throngs of people to cross freely back and forth, which paved the way for reunifying not only the City of Berlin but Germany itself.

The Russians had their reasons for insisting upon the division of Germany into two halves, and for keeping Berlin separated by an almost insurmountable barrier. They lost 20 million people during the war that Nazi Germany started.

But the wall was ugly and demonic, and its elimination was a happy event in the forward progression of humanity.

As first-time visitors, admittedly a bit starry-eyed, we came away convinced that the vibrancy of Berlin today, and the welcoming, enthusiastic mood among Berliners, can be attributed in some measure to bringing down that awful wall.

Stumbling Into The Mauerpark Flea Market

On Sunday, we took the train a mile or so to the east of our apartment, to see the famous “Fernsehturm,” a television broadcasting tower built by the Communist East German government in the 1960s.  It is the tallest structure in Germany, among the tallest in all of Europe, and a distinctive Berlin landmark. 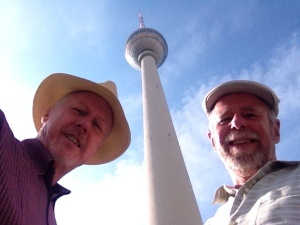 We enjoyed the people watching as we waited in line for the elevator and then in the viewing area at the top of the tower.

The vistas of Berlin from up there were outstanding, especially with the clear, sunny weather on the day of our visit.

The experience of looking down on Berlin from the Fernsehturm was like viewing a diorama.

In only about an hour’s time, we were able to take in the whole city and affix it to our memories.

From the Fernsehturm, we walked almost a mile to the Volkspark Friedrichshain, the oldest public park in Berlin, which we had spotted from atop the tower.

At the center of the park we climbed to the top of a large earthen mound, which we learned was the remains of yet another bomb shelter built by the Nazis during the war

All of this touristy wandering was really great, but truly the highlight of our Sunday happened after we caught a streetcar from the vicinity of the Volkspark, back toward our apartment.

At the third or fourth stop after boarding the streetcar, we noticed a massive flea market, with throngs of people flowing in and out of the main gate.

We made a split second decision, after a momentary consultation.  Off the streetcar we hopped, and joined the crowd walking through the gate.

Inside, we found the largest gathering of people we had seen in Berlin.  The mix was very diverse, although we saw virtually no other Americans.

Besides the normal flea market areas, they also had a huge gathering of people for a karaoke show in a natural amphitheater at the bottom of a hill.  Curiously, the karaoke was in English, even though all the participants and audience seemed to be German.

We enjoyed an early dinner and fresh German beer in the food area, before hopping back on the streetcar and heading home.

It was a glorious afternoon.

The experience of being in that mixed crowd of friendly, fun-loving people really sealed our love for modern Berlin and Berliners.

All too soon, it was time to bid “auf wiedersehen” to old Berlin. 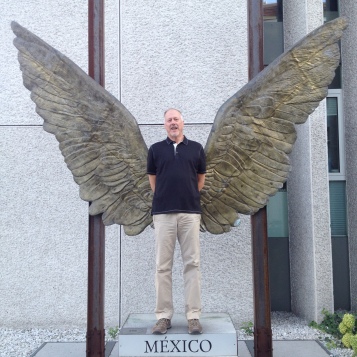 Although it may appear from the pictures above that we flew away from Berlin, in fact we left by train, en route to our next destination:  Prague.