The entryway to our apartment building was a case in point.

It was a new building, only about three years old, located in a charming neighborhood clustered around the eastern base of the famous Acropolis, between the Acropolis and Hadrian’s Arch.

The walkway leading up to the main door of our building was made of panels of thick, transparent glass.

Plainly visible through the glass, just under our feet, was a jumble of ancient, large building stones that were uncovered when the prior building on the site was demolished a few years ago.

It was a little unnerving at first, walking on the glass above the big stones.

We felt like we were going to fall through.

Below the building, in the parking garage, was a better preserved section of wall from the same period.

In the fifth or sixth century before Christ, our kindly landlord explained, a wide boulevard existed where our narrow street was now located.  It was lined with large monuments commemorating distinguished Greek playwrights and actors.

The great stones beneath us were remnants of that early period.

Several meters down the block, he told us, was a small park containing the only one of those monuments to survive into the modern era.

In that same small park, which was recessed a bit lower than the current level of the street, a few more of the old building stones were scattered on the ground.

This was our welcome to Athens!

The main thing to see and experience in Athens is the wealth of archeological material handed down to us by the ancient Athenians.  They were a brilliant people.  Our entire culture and way of thinking harken back to the Greeks.

It is truly rewarding to see with your own eyes what remains of the great civilization they created in Athens.  We felt a definite emotional response being there.

The Romans also left their mark on Athens.  They occupied Athens for centuries, at the height of the Roman Empire.

Happily, the Romans celebrated and respected Greek culture.  They preserved the key archeological sites left by the earlier Athenians.  They also built some remarkable structures of their own.

Alas, the subsequent centuries were not kind to Athens.

Notwithstanding all of that, in modern day Athens there is still a great deal to see and explore from its distant past.

We did our best in the course of three full days.

Surely the height of any visit to Athens, both literally and figuratively, is the Acropolis.

The Acropolis in Athens is a table landform, what we would call a butte.

Not unlike the Temple Mount in Jerusalem or Masada in southern Israel near the Dead Sea, the Acropolis is a natural plateau thrust boldly up from the earth, with sweeping views of the surrounding region.

As land masses go, the Acropolis is especially impressive because it rises up virtually from sea level, just a short distance from the Aegean Sea and Athens harbor.

Its peculiar geology destined the Acropolis for prominence, as it afforded an ideal platform for guarding the coastal city of Athens.

Beginning in very ancient times, as long ago as 4,000 BC, the Acropolis was improved for military purposes by construction of a massive wall, which shored up its foundations and served both to protect and to help flatten the plateau on top.

In a short span of only about 30 years, between 460 BC and 430 BC, most of the structures we now see on the Acropolis, including the iconic Parthenon, were constructed.  They are an engineering as well as an artistic marvel, especially considering their antiquity.

Modern Greece has bequeathed to the world a great gift in the form of a spectacular museum on the southern flank of the Acropolis, in which hundreds of precious artifacts are displayed.

A massive bank of windows allows visitors to gaze up at the Acropolis.

The thing to do is to visit the museum first, and then hike up the hill and tour the Acropolis itself.  That’s what we did on a sunny, warm day.  It was a really wonderful experience. 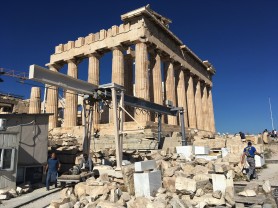 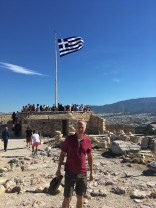 Brian atop Acropolis with Greek flag

Brian with Pano from atop Acropolis

View of our neighborhood from Acropolis

After touring the Acropolis, we headed down its northern flank to visit the “Agora,” or central square, of ancient Athens.

Little remains of the Agora, which in its day was the political and commercial center of Athens.

According to legend, it was the birthplace of democracy.

The ruins of the Agora were largely built over and have been excavated only in recent times.

There is an outstanding museum in the Agora.  It is housed in a reconstructed academic building from ancient Athens called the Stoa of Attalos.  The building itself  is elegant, with beautiful proportions, and contains many precious artifacts from the Agora.

Brian at the Stoa of Attalos

Frank at the Stoa of Attalos

Frank selfie close up at Doric column in Stoa of Attalos

One antique structure in the Agora that has survived almost intact is the Temple of Hephaestus.  Dating from about 450 BC, it sits serenely on top of a small hill.

Besides these treasures from ancient the Athenians, there are also ruins of outstanding Roman structures scattered around central Athens.  We visited several of them.

It is a peculiarity of Athens that, to a visitor who has seen and begun to appreciate the ancient Athenian structures and sculptures from roughly 500 BC, the Roman ruins can seem merely derivative.  Still, they are impressive in their own right. 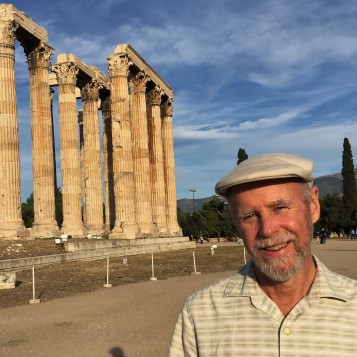 Frank at Temple of Zeus 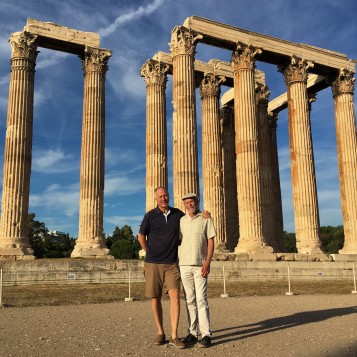 Brian & Frank at Temple of Zeus

Our description of Athens would be incomplete if we failed to mention the Presidential Palace Guards we saw during a walking tour.

The guards looked very handsome, if not exactly intimidating to potential attackers, in their skirts and tight wool leggings. 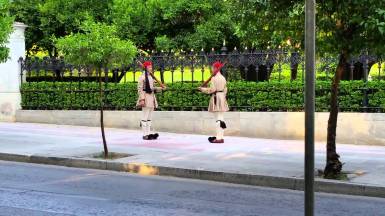 Modern Athens has a rich trove of street art — wall paintings based on the genre known as graffiti, and probably just as illegal, but taken to a higher level of artistry.

Here are a few samples we saw. 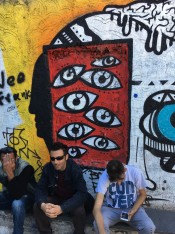 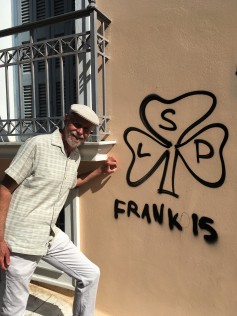 With this tip of our hats to the street artists of Athens, we now bid farewell to this most special of cities.

Our next stop will be a relaxing weekend at a boutique hotel in Mallorca, a large island in the Mediterranean Sea off the coast of Spain.

From this point onward, our itinerary will take us on a steady westerly direction, toward our home in California.