Tel Aviv By The Sea

The city spreads north and south along the seacoast and stretches inland toward the mountains.

The air is dry and warm, a reminder that you are in a desert, despite the irrigated greenery.

Culturally as well, Tel Aviv is like a Middle-Eastern version of Los Angeles.  The people you encounter seem busy, nonchalant and creative.  Restaurants are trendy.  Gay is cool.  Strangers have no particular interest in who you are or where you are from.

The architecture in Tel Aviv, while not exactly evocative of Los Angeles, has a similar low-slung, open-to-the-air quality.  Nothing seems very old.  But many of the concrete structures are looking pretty sad.

“[There is a reason why]. . . Tel Aviv is such a dreary city:  it is full of modern architecture.  Tel Aviv is more completely built up with the austere, stark forms of the International Style than any city in Europe or the United States.  It is a place in which the revolution Modernism sought was won, where modern architecture as far back as the 1930’s was not the radical style, as it was then in the United States, but the established one.  And it is one of the dullest urban environments anywhere.” 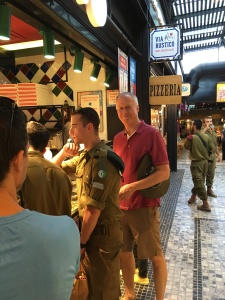 One thing that distinguishes Tel Aviv is the presence of so many young soldiers.  All Israelis must perform two-years of military service when the reach the age of 19.

They all mingle casually among the civilian population, some with guns slung on their shoulders, well trained in how to use them — or so we hope!

Even more do we hope, of course, that Israel and Palestine can solve the underlying issues that divide them and contribute to unrest and violence — and the need for soldiers on the streets.

Our overarching impression was that Tel Aviv is a vibrant, tolerant and diverse modern city.

Tel Aviv is also a place where, if you are Jewish, you can comfortably and fully embrace your identity as a Jew.

Those are its great virtues. 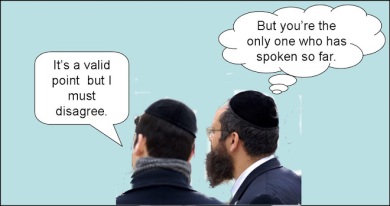 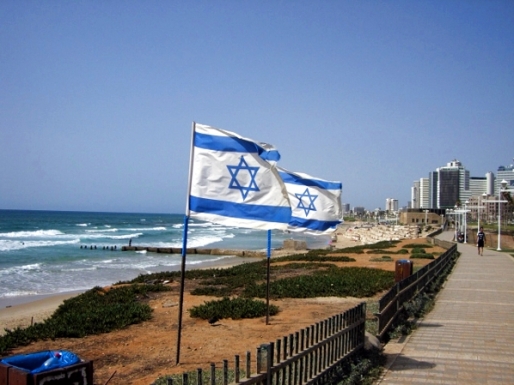 Our apartment in Tel Aviv was a half-mile or so east of the beach.  It was a downhill walk to the beach and an uphill walk back. To avoid too much sun exposure, we postponed our first visit to the beach until late in the afternoon on our first full day in Tel Aviv.

We miscalculated how quickly the sun went down in the fall, so it was twilight by the time our toes touched the warm Mediterranean water.

It was absolutely delightful.  The beach was quite wide, so we felt buffered from the traffic on the busy road behind us.  Tel Aviv’s skyline sparkled in the distance.

Families with children were playing in the surf alongside of us.  It was almost time to go home and the kids were enjoying their last splash.

In the sky above the beach, the airspace was noticeably busy.  We saw passenger jets heading toward into Tel Aviv’s two commercial airports, and military craft patrolling the coast.

We wandered up the beach to watch the volleyball players. 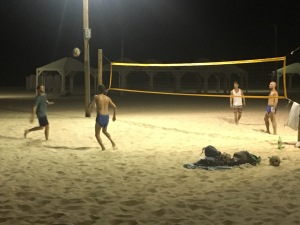 Some played traditional volleyball, while others were attempting the soccer version we had seen last year on Ipanema Beach in Rio di Janeiro where players are not allowed to use their hands.

To be sure, this was not Rio — for one thing, the men wore modest, boxer-style swimsuits, not Brazilian speedos — but it did remind us of evenings on Ipanema Beach.

Ancient Jaffa, Just Down The Road

Tel Aviv is a modern city, founded as a Jewish enclave a little over a century ago. 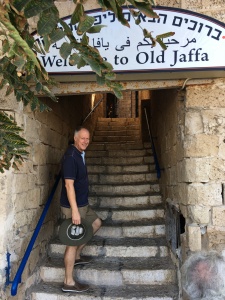 Just down the coast, in contrast, is the ancient, much smaller, walled port city of Jaffa.

In 1950, Jaffa and Tel Aviv were merged and today are governed as a single municipality.

Still, they could hardly be more distinct.

Among other things, Jaffa historically was the place of entry for Christian pilgrims coming to visit the Holy Land from Armenia, Greece, Rome and other points on the Mediterranean Sea.

Jaffa is still the home of an Armenian monastery and several old churches.

In the midst of all the Christian sites, Jaffa also hosts a mosque dating to Ottoman times.

We later learned that the ancient road from Jaffa to Jerusalem is called Jaffa Road, and the gate through which the road leads into the Walled City of Jerusalem is called the Jaffa Gate.  This is an indication of Jaffa’s significance to pilgrims to the Holy Land.

We spent a half day exploring Jaffa.  All of the structures are made of blonde sandstone, similar to what we would see a few days later in Jerusalem.  So, too, are the paving stones.  Jaffa is beautiful, ancient, spiritual and wonderfully intact. 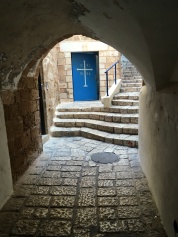 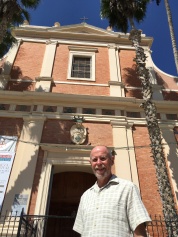 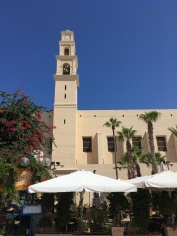 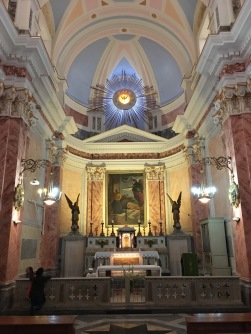 Jaffa as seen from the north

Our mid-day walk down to Jaffa and back also afforded us some nice sightseeing along the Tel Aviv waterfront as well as the streets of Tel Aviv.

Here are a few photos we took that day. 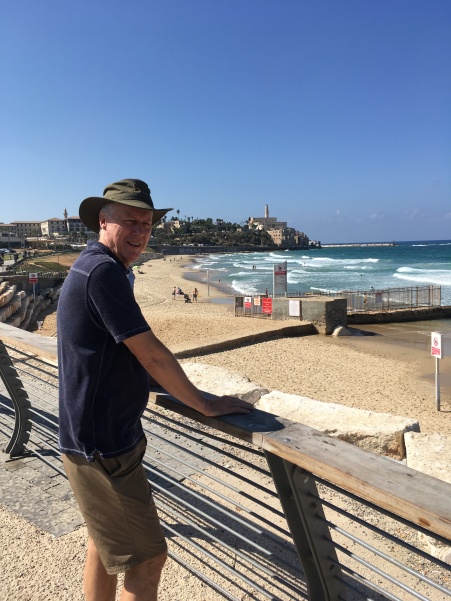 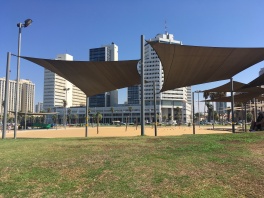 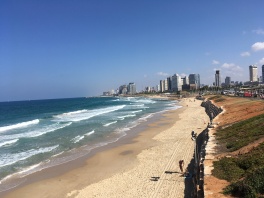 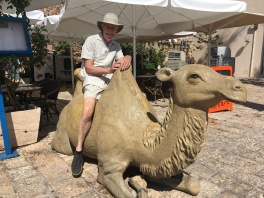 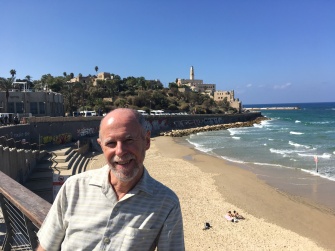 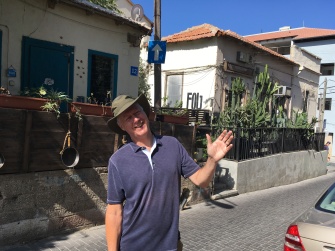 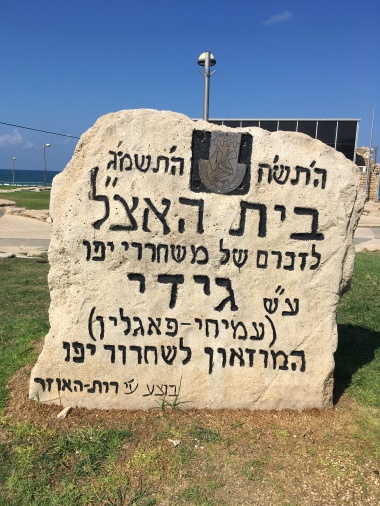 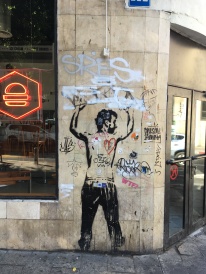 We felt very comfortable walking the streets of Tel Aviv, both day and night.  It is a safe city. 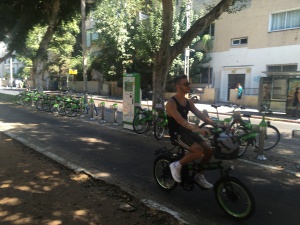 Stand-up motorized scooters and motorized bikes are very popular in Tel Aviv.  They can be a bit unnerving when they pass close by you on a walkway.

Neighborhoods in Tel Aviv have lots of mom-and-pop businesses operating out of small storefronts.  They reminded us a little bit of the souks in Marrakesh and Istanbul.

Tel Aviv is gritty, not pretty.  There is a rough, unfinished quality to the streets and walkways.  Nobody rakes the leaves that fall from the bushes and trees.

Young adults seem to thrive in Tel Aviv.  It is prosperous enough to provide decent job opportunities, and housing appears to be affordable. 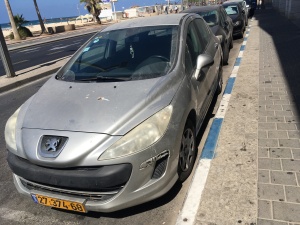 Parked cars in Tel Aviv often have a heavy layer of dust.  It’s a desert.  Keeping a car clean and shiny is a major challenge in Tel Aviv.  Most car owners don’t bother.

Tel Aviv is thoroughly Jewish but not overtly religious.  We saw few synagogues.  People on the street for the most part appeared secular.  (Jerusalem, as we would come to learn, is quite different in this regard.) 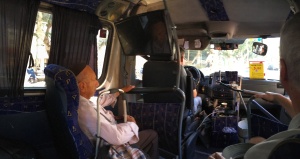 Our plan was to catch a bus from Tel Aviv to Jerusalem.  We waited near our apartment for a city bus to take us to the central bus terminal.

Eventually we figured out that the “Number 5” we were waiting for was not a city bus at all, but a van.  It was awkward climbing aboard with our suitcases and backpacks.

The old man in the seat across the aisle scowled at our luggage.

The bus terminal was a massive, multi-story monstrosity, with the bus loading area on the top, high above the street.

We passed through tight security on the way in.  The guards had what looked like high-powered rifles.  But they waved us through casually.

The bus that took us to Jerusalem was modern and clean.  The roads were good, and the ride was pleasant.