On a pleasant, slightly overcast Saturday in mid-September, we took a ferry boat cruise from Istanbul up the Bosphorus Strait, which divides Europe from Asia.

Like Istanbul itself, the Bosphorus is rich in history.

The strait is lined with ancient fortresses and palaces, as well as numerous busy, populated modern towns.

Crossed by several impressive suspension bridges, the Bosphorus is surely one of the most beautiful waterways in all the world.

Today the Bosphorus is a main shipping channel connecting Russia with the Mediterranean.

At the northern end of the strait, on the Asian side, our boat docked for a couple of hours at a little town called Anadolu Kavaǧi.

Accompanied by a small pack of friendly local dogs, who seemed happy for the company, we hiked up to an ancient Greek fortress called the Yoros Castle.

At the hilltop castle, we enjoyed a sumptuous view, looking north toward the immense Black Sea.

We had the good fortune of making fast friends among the Turkish people on the ferry, both on the journey up the Bosphorus, and then again on the way back to Istanbul.

On the way up, we found seats in the front of the boat with a nice Turkish family.  Mother and Dad appeared to be in their 50s.  They were accompanied by a 15- or 16-year old son.  The warm relations between parents and son, especially the mother and son, were very touching to witness.  The boy had none of the pouty attitude so typical of teenagers in the west.  He was really quite happy in the company of his parents.  Apparently an only child, he was dearly loved by his parents.

After a few minutes, the boy leaned over and inquired, using his best English, where were we from?

“America,” we answered with a smile.  He relayed the information to his parents.

Raised eyebrows and general approval showed on their faces, along with keen interest.

Then the next question, addressed to Frank:  “How old are you?”

Sensing an opening, Frank responded with a grin, “thirty-one.”

This, too, was relayed to the parents.  After the briefest of pauses, as they realized they were being kidded, this remark was met with jovial good laughs.

Now we had won their trust.  The boy kept up his English until he became exhausted.  They asked us to pose for pictures.

Then a young girl, about the same age, moved over from the benches just in front of ours.  She was studying English at school, had overheard our conversation, and was determined to try to engage us in conversation.  Her first attempt to speak English outside of school.

“Good for you!” we said.  It takes a lot of courage as a student to try speaking to a native speaker of the language you’ve been studying in school.

The girl was accompanied, not by her parents but by her grandparents, who did not know a word of English.  (We were equally deficient in Turkish.)  But they obviously had encouraged her to exercise her English skills by speaking to us, and we could see they were pleased we responded.

At first we thought the girl might be related to the boy we’d been talking to, but, no, she said they had never met before.  (Later that day, on the return trip, we saw the boy and girl engaged in animated courtship-style conversation, under the approving but watchful eyes of both families.)

She said to Frank, “You have pretty eyes!”  Now wasn’t that flattering, and just a little bold on her part?

“We hope you have the chance to come to America some day, to study English,” we told her.  As of now, she can only dream of the prospect.

Soon it was time for yet more pictures. 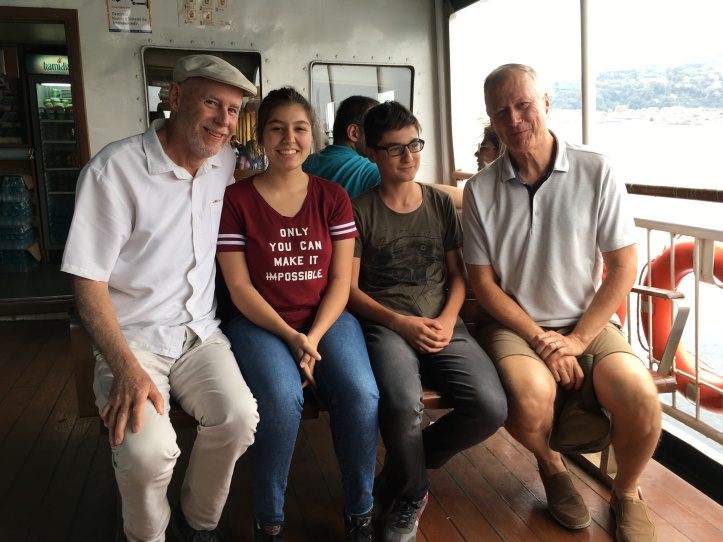 As a consequence, we were treated like celebrities.  It was as if Arnold Schwarzenegger were on the boat.  Everybody wanted to meet us.

Nobody in either family, it seemed, had ever met any Americans before.  They were fascinated by us, and appreciative of our approachability and good humor.

The warmth they extended to us was genuine and keenly felt.  The boy and his parents soon were sharing with us their two large bags of roasted nuts.  We could not refuse.

From these brief interactions, we concluded:  More Turks to need to meet more Americans!  Let there be no doubt!  The two cultures have so much to exchange.  The people of both countries are engaging, decent and good-natured.

We all had a jovial time together, heading north on the Bosphorus ferry.

Later that afternoon, after our excursion at Anadolu Kavaǧi, we had a similar experience on the return trip.

This time we found ourselves seated across from an uncle and nephew.  Neither spoke any English, but the nephew overcame his shyness and began communicating with us using a translation app on his smart phone and Brian used Google Translate to respond.

He was a friendly lad, about 19 years old, and just beginning to sport a beard.

The conversation began with the now-familiar question:  “Where are you from?”

When we first arrived in Turkey a week earlier, we had wondered whether Americans might be unwelcome.  We briefly considered telling people we were from “Canada” to avoid any unpleasantness.  It was just a passing thought.  Now we realize it would have been a missed opportunity.  Uniformly, the reaction of Turkish people when they learned we were from the U.S. was quite positive.

Because of the risk of terrorist attacks, Americans have been avoiding Turkey almost entirely, based in part on advice from the U.S. Department of State.  (Check out this warning on the State Department website.)

These precautions are understandable, but still regrettable.  We were glad we took the chance and went to Istanbul.  We really enjoyed our simple interactions with ordinary Turkish people.

We came away with the happy thought that we might have contributed in a tiny way to the improvement (or at least maintenance) of relations between our two countries.

But we digress.  Let’s get back to our conversation with the young man and his uncle.

They reacted with the same curiosity and wonderment as our friends that morning in learning we were from America.  Again, we got the sense we were being perceived as celebrities.  Again, we got a request to pose for pictures, and we gladly complied.

With these initial pleasantries out of the way, the conversation (still using the translator app on our smartphones) now took a turn toward the serious.

“We do not like the colonial attitude of your government,” came the next message.

Then Frank threw them a curve ball.  “My son converted to Islam when he was 16 years old, more than 20 years ago,” Frank wrote.

You should have seen their faces.  They were completely amazed.  This was pleasing information indeed, and utterly unexpected.  They asked:  “There are six million Muslims in America, is that correct?”  Something like that, we responded, all smiles.

And you, they asked Frank, “Have you also embraced Islam?”

It was a peculiar form of communication, this back-and-forth on our phone screens, with the little pauses in between, watching one another for facial reactions as each message was read and understood.

A warm bond ensued.  We got the idea of purchasing four teas from the snack bar, which we served to our guests from a tray.  It was the perfect gesture of friendship.  They did not expect it and were warmly appreciative.

“We are winning the world over with diplomacy,” we thought, “one conversation at a time!”

Our motivation in taking the Saturday afternoon Bosphorus cruise was nothing more than sightseeing.

We simply wanted the experience of being out on the water in Istanbul harbor and along the famed Bosphorus Strait.

We were looking forward to the opportunity to escape the from the crowded inner city for a few hours.  We wanted to feel the sea breeze.

But what we experienced, besides all of that, was a great sense of connection with a wonderful mixture of very nice Turkish people.  With the language barrier, it can be difficult to connect with locals.  While sitting across from each other for an hour-long boat ride, the bravery needed has a chance to build.

We will never forget their warm companionship.  It was a highlight of our visit to Istanbul.