What a delightful place is Munich.   No building in the historic area can be taller than the cathedral spires, eliminating tall skyscrapers for office or residential use, eliminating the typical urban crunch of people.

Add in the large percentage of people who commute by bike, and the city becomes very livable.  It feels like a smaller town, but with an urban sophistication.

As soon as we walked into town the first night, we encountered a great music scene.  An acoustic rag-tag band was playing classic pop numbers in English and the whole crowd was singing along.

They seamlessly transitioned between Michael Jackson, Earth Wind and Fire, Beach Boys and the Beatles.  For percussion they beat an old string-less cello that had been duct taped together.  They flowed, the crowd sang and we were hooked on the joyous scene.

We were so enchanted with the Bavarian charm, the beer gardens, the easy style, the homey Airbnb apartment, that we immediately extended our five-day stay to seven days.  It was a great place to settle for a while.

Beer gardens abounded and we quickly learned that joining the crowd in drinking beer at lunch often led to some very dull and sleepy afternoons.

So we resolved to wait until later in the day, and we had the same steadfast dedication that most folks have with their New Year’s resolutions.

Floating in the English Garden

Munich’s English Garden (Englischer Garten) is larger than New York’s Central Park.  It includes a series of channels from a fast moving river that the locals float down, climb out, walk back to the top and float down again.

In a couple of spots, the water was slightly diverted with a trough.  This trough was meant to slow the river down, but it also created a continual wave action.

Years ago a visiting Californian surfed the fast flowing water and now it is all the rage among locals.  Surfers line the river at these spots and wait until the current surfer falls, then the next jumps in.  It was all great fun.

To exit the fast flowing current and to avoid colliding with the surfers downstream, the floaters grab a cable stretched across the river to stop.  They then can continue down the river between the surfers, or work their way to the side and climb out using a ladder.

We rented bikes one day and rode up and down the full length of the beautiful park.  It is called English Garden because it is designed in an intentionally random way.  Trees are not in rows but scattered throughout the park.  With Munich’s regular rain, the rivers were flowing and the grass was a beautiful and lush green.  On a warm Sunday afternoon, the crowds headed to the park.

Geeking-Out at the Deutsches Museum 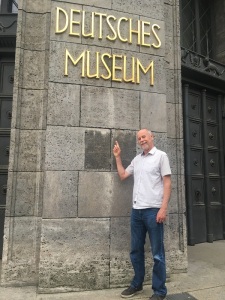 Munich’s Deutsches Museum is one of the world’s largest museums dedicated to science and technology.  It takes at least a full-day to visit and could easily consume several days if one wanted to go in-depth with their 50 different exhibits. They include ships, steam engines, electricity, renewable energy, windmills, all types of machine tools, mechanical toys, paper, musical instruments, etc, etc, etc.

Together we enjoyed strolling a couple of hours.   Then Frank went home for a nap and Brian continued on for four more hours until closing time at 5 PM.

For Brian, a guy who at home eagerly looked forward to the arrival of his monthly Family Handyman magazine, it was a bit of a dream to geek-out at a technology museum like the Deutsches Museum.

There were a couple of rooms dedicated to the evolution of ships, including actual, huge, old ships and submarines.  For these they would cut open the sides to show the internal workings of the vessels.

Brian’s grandmother, at the age of 12, came over from Norway by ship sometime in the late 1890’s.  It was fascinating to see the many model ships on display from that period.  Seeing the types of combination sail and steam powered ocean vessels used in that time really brought to life the relatively primitive transportation used in his grandmother’s transatlantic journey.

The museum covered the evolution of technology and tools over time.  For instance, there were numerous scale models of windmills showing their advancing technology over 1,000 years.

For many of the tools, they had actual working machines from the period.  The steam engines filled a couple of rooms.  Most of them were in working condition and the museum hosts a rotating schedule of live demonstrations of the ancient equipment.

For other tools they had fantastic models showing the evolution.  For instance, with wheel-powered tools they displayed models for hand-cranked lathes, to human treadmills and even wheels powered by oxen continuously walking up an inclined wheel.

The picture below showing prisoners walking up a wheel of steps was they type of hard labor imposed upon Oscar Wilde during his two years of imprisonment for being gay.  When people talk about how their work is a real treadmill, they have absolutely no idea how bad it used to be.

Munich was a charming, friendly, beautiful and easy-going city.  There’s just something about that Bavarian charm. 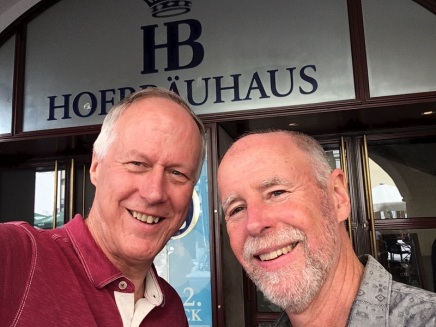