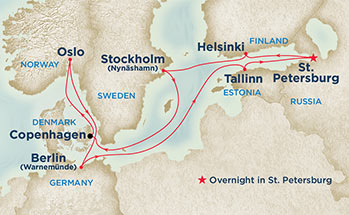 The two of us both trace major portions of our ancestry to Scandinavia.

Our family names give us away.

Naturally, therefore, from the beginning of our “Vagabond Year” adventure, we have had our sights Scandinavia as a destination we intended to visit.

We booked a voyage on a luxurious cruise ship.  It was the easy way to see a bunch of Baltic countries — including Norway and Sweden — in a short amount of time.

We booked a nice apartment in Copenhagen for a long weekend, prior to embarking on the cruise.

All weekend long, we found ourselves singing the chorus to the corny song that you can hear in the link above, “wonderful, wonderful, Copenhagen!”.

Why?  Well, because Copenhagen really is wonderful!

In its architecture and with its intricate network of canals, Copenhagen reminded us of Amsterdam, another great port city of the north.

We took a boat tour, which really helps orient a new visitor to Copenhagen’s charming network of canals and waterways as well as its big harbor.  It is the water that gives Copenhagen its identity. 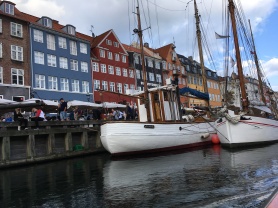 Like Amsterdam, Copenhagen also is populated with lots of strikingly handsome, generally tall men.  Their unaffected beauty can cause your heart to ache.

We saw many a statuesque young dad pushing his infant in a baby stroller, sometimes accompanied by his wife, other times alone.  It was so touching.

Everyone in Copenhagen seemed happy, physically fit and well fed.  Public transportation is excellent and cheap.  The streets are clean and quite safe.  The city center is compact and perfect for exploring by foot.  What’s not to like?

Copenhagen also is completely and warmly accepting of gay people.  Being gay in Denmark is simply no big deal.

It all seemed very enlightened.

We stopped by several gay bars in Copenhagen.  People were friendly and English was widely spoken.  Oddly enough, though (considering how progressive Denmark is), they still allow smoking in the bars.  Yikes!

Especially in the gay bars, it seemed, most of the patrons were smokers.  The smoke was unpleasant and drove us away.

For three days, we just wandered about Copenhagen, admiring everything we saw. 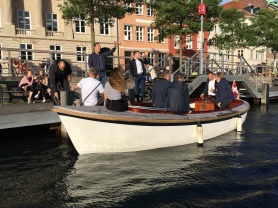 Party Boat on the Canal 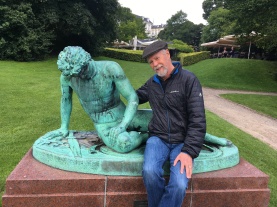 Along the lake near our apartment 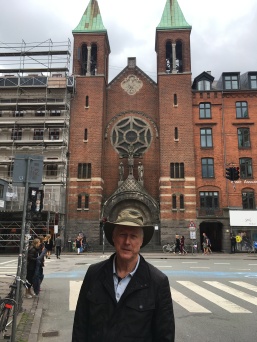 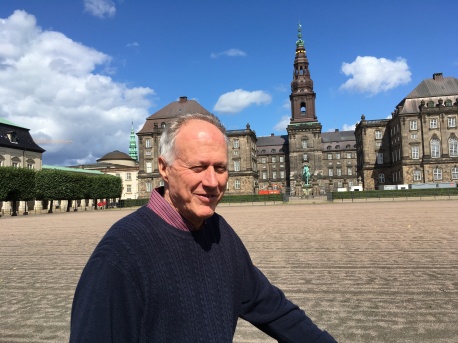 Brian at the Royal Castle 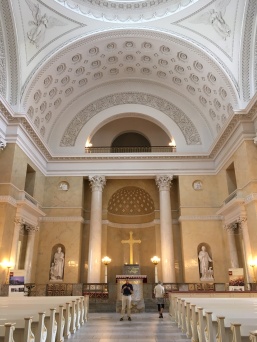 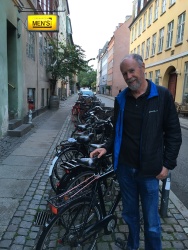 Late on Saturday afternoon, we wandered into the Town Hall Plaza.  There was a huge television screen set up in a corner of the square.  They were getting ready to broadcast a women’s soccer championship game between Denmark and another European country (we think it was France, but no matter).

Just as we were circling the perimeter of the big crowd, a band in the stadium from where the event was being broadcast commenced playing the Danish national anthem.

Our timing was perfectly fortuitous.  The boisterous crowd instantly became attentive.  Complete silence descended upon the square.  Without prompting, everyone stood at attention; those who had been sitting rose quietly to their feet.

Then, they began singing along in unison — the Danes in the square as well as those in the stadium on the television screen — the words of the Danish national anthem.

It was extraordinary to see such an honest, unaffected love of country displayed with plain sincerity and no trace of embarrassment.  Wonderful, wonderful Denmark!

On Monday morning, the day we were scheduled to set sail from Copenhagen, we walked over to a large plaza near our apartment, pulling our suitcases behind us. 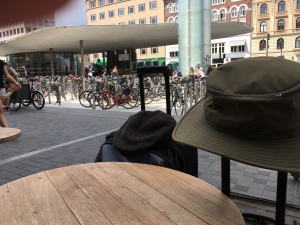 Our plan was to catch the public bus heading out to the cruise ship terminal on the harbor.  We got a little lost on the walk, however, and as a consequence we missed the bus we were aiming for.  There was a 30-minute wait for the next bus.

(The delay was of no consequence.  We could board the ship at any time of our choosing that day; it was not scheduled to embark until after 5:00 PM.)

Rather than sit for a half-hour on the crowded bench at the bus stop, we crossed the plaza to a café.  We took a table outside and had coffee and Danish.  The pastry was delicious — sweet and fresh and generously made with lots of rich butter.

Just imagine, if we had caught our first bus as planned, we would have missed the singular pleasure of having a Danish in Copenhagen — an error of omission!

Lucky for us, we missed the bus and enjoyed the Danish.

The Ever So Regal Princess 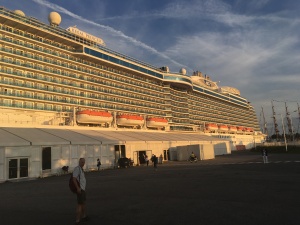 We were set to tour the Baltic Sea and a half-dozen ports of call on a large (3500-passenger) cruise ship, the Regal Princess.

She was a worthy vessel.

We timed our excursion for late summer, when the days were still long and the weather still fair, and before the chill of autumn and the dramatically shortened days of winter.

Exploring Scandinavia by sea, on a massive, luxurious cruise ship, turned out to fit our needs very nicely.

F&B with the Regal Princess

Daniel, the funniest waiter, from Mexico 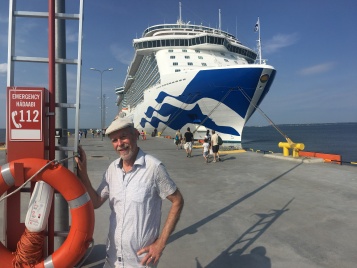 Brian with his favorite Princess

The great ship was in effect a large-scale, waterborne resort hotel.  She transported us effortlessly from port to port.

Ah, yes!  This was vagabonding in style.

Food aboard ship was plentiful, varied and of high quality — a veritable smorgasbord, you might say.

We had a whole class of friendly servants at our disposal — room stewards, waiters and assistant waiters, cooks and servers.

Not least of all, we enjoyed ample and highly professional on-board entertainment.

Besides the usual cruise-line singers and dancers, we had two memorable shows by a Beatles tribute band who managed to capture both the look and (more importantly) the sound of the legendary music group.

We loved the cruise.  It allowed us to get our feet on the ground (literally) at each port of call, and to immerse ourselves (ever-so-briefly) in the different cultures of this scenic and (for us) ancestral region.