We drove in the rain and crossed from England into Scotland on the western end of the border. 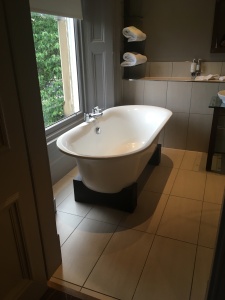 We spent our first night in Edinburgh in a boutique hotel in a Victorian neighborhood out near the zoo.

This was, we came to realize, one of at least three boroughs that make up Edinburgh.

It is a peculiarity of Edinburgh that several distinct cities, each built more than a century after its immediate antecedent, combine to form a single large metropolis.

In Edinburgh, “when the great exodus was made across the valley, and the New Town began to spread abroad its draughty parallelograms, and rear its long frontage on the opposing hill, there was such a flitting, such a change of domicile and dweller, as was never excelled in the history of cities:  the cobbler succeeded the earl; the beggar ensconced himself by the judge’s chimney; what had been a palace was used as a pauper refuge; and great mansions were so parcelled out among the least and lowest in society, that the hearthstone of the old proprietor was thought large enough to be partitioned off into a bedroom by the new.”

We had dinner on our first night in Edinburgh at a nice pub next door to our hotel.

At breakfast the next morning, we tried the Scottish dish called haggis.  The very description of its ingredients is repulsive to many, but Frank liked the haggis.  It reminded him of scrapple, a similar concoction popular in his home town, Philadelphia.

After breakfast, with a few hours to spare before we could check into our apartment in central Edinburgh, we visited the nearby zoo.

The quaint and eclectic little Edinburgh Zoo originated as the hobby of a wealthy benefactor in the 19th Century, on the grounds of his estate.

The zoo’s exotic animals and displays were interesting and informative, but what we especially enjoyed was observing the Scottish school groups and Scottish families who were visiting the zoo that day.

Edinburgh Zoo gave us an unusual but sweet introduction to a new city and a new country.

Meanwhile, historic Edinburgh was waiting to greet us.  We drove into the City Centre and found our apartment.

Athens of the North

Whereas our hotel had introduced us to an Edinburgh of the 19th Century, our apartment was in a different Edinburgh altogether.

In this Edinburgh, dating from the 18th Century, the buildings are faced with blonde sandstone and are of Edwardian design.

This second of the three Edinburghs we discovered reminded us of Bath, where we began our U.K. Road Trip, but it is much more expansive than Bath in scale.

Edwardian Edinburgh was a planned urban development with a uniform design.  The streets are wide and laid out in a neat grid. 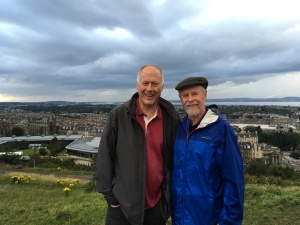 After getting settled in our new apartment, the first thing we did was to march directly up a tall hill just across the main road.

Up at the top, we looked down upon a third Edinburgh, completely different from — and much older than — the other two we had already discovered.

It was sunset and the earth was beautifully lit.

This was the Edinburgh of the Scottish Enlightenment, the “Athens of the North,” as it was known.  This was antique Edinburgh, seat of the Scottish Crown and a beautifully preserved medieval walled city, built on a hilltop and surrounded by higher hills.

From that moment on, we were utterly enchanted by Edinburgh.  There was no turning back. 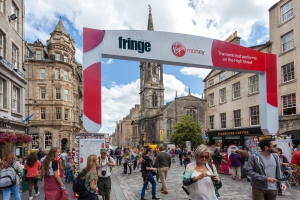 Every August for the past 70 years, Edinburgh has hosted the famous Fringe Festival, which its sponsors describe as “the single biggest celebration of arts and culture on the planet.”

We managed to come and go a week before the Edinburgh Festival opened, so we missed the entire event.

But this was more-or-less deliberate on our part.

Throughout our travels, we have tended to avoid major events in the cities we have visited.  Last year in Rio de Janeiro, for example, we timed our itinerary to visit after Carnival, and before the 2016 Summer Olympics, to avoid both events.

Event-focused travel is different from the kind of travel we have been pursuing. 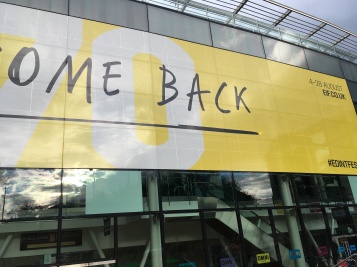 Still, all over Edinburgh during our visit we saw preparations underway and posters advertising the various upcoming performances.

You could feel the excitement and anticipation, as if we  were on the edge of something big.

We can only hope it was.

Some day we might well return to Edinburgh for the Fringe Festival.

Maybe, too, we will return to Rio for Carnival.

Those would be very different blog stories! 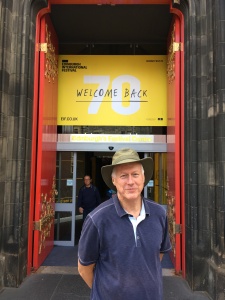 Most of our time in Edinburgh we spent in the old Medieval section, where Edinburgh Castle and the Royal Palace are located.

In the 18th Century, as Edinburg’s native son Robert Louis Stevenson described in the book quoted above, the city planners in Edinburgh built a whole new city over on an adjacent hill.  The entire middle class moved out, leaving the old Medieval section to the poor and downtrodden.  It became very dilapidated and apparently was a bleak place for a couple of hundred years.  Eventually, though, it was cleaned up, and its streets, alleys and many of its old buildings were preserved and restored.

Today, Medieval Edinburgh is a gem and a delightful place for visitors.

We hope our pictures below help illustrate how beautiful it is in old Edinburgh.  We loved it. 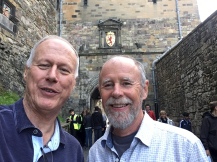 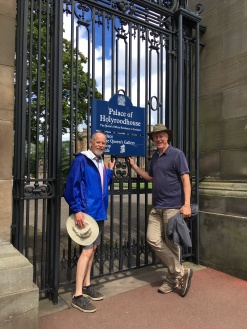 Another fine feature about Edinburgh are the high hills just to the north of the old Medieval section.  It was another opportunity for some meaningful exercise, and the views from up on the hills were spectacular. 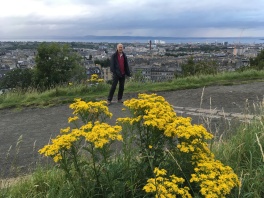 If we have any regret about this inaugural visit to Scotland, it is that we had only time enough to visit Edinburgh alone.

There is so much more of Scotland we would love to see!