Over the past decade or longer, we have enjoyed an annual trip to Shasta Lake in the far north of California for a houseboating weekend, with a rotating group of gay friends.

One of them, Fred, who’s been a regular, refers to the outing as “an adventure on the low seas.”

But for several years running, a severe drought in California and a dramatically shrunken lake caused a halt to this annual adventure.  There was simply not enough water to fill the lake.  It was like an empty bathtub, its red banks barren and dry.

Ah, but this year things turned around rather dramatically.

While we were away in the early months of 2017, enjoying life in the South Seas (where of course it was summer), California endured record rain and snow fall.

The whole state was deluged. 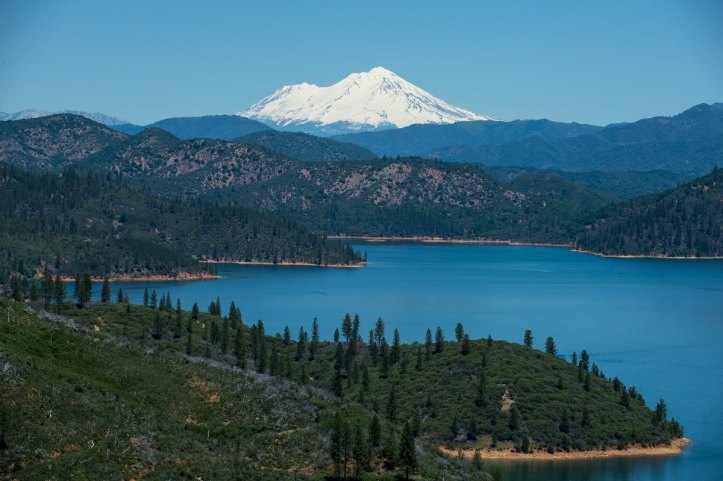 In contrast to the drought years, this year the high mountains were buried beneath huge deposits of snow, and all of the rivers and lakes were filled to overflowing.

There was so much precipitation that one major dam in Northern California, the Oroville Dam, was in danger of a breach when an emergency spillway collapsed under the roaring waters.  Nearly 400,000 people downstream had to be evacuated for a few days.

Fortunately, nearby Shasta Dam held tight, and the massive lake upstream of the dam rapidly reached its maximum capacity for the first time in years.

At last, the lake was full again!

In late May, as it happened, we were home in California to celebrate the graduation of Frank’s son Connell, who earned his bachelor’s degree in Geography from San Francisco State University.

Having heard about California’s ultra-wet winter, we felt eager to return to Shasta Lake.

So, we adjusted our travel plans, tacking on some extra time in California after the graduation.

With a few emails sent from abroad, we were able to assemble an affable group of friends for a return “adventure on the low seas.”  It required very little convincing to find a compatible crew of eight, including the two of us.  A light touch was all it took.

Shasta Lake is held back by an absolutely ginormous dam in the mountains just north of the northern reaches of California’s Central Valley, just a couple of hours south of the Oregon border.

The big dam at Shasta plugs up a total of five rivers, creating a spidery lake with over 300 miles of shoreline.

The massive lake inundated what used to be river valleys and stream beds.  Whole towns were swallowed up, along with highways, bridges and old Indian settlements.  (Check out this link for the story of one town that ended up at the bottom of the lake.)

When it is full, Shasta Lake’s level reaches high up into the mountains and hills, its shoreline touching what formerly were remote and inaccessible heights.  The lake, as a consequence, not only offers lots of places to explore on a houseboat, but also a huge variety of locations to tie up at night that are completely private and quiet, and surrounded by the most beautiful scenery.

Bald eagles are a common sight in these areas.  They feed on fish in the lake, diving down from above to snag their prey from the water.  Bears live around the lake in abundance as well and we have seen a number of them over the years.

Because the lake is in such a remote area, far from any human habitation, there is no ambient light at night, and the stargazing is breathtaking.

For the wildlife on Shasta Lake, an occasional short visit by a houseboat full of humans is not much of an intrusion.  The animals seem oblivious to the human invaders, and the humans in any event never stay long, and if they are good they leave nothing behind when they depart.

For us humans, a houseboat outing on Shasta Lake affords a rare opportunity to experience the utter peace and tranquility of nature (at least on a weekend when there are not a lot of boaters out).

The lake itself, conservationists would argue, is utterly unnatural, an intrusion on the natural world, a human — not a natural — construct.

Oh, but it is absolutely beautiful out there on Lake Shasta.  Absolutely!  Beautiful! 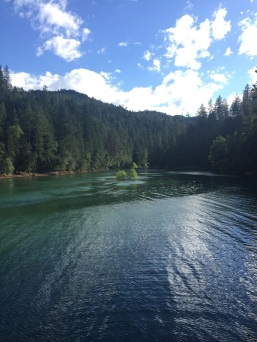 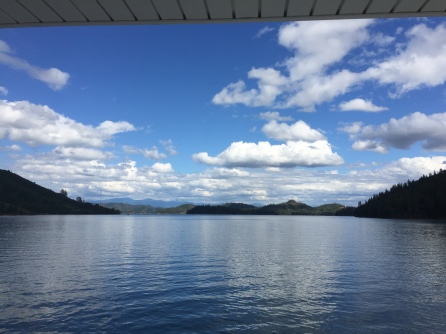 Our houseboat was basically a mobile home on pontoons. 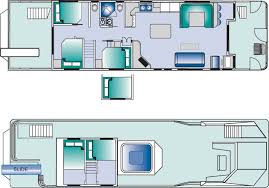 It had a full kitchen, a BBQ, a few very small bedrooms, 1 1/2 bathrooms, exterior decks, both upper and lower, a hot tub, and a water slide.  Who could ask for more?

Our days started with a delicious breakfast served aboard (the aroma of frying bacon filled the air).  Then around 10 AM we would untie and cruise around the lake for a leisurely couple of hours.  If we chose, we could stop the engines in the middle of the lake for a swim in the deep water before lunch.

In the afternoon, we would explore one of the lake’s many arms to pick a picturesque spot to spend the night.  Once the boat was secured (always an exciting moment, with ropes and stakes), and the boat’s engine turned off, our corner of the lake would become very quiet and peaceful.  The bar would open for cocktail hour, more swimming would ensue, and the cooks would start to assemble dinner. 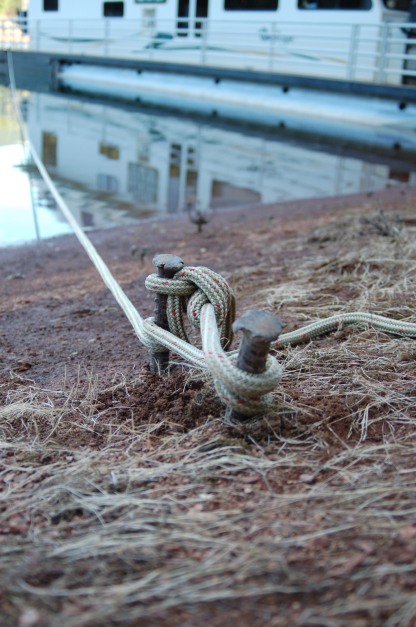 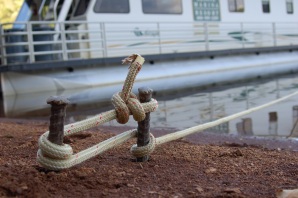 Swimming in Shasta Lake is a delight.  By late Spring, when we traditionally schedule our outings, the top ten or twelve inches of water is usually fairly warm, while the lower depths retain some of the winter chill.

Our typical bathing routine on the houseboat, in lieu of a shower, is to jump into the lake, climb back out and soap up with Dr. Bronner’s liquid castile soap, and then plunge back in for a final rinse.  It is very refreshing, especially on cool mornings.

Joining us on the 2017 cruise were Fred and Philip, our steady and fun shipmates from several past cruises.  We also had four newbies:  John and Casey from Chico, and Michael and David from Marin County.  The latter two couples had not been on our houseboat adventure before, and had not met one another.  Still, everybody hit if off immediately.

The long weekend was filled with constant laughter, friendly banter, eating and drinking, board games, jokes and story telling, and an occasional song. 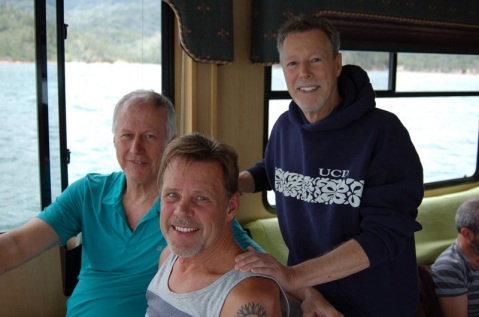 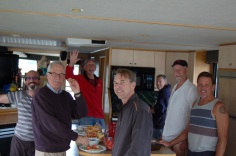 Michael and David introduced a new variation on this year’s cruise:  They brought along their paddleboards.  The calm waters of the coves where we tied up each night proved ideal for paddleboarding, and several of us tried it for the first time.  We expect paddleboards might become a fixture on our Shasta vacation in future years. 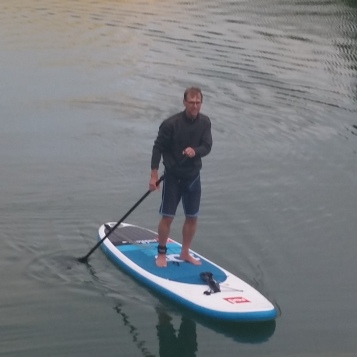 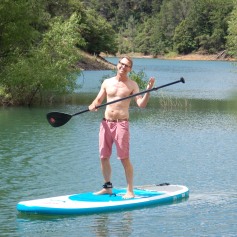 Meals aboard ship are always shared as a group.  We split up the menu planning and preparation very harmoniously among the four couples on board, with each pair taking responsibility for a couple of meals.  Food was fabulous and overly-abundant. 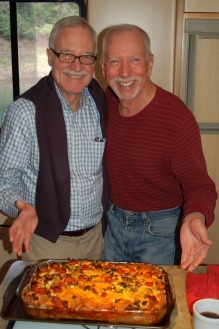 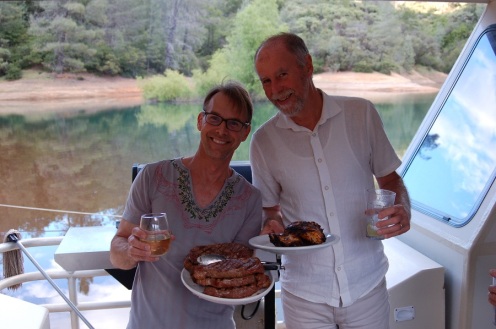 Life aboard a houseboat is always just simple and good.  So it was again this year, with Fred and Philip, John and Casey, and Michael and David…. 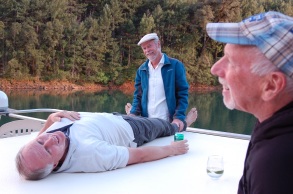 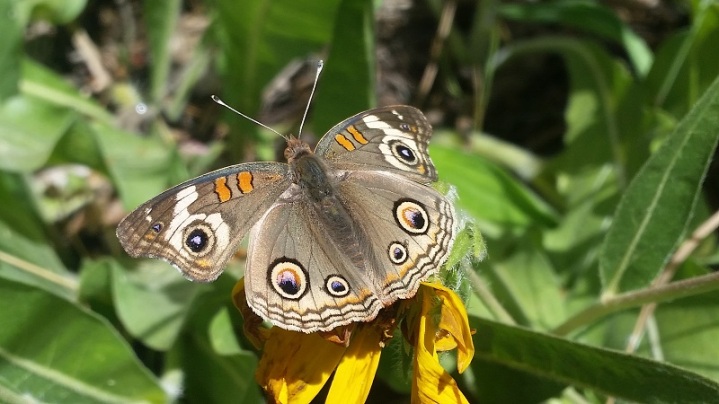 After our long hiatus away from Shasta Lake during the drought years, it was so much fun to be back on the lake, and with such a wonderful group of dear friends.

Amazingly enough, literally just one day after returning the houseboat to the harbor, saying goodbye to our shipmates, and driving home to the San Francisco Bay Area, we headed to the airport and boarded a flight to Europe….