In New Zealand, multi-day hikes are known as tramping, and they have some real doozies.  We hike regularly back home in California, getting in a two- to three-hour hike most weeks.  Turns out that was child’s play compared to Kiwi-standards.  Let us tell you about the two toughest ones we did during our three and a half weeks in New Zealand. 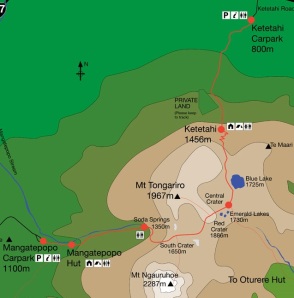 In the center of New Zealand’s North Island, this amazing eight-hour trail is 19.4 kilometers (12 miles) and climbs 3,560 feet in elevation as it passes through a saddle between two volcanoes.  On the map above, we followed the red line from the top of the map to the lower left.

We departed early in the morning, just as the sun was rising above the mountain ridges.

The hike starts off in a large meadow with low lying brush and grass, starting a gradual ascent upwards.

We enjoyed this portion as we eased into the hike, seeing the morning light across the valley, knowing we had some major climbs coming.

Then the climbing begins.  Here is Frank looking back at the trail across the valley we had just walked.

And we continue to climb higher up the volcanic rocky trail, leaving the starting point further and further below. 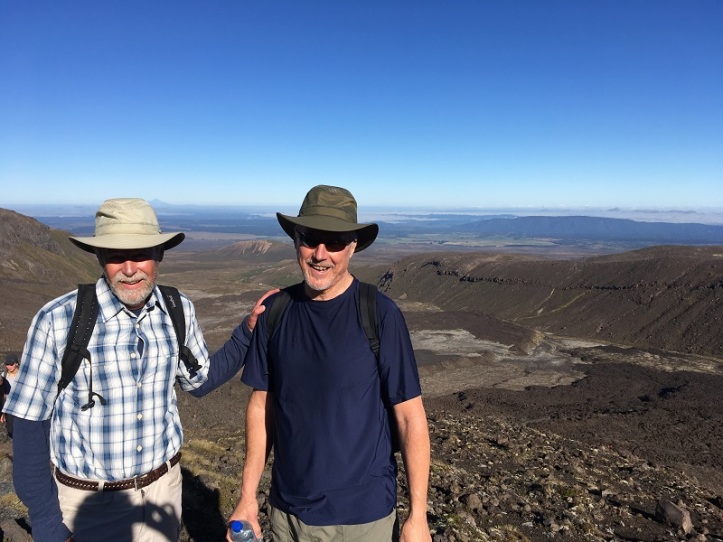 At the higher elevations are several beautiful lakes, incredible formations inside the craters and volcanic steam which gave the odorous impression that fellow hikers were all enjoying egg salad sandwiches.

Eight hours, lots of climbing up and descent back down the other side.  Spectacular, moon-like vistas throughout.

We grabbed the bus back to a point near our cabin in a little town called National Park.  It took a half hour for the bus to circle around the mountain just to get back to our starting point.  We were spent.  The beer in town tasted pretty good.

At the top tip of the South Island of New Zealand is the little town of  Picton.  That was our launching point for a four-day, 44 mile hike along the Queen Charlotte Track.  A boat took us across Marlborough Sound, up to the trailhead, and we hiked back towards Picton.

Unfortunately, the weather report was not looking very promising for the hike days.  There was a good size storm coming in for the last few days of our trip. 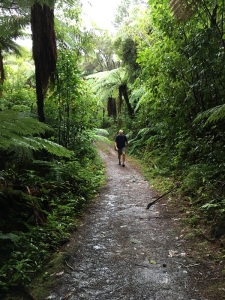 If the prior hike on Tongariro was like being in the movie, “The Martian”, then the Queen Charlotte Track was more like being on “Gilligan’s Island”.  The trek certainly had lots of elevation as it hugged the ocean bays, but it was mostly shady and filled with beautiful fern trees.

We booked this trek through a tour operator who arranged accommodations for us each night in hotels that are only accessible by water or hiking trail.  They also arranged to move our luggage from hotel to hotel by water taxi while we were out on the trail.  A fairly luxurious way to tramp. 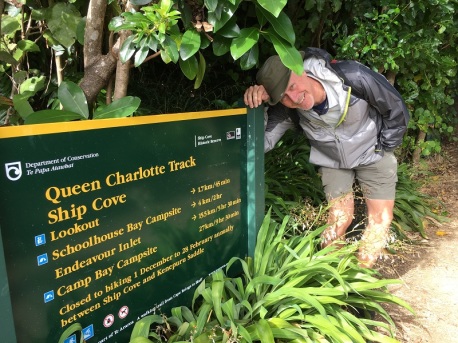 The water taxi dropped us at a serene, unspoiled little inlet called Ship Cove.   It was on this very spot where the legendary Captain James Cook set up a base on several visits to the South Island in the 1770s.

And away we go.  Climbing a bit right in the beginning and then along the ridge.  It seemed like a reasonable day’s walk, well within our range.

The views of Marlborough Sound from the trail were absolutely beautiful.

But the trail was very long.

Late that afternoon when we arrived at the first hotel and the desk clerk asked us to write down what we wanted they to pack for our lunch the next day, we had trouble holding the pen and writing was pretty illegible.

The first day’s hike took more out of us than we realized.  We spent a very restful night at the cute little boutique hotel.

At the first night’s hotel

View from our window

After a good night’s rest, we hit the trail again.  More fern trees and stellar water views.  The weather held off pretty well. 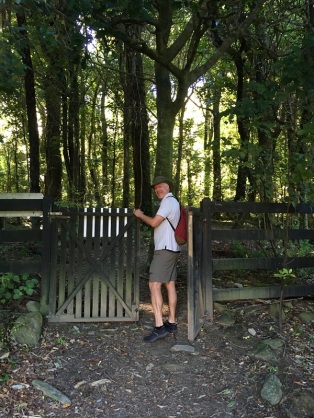 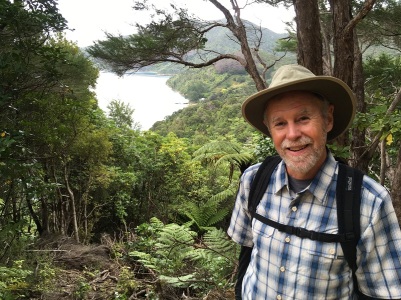 Day three of the hike was supposed to be the toughest, 13 miles and lots of climbing.  And the rainstorm hit with a vengeance that day. It was a tropical-style downpour.

We decided that hitching a ride with our luggage to the next hotel sounded pretty darn sensible.  So we swallowed a bit of pride and met the water taxi at 10:30 for a half hour ride to the next night’s lodging.

In addition to a day to let our muscles recover from the first two days, we had a chance to explore the hotel’s grounds for some of their interesting features. 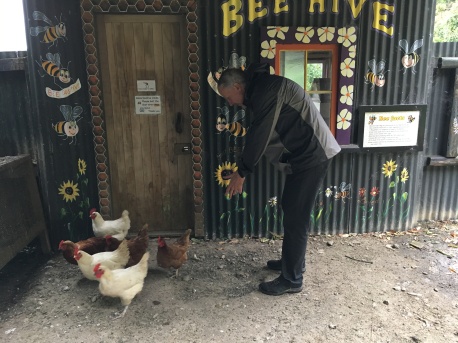 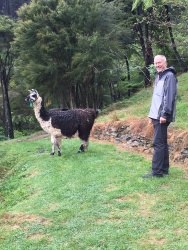 The final day we again were hesitant about the weather.  Some forecasts called for a day of steady rain and others suggested light rain.  So rather than bail out and jump in another boat, we braved the conditions and set out on the trail.

Luckily, the weather on Day Three was better than expected.  After some early morning rain, the skies stayed dry.

Along the way, we recorded the sounds of the amazing variety of birds we encountered.  Check out our video here.

Then our only need was to make it to the end of the trail by 3:30 so that we could catch the last boat back to Picton.

We were glad we bucked the weather on Day Three.  If anything that final stretch of the trail was the most beautiful of all. 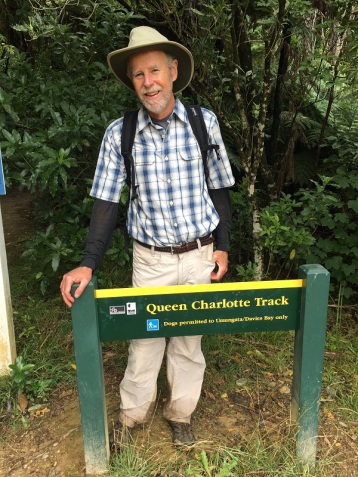 Happy to be on the return boat.  Mission accomplished.

We had completed the Queen Charlotte Trek. 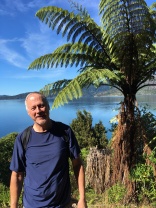 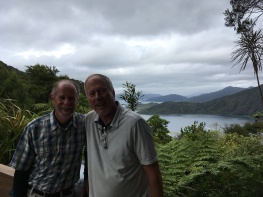 We spent a final happy and restful night in the picturesque harbor town of Picton.

The following morning we reclaimed our car and recommenced our southward journey toward Christchurch, our next destination.