Lucky us:  Really by happenstance, not due to any advance planning on our part, we had come to Auckland just in time for their annual Gay Pride Celebration.

It was not just our timing that was lucky:  Much of the activity for Pride Weekend was centered in the Ponsonby Road neighborhood where we were staying.

As part of Gay Pride Week, a local theater group staged the world premiere of a play called “Pardon Me Alan Turing.”

The performance space was in a converted warehouse on the fringe of central Auckland.  It was a bit of an adventure just finding the place on the night of the performance.  We took a long bus ride and then walked for almost a mile.

The play was staged in what is called a black box performance space.  Like everything in New Zealand, it was not crowded, nor was there any rush for seats, so we were able without difficulty to secure two seats in front row center.  Still, all the seats were filled by the time the play began.

The play was an imaginative interaction between two major figures from different eras in British history, both of whom found themselves subject to criminal prosecution under England’s harsh, Victorian-era anti-gay laws.  Both of their lives were disastrously affected.

Alan Turing’s story was depicted in an Oscar-winning motion picture called “The Imitation Game” few years ago.   He was a mathematical genius whose work helped crack the Nazi’s communication code during World War II and almost certainly helped shorten the war.  He is credited with being the inventor of the computer.

Dublin-born Oscar Wilde was a major playwright in England in the late 19th Century.  He was known for his sharp wit.

We stopped by Wilde’s childhood home in Dublin this past August.

“Pardon” depicted an imaginary interaction between Turing and Wilde, and their conversations, in turn, with a pair of lovers, a present-day journalist and law student.

The two contemporary characters collaborate in trying to obtain posthumous pardons for Turing and Wilde and thousands of others who were convicted under English law for homosexual activity.

We loved the play.  It was timely and poignant.  Criminalizing homosexual relations is a bizarre and malicious concept, and its effects on gay people are terribly damaging.

Although we live in an era when such laws have been repealed and renounced in most Western Democracies,  they remain in effect in many countries.

The human cost is tragic, and to what effect?

“Pardon Me, Alan Turning” offered a sensitive and thoughtful treatment of the issue.  We left the theater feeling reflective and emotional, surely a good measure of a play’s success.

It was a memorable experience to see a well-written play, with capable acting, staging and direction, in a new city we had never visited before.

Here we were, deep down in the far reaches of the Southern Hemisphere, so very, very far from home, in a safe atmosphere where we could hold hands in the theater and whisper intimately without fear.  We felt so happy!

On Thursday afternoon we wandered afield from our immediate Ponsonby Road neighborhood and found ourselves on “K Road” (Karangahape Road).  It is a threadbare old business district, a little past its prime, where most of Auckland’s gay clubs are located.

We stopped in one gay bar, called Caluzzi.  It was just after 4:00 PM and the place was quiet.  Everyone was very friendly to us, including a drag hostess from Malaysia whose name (as best we can recall) was Ling Ling.

The manager was a charming, tall, slender, enthusiastically friendly young Kiwi named Nick.  (Yes, he was adorable, and we were smitten; later we got to see Nick as a beauty in full drag.).

Nick said he would try to book us a table at the drag show the next evening, Friday.

He explained that the show is very popular and is typically booked out months in advance.  But he emailed us later, saying he had secured us a table for the Friday night performance.

The drag show at Caluzzi includes a full dinner, expertly and flamboyantly served by the drag queens before they begin their performance.

Back in the kitchen was a small team of cooks.  The food they prepared was quite delicious.

Somewhat to our surprise, we were the only gay men (and among the few men) in the audience.  The crowd was overwhelmingly female.  The handful of men besides ourselves were in the company of their wives and girlfriends.

It is a tradition in New Zealand, we learned, for the mothers, sisters and girlfriends of brides-to-be to host all-female gatherings prior to the wedding day.  In concept, this similar to what we in America would call a bridal shower.

In New Zealand it is called a “Hens Party,” and as we learned a drag show is a favorite place for such a gathering.

The Caluzzi performers were elaborately made up in feminine attire.  They were as campy and funny and sexy as any drag performers we have seen.

Nick had assigned us to a table in the front and center of the crowded little bar.  This was just a little disconcerting, as it made us the focus of a great many good-natured jokes and ribbing by the performers.  We did our best to hold our own.  It was a fabulous night.

We were the only Americans in the place, and we felt we did a good job representing our own nation abroad, at a fun event in this faraway port city. 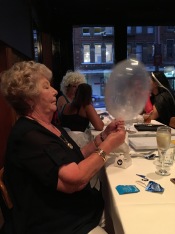 At the end of the drag show, after the dinner tables had been cleared, the small bar turned into a joyous dance party, not unlike a wedding.  It was so much fun!

It was Friday night, Gay Pride Weekend was now in full swing, and we were very happy to be part of it.

Auckland schedules its Gay Pride Parade in the evening, rather than during the daytime.  This quaint tradition seems to be unique to Auckland.

Before the parade, Adrienne hosted a little wine-and-cheese gathering in our honor.  She invited some old friends, a nice couple who live nearby, and who, like Adrienne, had remodeled one of the old Victorian cottages.

We really enjoyed the company of this small group of affable Kiwis (as the New Zealanders call themselves).  They shared lots of recommendations about things to do in our upcoming tour of New Zealand’s North and South Islands.   Kiwis love to help tourists.

Adrienne also served lasagna, so our stomachs were comfortably full as we walked the short distance up the hill to Ponsonby Road for the parade.

We purchased tickets for admission to a premier viewing area near the end of the parade route.  From there we had an excellent view of the parade, and we also got to enjoy the company of a nice crowd of people in the grandstand.

For the price of admission, we also got two drinks each.

The parade was led at the outset by a group of Maori elders.  That was a nice touch.

They were the grand marshals of the parade.

The Maori are indigenous to New Zealand, descendants of Polynesian people who arrived on these shores roughly a thousand years ago.

We were pleased when the group of elders, after completing their ride along the parade route, took the seats directly in front of us to watch the rest of the parade.

They seemed to enjoy the festivities as much as we did.

All three of the elders smiled cheerfully when we asked to take their picture.

The main body of the parade also included a healthy mix of Maori people and activities, along with people of European and Asian origin.  It made a positive impression on us.  More than other countries we have visited, New Zealand seems to have really worked on building and maintaining positive relations between its indigenous and non-native peoples.

Below is an assortment of photographs from the parade, some taken by us, others borrowed from the internet, along with a link to a video. 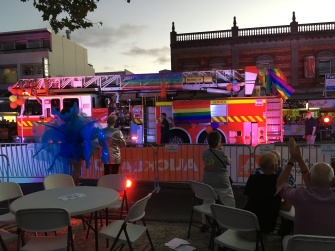 Auckland’s Pride Parade was corny, campy, sweet and affirming, in a small-town sort of way, for people of alternative sexual orientations and gender identities. 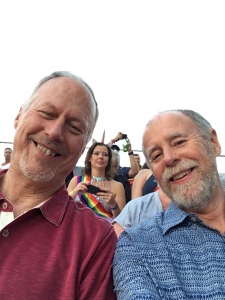 We were smiling through the whole thing.

As soon as the parade ended, the dancing began.  On a small stage right next to the grandstands from which we had watched the parade, a gay man dressed in a woman’s evening dress but otherwise entirely male, performed as a kind of singer and maestro, calling forth participants from the crowd to dance with him on the stage.   He was Maori and a great performer.

How strange that the two of us, 60-ish American men, should end up dancing on stage on Ponsonby Road in Auckland, New Zealand, before a large, noisy and enthusiastic crowd.

It was magical and it also felt like something that could not occur anywhere but in Auckland.

Alas, we have limited photographic evidence of what was for us a delightful peak experience.

Pride Night was now in full swing.  The streets were teeming with people, and it was a party atmosphere, like Mardi Gras.  All the gay bars along K Road were packed and some of them had long lines of people waiting to get in.

We finished up the night at a place on K Road called Eagle Bar.

The Eagle was crowded and noisy, but had enough space for us to slip in.  We recognized the bartender from the previous night at Caluzzi, and he greeted us warmly.  We felt like locals.

We danced at the Eagle for an hour or so before heading home.

We met a pretty and enthusiastic young woman who loved to dance.  She was great company.  She was happy to find two men who enjoyed dancing as much as she did.  We had a corner of the crowded bar to ourselves for a dance floor.

It was not terribly late, and we were not particularly intoxicated, but we went home from Gay Pride Night exhausted and happy.

The two of us slept like babies that night. 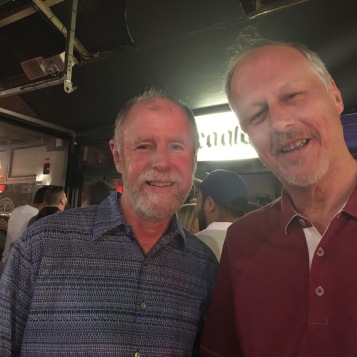