I walked down the stairs from my room to the still dark morning street below, a rifle pointed at my back by the angry Irish Innkeeper.  For hours after I would shake uncontrollably from the shock.  At 22, my first encounter with real danger had not gone the heroic way I had imagined.

fellow Chico State classmates and a smattering of post-college adults, even earning a few units for the experience by writing a paper after the trip.  As it was my first trip abroad, actually my first trip east of Reno, I tacked on a couple of weeks after the tour so that I might see more of Europe on my own.

A woman who worked at the college admin office was on the tour and also had two extra weeks.  After some prodding by her college coworkers who were also on the tour, we decided to pal together and hitchhike across Ireland.  Her name was Linda and she was on a short vacation from her husband and child.  There was no romance between us, but she was a good travel buddy.

We started our trip to Ireland by taking a ferry from Liverpool to Dublin.

Hitchhiking in Ireland in 1978 was pretty easy, especially once we got out of Dublin and headed west on the smaller roads.  Drivers would either pick us up, or make a sign with their hands letting us know they were close to their next turn so couldn’t pick us up.  We thought it very considerate that they felt they had to explain to hitchhikers why they were passing us by.  On a couple of rare times when finding rides was slow, I would leave Linda thumbing at the roadside while I explored the area away from the road.  Once a car stopped I would pop into sight and the two of us would jump in.

Lots of folks of all ages picked us up as we headed west to no place in particular.  In the afternoons, we would ask at a pub about a B&B in the village.  The pub owner would always know a widow who was renting out rooms to make ends meet.  Many of the dining rooms in these homes would feature decorative plates on the wall, including one with a picture of the pope and one with a picture of President John F. Kennedy.

After a few days we reached the town of Ballybunion on the Irish Atlantic coast.  Linda and I found a room at a small hotel in town and I went out in search of adventure.  I ran into an Irish guy my age in a pub.  He and I decided to hit a local dance that night to try our luck with the lassies.  After the dance, we were walking back into town around midnight when some of the girls we danced with pulled alongside in their car and asked us if we wanted to see their farm.  This sounded like an adventure, so we hopped in.

Their family farm was probably about ten miles out of town.  We had fun until the noise woke up the girl’s father, a man who was not amused by having strange boys in his house at 1 AM.  He woke up the girl’s older brother and told him to take us to town.  Still in his pajamas, the brother groggily and grumpily took us to town in his car.  Only after he dropped us off did we realize he had taken us to the wrong town.

I couldn’t believe my new friend’s solution.  He knocked on the front door of a house.  When a man answered the door, my pal explained our situation and the man said he was going to be up soon to deliver milk anyway and he would be willing to drive us to our town if we would just wait a few minutes for him to get dressed.  The Irish are very nice people.

Once in our own town of Ballybunion, my new pal and I said goodbye and I headed to my hotel.  Unfortunately, the doors of the hotel had been locked at 11 PM and it was now about 3 AM.  I knocked, no answer.  I went around the back of the hotel and tossed pebbles up to my room’s window, hoping to wake up Linda.  No light, no luck.  I knocked some more on the front door, dreading the idea of spending the rest of the night outside sitting by the door.

The small hotel was owned by a husband and wife.  After about fifteen minutes and some more knocks, the woman came to the front door in her robe and let me in.  I thanked her, apologized, and headed up the stairs to my room.  As I was walking up, I noticed her husband standing at the bottom of the stairs, his hands on his hips, giving me an angry look.  I continued up to the room and shut the door.

I was explaining to Linda some of the night’s adventures when a knock came.  I opened the door to find a rifle pointed at me.

Now, after watching many westerns and other adventure movies featuring heroes in similar situations, I had always assumed the appropriate action was to disarm the bad guy with some quick move.  Or maybe stand their calmly and tell the bad guy why he didn’t have the guts to pull the trigger.  Something cool like that.

Me, in that situation, I slammed the door shut and immediately jumped on top of the nearest bed and stood cowering with my back against the wall in the corner of the room, terrified.

The owner knocked again and again.  Linda opened the door and the owner insisted I leave the hotel.   Eventually I came down from the bed and again faced the man in the doorway.  He continued to point his rifle at me and told me to get out.  I marched from the room, down the steps and back into the dark night, his rifle pointed at my back.  He slammed the front door behind me.

Linda came out about five minutes later with our bags.  In shock, we walked down the quiet street to a larger hotel and the sympathetic attendant let us check in.  When I finally got into bed, I shook uncontrollably for hours.  This was my first experience with absolute, primal terror.

Today, thirty-eight years later, Frank and I are driving around Ireland and I just had to go back to Ballybunion.  I wanted to revisit the scene of the hullabaloo. 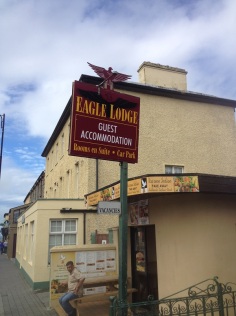 Once in town, it took us very little time to find the hotel.  Many buildings around it had changed, but the small hotel still looked the same.  There was no doubt it was the right place, because so many details were burned into my memory that night.  Unfortunately, the hotel seemed to be closed, the front door again locked to keep me out.

After walking around the building a couple of times, a middle-aged woman came to the door to find out why we were there.  I explained that I had stayed in the hotel in 1978 and I wondered if the hotel was owned by the same family.  She looked at me with surprise and said that yes, it was in the same family, and she was the couple’s daughter Eva.

I told her my story about her father and the rifle.  She was shocked and embarrassed that her father had done such a thing.  Once she realized that we not angry, she could also see the humor with us. She let us in to see the place and the stairs.

Below is Frank’s very best imitation of an angry Irish Innkeeper. 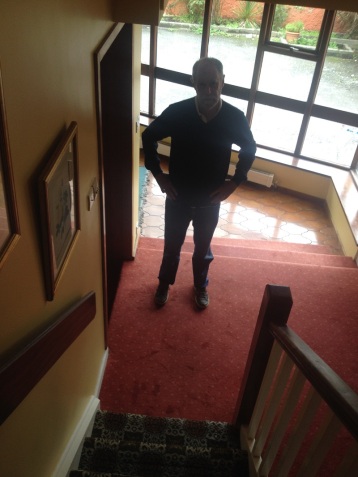 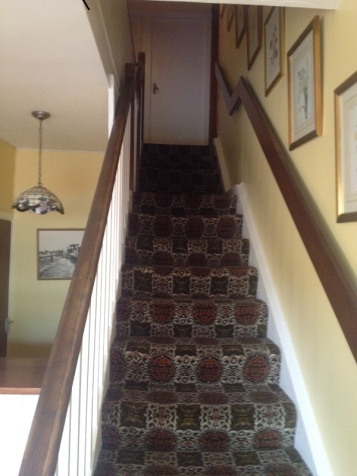 The stairs I walked back down

She explained that her father had passed away a few years before, but that her mother still lived there with her in the hotel.

While we were talking, her mother came out, the very same woman who kindly let me back into the hotel 38 years prior.

We told her the story, having to shout so that she could hear, and her reply with a delighted smile was, “Did that happen?  My, wasn’t it courageous for you to come back here!”

So there you have it. The mother and daughter were gracious and fascinated to hear the story about their cantankerous husband and father, and I got some closure on a bizarre night from my youth.

I outlived the Irish gunslinger.  God rest his soul.