Hello, Frank here, to recount the happy, nostalgia-filled three weeks I spent with my 92-year-old mother, Kate, in Glenside, Pennsylvania, in July and August.

Glenside is  a suburban town near Philadelphia.

By coincidence, Kate herself was born in a town with a very similar name, Glenties.

Glenties is in County Donegal, Ireland.

Kate is a strong, intelligent, independent, intuitive, happy, reserved, resilient and capable woman who bore and raised seven children.  Six of us survive.  See the picture above.

My young cousin Chrissie calls her “Kate the Great.”

Fourth of July in Glenside

Brian was with me on my first leg in Glenside, over the Independence Day Holiday Weekend, just after we arrived from Paris.  We enjoyed the Glenside Fourth of July Parade, which holds the claim to being the oldest continuously-held Independence Day Parade in the United States.  It is a sweet, corny, patriotic, and friendly affair. 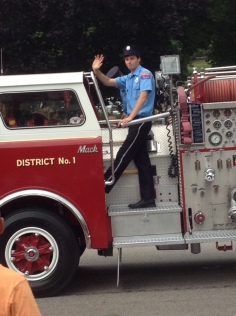 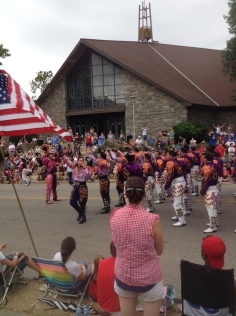 But during most of the time I was in Philadelphia, my darling Brian was out West, visiting family and friends in California and Oregon.

“Absence makes the heart grow fonder,” and indeed it does with Brian and me.

Hers is the ground-floor corner unit closest to the railroad station.  Her front door is literally just from where passengers disembark from the outbound trains from Center City.

Kate loves the privacy and the ability it affords her and her guests to come and go without being observed too closely by the neighbors in the other apartments. 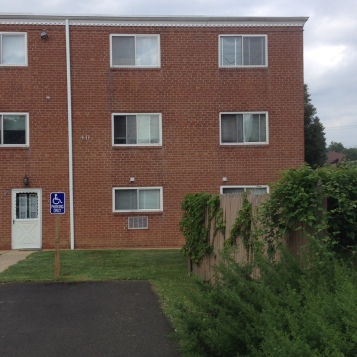 I took the photographs below steps away from my mother’s front door, at Glenside Station. 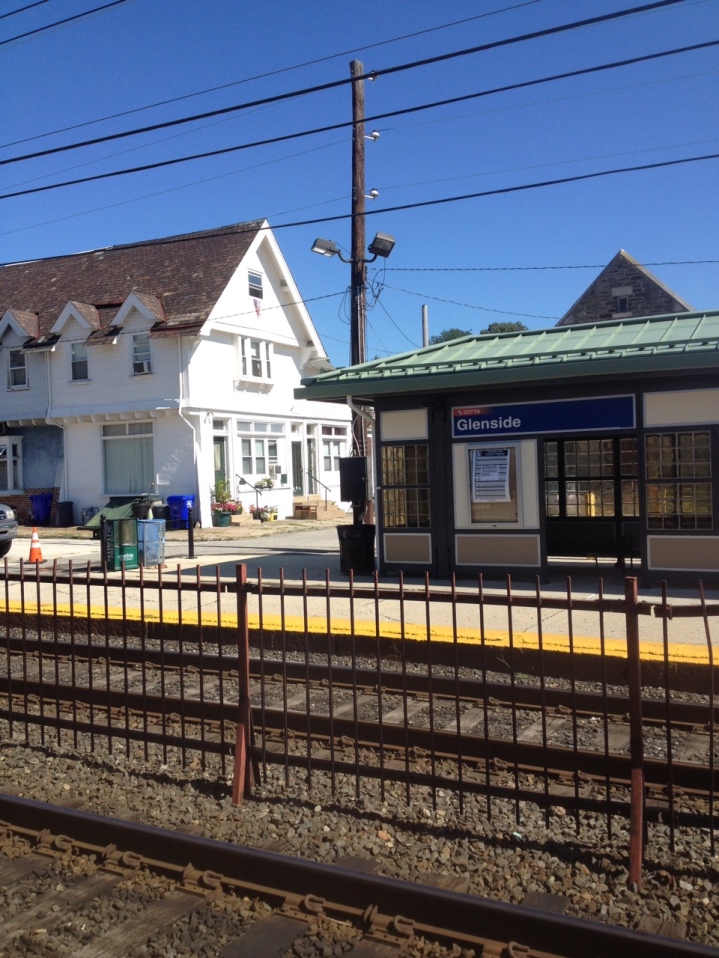 Our two bedrooms in the apartment, my mother’s and mine, faced right out on the railroad tracks.

The sound of the electric trains gliding into and out of the station take me back to my childhood. My mother’s apartment is just a few blocks away from our old family home on Woodlyn Avenue.  From there we could hear the trains, albeit at a somewhat greater distance.

The trains make a comforting sound.  Electric trains are not at all like those powered by diesel engines.   They emit a pleasant, sort of humming noise, accompanied by the rhythmic clack-clack-clack of the wheels on the rails.

My dear mother and I could sleep right through the trains as they came and went from the station, just a few yards away from where our heads lay on our pillows. 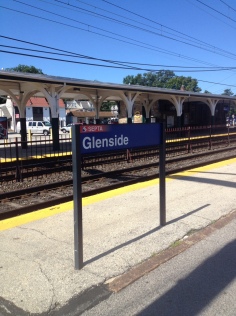 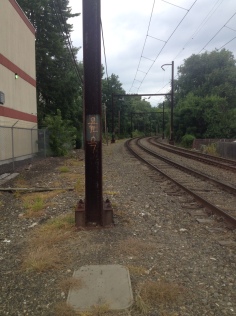 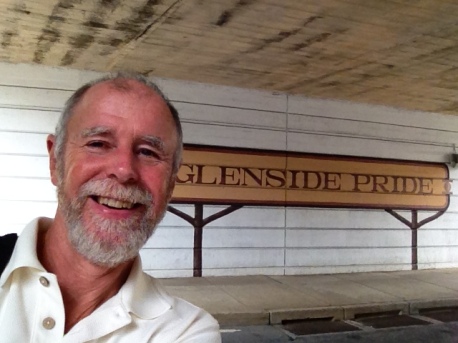 The Good Life at Kate’s

Living with Mom was pretty simple and harmonious.  My principal tasks were to make and serve meals.  Before dinner, she would enjoy a shot of whiskey on the rocks.  I would make a short one for her and a double for myself.

After dinner, we would sit at the dining room table, talking freely about all sorts of family things and old memories.  Then she would head off to bed, on the early side.  I would clean up the kitchen and fill the percolator with fresh water and coffee so it would be ready for the morning.

Kate kept telling everyone I was “in orientation” as her assistant.  Toward the end of my stay, she complimented me, saying I had finally passed orientation.

Several of the stories we shared concerned Peggy Gallagher, a close friend of my grandmother’s in the Chestnut Hill section of Philadelphia.  They met the very week my grandparents arrived from Ireland.

There are so many funny Peggy Gallagher stories it’s impossible to begin without going on.  But since Dublin was our next stop, Brian’s and mine, my mother was reminded that Peggy always referred to Dublin, in her Irish brogue, as “Dub-leeeen.”

My visit to Glenside overlapped with the Democratic National Convention, held this election year in Philadelphia.

The Convention was a great success, lots of rousing speeches, boisterous crowds, and vigorous but peaceful debate.  Even Hillary looked and sounded good.

For a Philadelphia Democrat like me Irish mudder, the DNC was wonderful.  Her television was on constantly with the news.

Another part of my daily routine in Glenside was to walk up and over the hill from my mother’s house to O’Neill’s market, a family-owned grocery store on Easton Road.

The O’Neill family home was just a couple of blocks away and around the corner from ours.  Their house was on my paper route.

When I was 16, I got a good union job at the local A&P supermarket. Jimmy O’Neill also worked there.  I was just a high school kid, but he was a grown man with a family.

Jimmy worked at the A&P part-time, as a second job.   His kids were still pretty young.  I got to know Jimmy quite well.

Jimmy and I went through an armed robbery one Friday night at the A&P, just before closing time.  We both were ordered at gunpoint to lie on the ground while the gunman forced the manager to empty bundles of cash from the safe into a canvass bag.  The robbers got away and were never caught.

Poor Jimmy was really shaken up, even more than I was.  The thought of leaving all his kids orphaned really terrified him.

Jimmy passed away a few years ago. His grown kids, who were too young to remember me as their paper boy, are now adults.  They and one or two of their spouses run the business.

I can always count on a warm greeting at O’Neill’s.  It’s a hometown kind of thing.

Speaking of the A&P, one really sweet occasion during my visit to Glenside was a reunion of several of us who worked at the A&P together nearly 50 years ago.

The participants were a girl named Terrie, her then-husband Rick, my good friend Tony, and Tony’s wife Maureen.

Terrie was married for a time to Rick, who sold me my first car, a 1966 Pontiac Tempest.

Tony was special to me.  In his early years, before his family moved to the suburbs, Tony lived next door to my paternal grandmother and her sister, my great aunt, in the West Oak Lane neighborhood in Philadelphia, where my father grew up.  Tony and I were friends at age 7, then separated until we met again at the A&P at age 16.  Voila!  Tony had grown up!

Now, 48 years later, Tony and I were reunited a second time.

In 1968, no sooner had we started working at the A&P when Tony met Maureen, a waitress at Dunkin Donuts, next door to the A&P.  Tony and Maureen started dating, got married a few years later, and now have a flock of kids and grandkids.  They are a delightful couple, still the same funny, warm people they were when we were all 16.

Terrie organized the get-together at a bar in Glenside, just a few doors from O’Neill’s market.  We chatted amiably about our A&P memories.  Many names were mentioned that I had not heard in years. It was a fabulous night among old friends.  As Tony said afterward, it was as if no time had passed.  But it’s been 48 years!

My mother’s apartment is just beyond the boundaries of my old paper route.  Starting at age 12, I delivered a now-defunct evening newspaper called the Philadelphia Bulletin.  My younger brothers and my twin brother became my partners in the operation later.

Having walked those streets so often in my childhood, in every kind of weather, they hold a special place in my memory.

I can still recite many of the names of the families that lived in the houses on my paper route.

We had literally dozens of kids in the neighborhood in those days.  The big old houses were filled with large families, mostly Roman Catholic like ours.

Within a one-block radius of our house there lived about 100 kids.  Just imagine the fun we all had!

Irish families predominated.  Below are some of the Irish surnames from Woodlyn Avenue or within a few blocks of Woodlyn Avenue during our childhood, using their coats of arms.

Today, the streets of Glenside, once teeming with kids, are strangely quiet, even during the summer.  The large families are gone, replaced with smaller families, and the relatively few kids who do live there seemed to be off at camps or day care.

But the houses are still there, and they are beautiful houses.  As Kate observed, almost all the houses in Glenside are equipped with nice porches.  She loves to quote John Clancy, my twin brother Stephen’s best friend and a neighbor from across the street.  Clancy told her once that the reason my parents bought their house on Woodlyn Avenue was the front porch.  The house just came along with it.

Here is a sampling of some of the houses in Glenside, all of them near Glenside Station and my mother’s apartment.  Several of them are located on my old paper route, and in some of them lived my classmates and friends.

Bill and Emily Quigley are very close friends of my parents.  The Quigleys are another of those large, Catholic Glenside families from my youth.

I visited the Quigleys at their home on Fairhill Avenue one warm summer evening. It was cocktail hour, before dinner.  They served gin and tonics with lime, and Emily set out a nice platter of cheeses and crackers.  We sat on their front porch in the wicker furniture. They were very interested in my travels with Brian.

I love the Quigleys.  I have a hard time calling them Bill and Emily.  I habitually revert to “Mr. Quigley” and “Mrs. Quigley.”  That was the custom in Glenside when we were growing up.

They always correct me, with a smile:  “Bill and Emily.”

My walks to O’Neill’s took me through the grounds of St. Luke’s Church and School, our home parish.  All my siblings and I received at least part of our elementary school education there.

The Catholic schools in those days were a major institution. At St.Luke’s we had about 50 kids per classroom, two classes per grade, for a total of over 800 kids.

My twin brother Steve was crippled with cerebral palsy.  We used to push him up the hill to St. Luke’s in a big old baby carriage.

In about 6th grade, the parish out of pity bought him a shiny chrome wheel chair. I could stand on the back of the wheel chair and the two of us would glide carefree down Fairhill Avenue.

One day, Sister Alma de Sales, one of the toughest of the nuns, threw open the sash of one of the classrooms in the old building and shrieked at me to stop.  The danger that alarmed her had never occurred to Stephen or me.

I have so many happy memories about those formative years at St. Luke’s.

In seventh grade, Dennis Gardiner, Nicky Farina and I were appointed milk boys.  We sorted and organized the little milk cartons for the kids who stayed for lunch.  (Many of us walked home for lunch in those days.)

It was fun being a milk boy.  We were allowed a free carton of milk each day.  Naturally we usually chose chocolate.

Next to the school is a large old stone convent.  Today it sits mostly empty, although it is still well kept. The nuns are all but gone.

The institution of Catholic education today has collapsed.  It is a mere fragment of what it was in the 1960s.

It was a precipitous decline that none of us would have foreseen.

All of this adds a measure of sweetness to my memories of growing up in Glenside.  It cannot be repeated or reclaimed.