We arrived in Seville on a Friday, and had a nice apartment for that first weekend in the historic center, which roughly corresponds with the ancient walled city under Roman and Muslim rule.  The wall is long gone, but you can tell instantly when you have entered the old city, as we did when we walked with our suitcases from the train station.

In the historic center, especially in the old Jewish Quarter where we were staying, the narrow streets are laid out in a confusing labyrinth.  It is quite ancient and very charming.  After a few small missteps, we began to learn our way around.

We really enjoyed that first weekend in Seville and the comfortable walk-up flat where we stayed.

We also continued our tradition of home cooking there, something we  described in another prior blog post.

Just outside our bedroom wall was a convent and at certain times of the day we could hear the nuns chanting their prayers.  Not all of the convents in Spain are empty!

On our first full day in Seville, we took an extended walking tour that encompassed the historic center as well as a visit to the fairgrounds downriver where Spain hosted the “Ibero-American Exposition” of 1929.

We have found these walking tours to be a really useful way of getting oriented in a new city.  It’s also a nice way to meet fellow English speakers in a foreign city.

Travelers tend to settle into their own travel patterns that work for them.  It has been our practice to book apartments fairly far in advance in the cities we plan to visit.  It gives us better selection and takes away the stress of not knowing where we will stay next.

In contrast, our son Mark (the younger of Brian’s two kids), who is traveling in Europe this spring and summer, likes to travel day-by-day, finding a hostel in a new city when he arrives.  This can open up more adventures.  Based upon Mark’s suggestion, we left our time in Seville open.  The upshot, however, was that we wound up scrambling to find an apartment only a week before we were scheduled to arrive.  We found very few places  available, so we had to split the week, staying over the first weekend in one apartment, and then moving to another on Monday for the remainder of the week.

In a scene reminiscent of the movie Being John Malkovich, however, we found Apartment No. 2 had ridiculously low ceilings.  It was literally not possible for Brian to stand up without hitting his head on the ceiling.  We momentarily considered accepting this as our fate for late planning, but resolved that we would not spend five nights in a place where we could not stand up straight.

Happily the booking agency agreed to refund our payment, which was good, but now we were stranded in Seville with no place to stay.

We retreated to a Starbucks cafe, where we had access to good wireless, and after 30 nervous minutes managed to book accommodations at Emma’s loft, which serendipitously was only a short walking distance away.

Emma welcomed us warmly into our new home, a spacious modern, comfortable loft.  She offered us wine and tapas before we headed out for dinner.

We quickly settled into a happy routine at Emma’s.  She had lots of good suggestions of things to see in Seville.

One day we rented bikes toured Seville ourselves.  We pedaled up the Guadalaquivir River, a beautiful serene waterway that connects Seville to the Atlantic Ocean.

The river was the dispatch point for many of Spain’s early expeditions to the New World after Columbus’s initial voyage in 1492, and it was back through Seville that much of the plunder of the Conquistadors entered Spain. 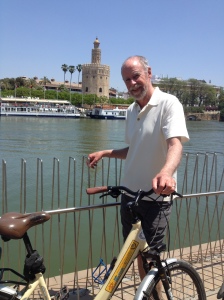 There is on the river an old Moorish tower known as the Gold Tower that was used by the Spanish, according to local lore, to receive and tax the riches that arrived from America.

On the sunny afternoon of our bike tour, there was little about this sleepy river that would suggest the enormously significant role it played in human history.

Our bike tour also took us to the big park south of the city and back to the site of the 1929 Exposition.

Nights Out on the Town

One evening, we visited Metropol Parasol, a bizarre and really beautiful structure erected in Seville about five years ago, reputed to be the largest wooden structure in the world.

As we enjoyed the view from the top of the Parasol, we met a tour group consisting entirely of gay men, all of them from the U.S. and Canada.  We felt very happy to briefly be in the company of other gay men who spoke our language.

It was interesting to consider how we are traveling mostly on our own, making our own plans and improvising as we go, and what a contrast this is to a structured tour in the company of a large group of fellow travelers.  We are happy, on balance, to go our own way.

Another night, Emma managed to get us admitted to a “Gin Party” at a riverfront restaurant just across the river from the Gold Tower.

It was a boisterous gathering of locals, most of them a good bit younger than the two of us.  The party featured a huge variety of gins from Seville and elsewhere in Andalusia, and a few from farther afield.

Somehow, as friends of Emma, we were admitted to the party free of charge, and the drinks were free too.  We were graciously welcomed by the host (pictured here), a friend of Emma’s.  We were the only Americans there, and at first we felt a little out of place, but we quickly made a whole new batch of friends.

Midway through the party, we took an excursion up the river on a small motor boat, in the company of three delightful young local women who entertained us with singing and clapping, Flamenco style.

We felt like two crazy, lucky guys to attend such a trendy, fun party, with so many genuinely nice Sevillians.

All of this was thanks to Emma.

The Darling Children of Seville

As we roamed about Seville enjoying the sites, we began to notice how happy and well-behaved the local children were.  We certainly miss our own little grandson, Benson, as we travel.  Perhaps that is why the children of Seville made such an impression on our hearts.  They were absolutely precious.

Emma’s daughters (a set of twins plus a younger daughter) were a case in point.

Here are a few of the photos we took of children who caught our eye in Seville.

After a full week in Seville, we left early one Friday morning to catch a train to Cádiz, down on the Atlantic coast.

Unfortunately, we did not see Emma as we left that day to say goodbye — it was too early — and so we left her a thank-you note along with a bottle of Ballentine Scotch Whiskey.  (She had told us her drink of choice is whiskey.)

Emma later sent us an email, thanking us profusely for the whiskey, and promising to toast us when she drank it.

Emma was indeed a most gracious hostess!  Hey, maybe Mark was right.  Last-minute planning did open our travels to adventure and meeting generous people.