The Angelus of the Dogs and Birds 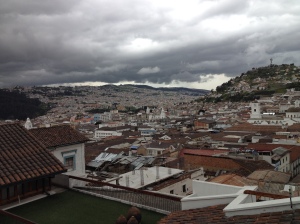 From the balcony of our apartment, the Centro Historico in Quito spread below us like a exquisite bowl.  We were on the lip, looking down into the bowl and up the other side.

Our photographs, taken from the balcony, and from our kitchen window one level down, offer a goo

d representation what we could see.  But what the pictures cannot depict are the sounds we heard. 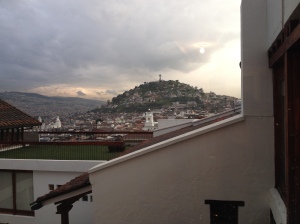 Besides car horns and car alarms (both of which are common in Ecuador), and far more memorable than these mechanical noises, are the animal sounds.

The animals in Ecuador — the dogs in the evening and the birds in the morning — announced in voice their presence to us, in accordance with what seemed like a strict schedule.

This daily ritual for me was reminiscent of the ancient Catholic prayer known as the Angelus.

In Ecuador, because it is situated on the Equator, the days are of uniform length throughout the year.  The sun consistently rises at 6:00 AM and sets at 6:00 PM.  (There also are no “seasons” as such.  There is a “dry” season and a “wet” season, to be sure (and our visit coincided with the beginning of the wet season), but Spring and Fall, Winter and Summer, are unknown here.)

After having visited Ecuador, the constancy of the sun’s relationship to the earth at the Equator, and the consequent uniform length of days throughout the year, can seem obvious. But of course the days do not grow longer in summer and shorter in winter … we are at the Equator!  The existence of this phenomenon, however, is not something that had occurred to us before, and it was therefore a strange and wonderful thing to encounter for the first time. 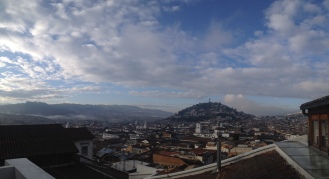 We developed a peaceful ritual of sitting on our balcony at the end of each day, weather permitting, to watch the light as it waned and the beginning of night.  We chatted happily, but we also sat in silence at times, taking in the view and the sounds.

More pronounced and memorable than the beeping horns or car alarms, more organic and far more ancient, it seemed, was the sound of the barking dogs.  Happily, there were no dogs in our immediate vicinity.  The barking we were hearing came from more distant places, scattered throughout the whole valley below and from the hillsides.  It was far enough away to be enchanting rather than annoying.

Brian said:  “‘Dalmatian puppies!'” We both laughed.  He was quoting a scene in the Disney movie from our childhoods, 101 Dalmatians, in which the community of dogs, by their barking, convey the news to one another across all of London that a litter of Dalmatian puppies has been kidnapped by the wicked Cruella DeVil.

This was the Angelus of the Dogs.  It happened every evening at the same time, as the sun was setting and just after the sun went down.  It lasted for perhaps an hour.  The dogs were having one last blast of communication before curling up to sleep for the night.  Later, after dark, the sound of their barking ceased completely and all was silent.  At midnight, if we stepped out onto the balcony, there was no sound at all from the hundreds of dogs we had heard earlier.

In the mornings in Ecuador, just before the first light of dawn, there is a similar Angelus of the Birds.  It has awakened us gently every day of our stay here. 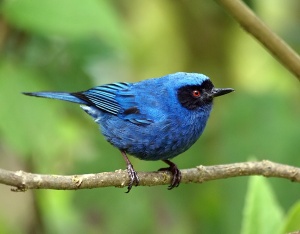 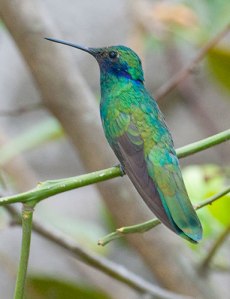 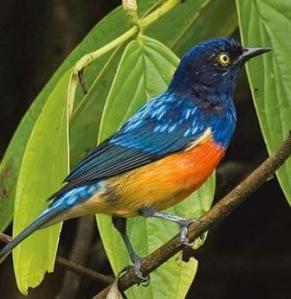 Ecuador has an amazing variety of bird species (several of them depicted here, from internet photos).  On our journey here, down in Cuenca the other day, we met and had dinner with a charming lady named Carol, from Vermont, whose traveling companion, Leslie (who we did not meet because she was off on a photo shoot in another region), is a bird photographer.  Leslie maintains a blog where she displays a beautiful collection of Ecuadoran bird photographs, most of them taken by Leslie and also a few by Carol.

The peculiar thing I have noticed about the Angelus of the Birds is that it lasts for only a finite time, no more than 30 minutes, just after first light but well before the sun rises.  It is a beautiful natural chorus.  Many of the species and their songs are unfamiliar to us travelers from the North.  The sound of all the countless numbers of birds and exotic species is like honey.  It is a gentle reminder that a new day is about to begin.

Strangely, though, after their huge burst of song, the birds each morning go completely silent.  By the time day finally breaks, there is no trace of their presence, except perhaps a stray chirp here and there.

Like clockwork, or like an Angelus, the birds of Ecuador make their sound all at once each morning, and then abruptly they stop, as if on cue from a choirmaster.

It is the same with the dogs in the evening. They bark in chorus for a time, and then they stop.

This, then, is what we will remember as the Angelus of the Dogs and Birds in Ecuador.