We spent the first weekend in March — late summer in New Zealand — in Napier, a small port city on the central coast, along the eastern shore of the North Island.

Our get-away in Napier was a perfect little seaside vacation.  At the week’s end, it was a striking and welcome contrast to our arduous mid-week hike across the Tongariro Alpine Pass, way up in the high volcanic mountains roughly 200 kilometers to the west.

Here at sea level, in Napier, all was calm and sunny.  The ocean breeze was refreshing.

We had wonderful accommodations in a modern new house in a neighborhood called Ahuriri, just a block from the bayfront.  The house would have had ample capacicty to house our large family, including our grandkids, but alas it was just the two of us. 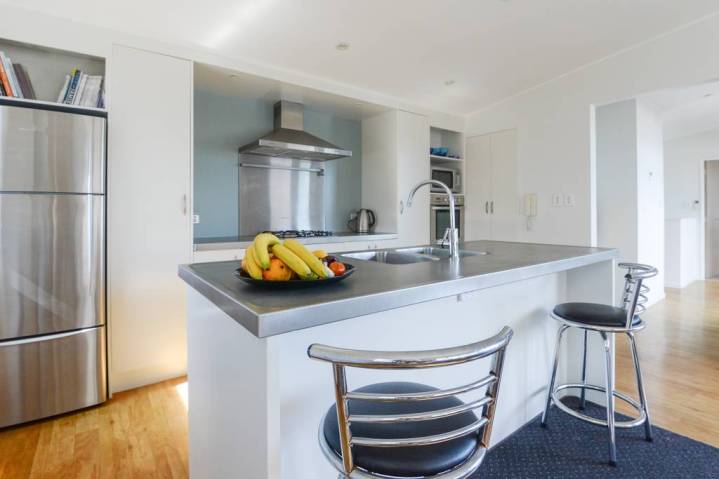 On Friday evening, we strolled out along the strand, facing the sweeping Hawkes Bay to the west.  It was a glorious moment in an absolutely beautiful setting.   Children were playing on the rock jetty among the fishermen.  Small boats were returning to port.  A large cruise ship was anchored offshore.  The sky grew pink as sunset approached.  Napier, we agreed, is a very fine place indeed.  We felt so happy being there. 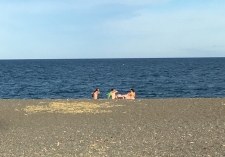 The next day we took a walking tour through downtown Napier, which fronts along the Pacific Ocean.

On thing that struck us about Napier, as in other places in New Zealand, was how uncrowded even the most touristic places are.  We had no difficulty finding a parking spot right along the beach.

Napier’s distinguishing feature is the extensive art deco architectural style of many of the buildings in the central business district.  There was a concerted effort to rebuild the city after a devastating earthquake in 1931.  The municipal leaders somehow formed a consensus to rebuild the city in the art deco style.

Today,  thanks to their efforts, Napier’s collection of art deco buildings is truly outstanding. 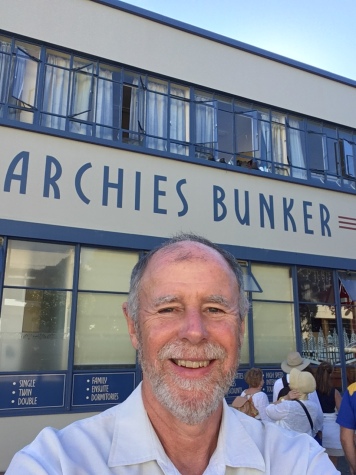 Our tour guide told a haunting story about an incident in 1931, in the earthquake.  The city’s Anglican Cathedral was severely damaged.  An elderly woman found herself trapped in the wreckage.  Her adult son and his friend, a physician, came to her assistance but were unable to extract her.  Meanwhile, a raging fire, triggered by the earthquake, was consuming the buildings in the business district and was heading rapidly toward the church. The three of them quickly arrived at a mutual decision.  The doctor injected the old woman with a fatal dose of morphine.  She died peacefully, before the fire reached her.  What remained of the old cathedral was destroyed in the fire.

Our final memory of Napier was a visit to a lookout on a hill just above the harbor.  To the east was the open ocean and to the west the beautiful reaches of Hawkes Bay.  It is a small but bustling port.  New Zealand grows large quantities of lumber on tree farms.  We saw quite a few of them on our extensive drive around the North Island.  In the port area, below our overlook, were large, neat stacks of fresh timber ready for loading onto ships for export. 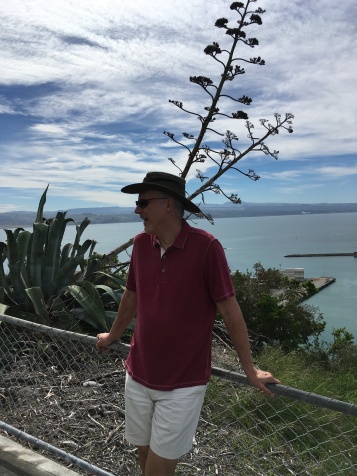 Napier is both a lovely seaside resort town and a busy, functional regional port.