The Iguazu Falls are labeled as one of the world’s seven natural wonders, but that doesn’t even begin to capture the jaw-dropping, awe-inspiring grandeur of this incredible collection of 275 waterfalls. Iguazu is nearly twice as wide as Niagara and 70 feet higher.

Located at the border of Argentina, Brazil and Paraguay, the falls are located in jungles turned into national parks, fed by rivers that resemble decent size lakes rushing in class-5 speed to their flight over sheer 260 foot high cliffs.

Our first afternoon was spent on the Argentinian side, walking the long paths and catwalks constructed through jungle and over rivers leading to the falls.  With nearly two miles of falls (that’s right, nearly two miles of falls!), it is impossible to capture the entire scene in a single photo.  After three years of California’s drought, we were amazed by the aquatic excess.  It was spectacular, waterfall after waterfall, interspersed with 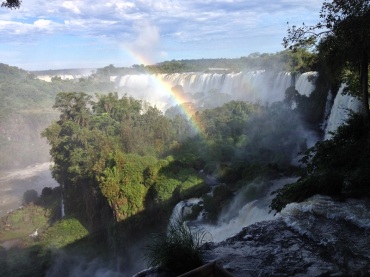 butterflies and rainbows.  Oh, and swifts (swallow-like birds) by the hundreds, moving together like a school of sardines through the heavy mist, catching bugs as they come over.  How is that as a way for a bug’s life to end?  First you land in the water, then get swept over a 200 foot waterfall, and before you even hit bottom, you get eaten out of mid-air by a bird! Quite a rush.

n the morning of our second day, we took a narrow-gauge train provided by the park up to Devil’s Gulch, the largest of the falls.  The train took us to a long walkway constructed over a massive river to the top of the drop.  It was great to see the top of the falls, to see water just before it unwittingly slides over the edge of a 260-foot cliff.

In the afternoon, we took a taxi across the border into Brazil, our 9th country so far on this year-long adventure.  We spent the afternoon visiting the Brazilian side, which features walkways to the bottom of some major falls (totally drenching closeness), but which also provides a great perspective across the river to the Argentinian falls we had visited the day before.

Below is a collection of pictures.  As you could imagine, it was hard to put down the cameras.